Nations agree on actions to save saiga antelopes

November 3, 2015 Comments Off on Nations agree on actions to save saiga antelopes 1,127 Views 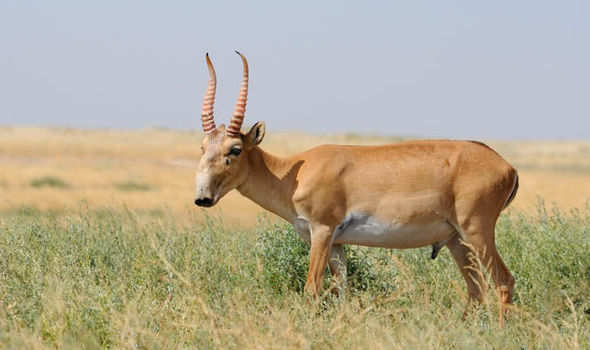 At a UN backed meeting organised by the UNEP-Convention on Migratory Species (CMS) from 26 to 29 October 2015 in Tashkent, Uzbekistan, governments and conservationists agreed on a concrete set of measures to restore saiga populations in Kazakhstan, Mongolia, Russia, Turkmenistan and Uzbekistan. More than 70 participants attended the Third Meeting of Signatories to the CMS Memorandum of Understanding concerning Conservation, Restoration and Sustainable Use of the Saiga Antelopes (Saiga MOU), which was hosted by the Government of Uzbekistan.

Latest figures presented at the meeting show that more than 150,000 adult saiga antelopes died during the mass mortality event which hit the species in central Kazakhstan earlier this year. The catastrophic collapse of this already critically endangered species has halved the global population size of this iconic migratory species of the steppes and deserts of Eurasia. New survey data also showed that the transboundary Ustiurt population between Kazakhstan and Uzbekistan is at the brink of extinction, not least due to a border fence and railroad dissecting the migration.

These findings are a major blow for conservation efforts given that saiga populations were only just recovering from an all-time low of less than 50,000 animals at the start of the century following a 95% crash in numbers. Prospects for recovery of the species are being hindered by infrastructure developments such as railway, roads and border fencing which are obstructing part of the saiga’s migration. Continuing poaching and illegal trade in and beyond range states pose additional threats to the species.

CMS Executive Secretary, Bradnee Chambers, stated: “This has been a catastrophic year for saiga antelopes. We have lost half the global population as a result of the mass die-off in May and I am devastated to learn that one of the transboundary populations is at the brink of extinction. Exceptional efforts will be required to restore the populations and we are pleased to see that countries in the region have agreed on strong actions in Tashkent to tackle the many challenges ahead.”

One of the key outcomes of the Tashkent meeting is the review and adoption of a detailed set of measures until 2020 for Range States and consumer countries. This includes the alteration of border fencing and infrastructure obstructing saiga migration, anti-poaching action and strengthened wildlife health management. The process of regular national reporting by signatory states was updated to ensure that progress and compliance with the Saiga MOU can be measured effectively. An overview report on the current conservation status of the species across all range states was reviewed and adopted.

Wildlife health management was high on the agenda of the preceding Technical Workshop, given the mass mortality event in the Betpak-dala population in Kazakhstan in May 2015. Scientists confirmed that the proximate cause of the catastrophic die-off was haemorraghic septicaemia, a sometimes fatal disease occurring in domestic buffalo, cattle and wild ruminants. Two opportunistic bacteria, Pasteurella multocida serotype B and Clostridium perfringens, contributed to the rapid die-off and loss of the entire population of saiga in each birth site in May. However, the infection was thought not to be transmitted from one animal to the next, because it independently occurred across 13 calving sites spread over 250,000 square kilometres in central Kazakhstan. This almost synchronous die-off is believed to be due to underlying environmental triggers and drivers acting simultaneous at each individual across the landscape. However, the precise factors and mechanisms remain unclear. It is likely that sudden variation in the weather at the time of each die off may have played a role and this might also implicate climate change as an underlying factor although it is too early to confirm this. Analyses continue to be undertaken by an international consortium of laboratories and research groups, which are assisting Kazakhstan in their investigations.

Both meetings were supported by the UNEP Regional Office for Europe, UNDP Uzbekistan, the Federal Ministry for the Environment, Nature Conservation, Building and Nuclear Safety of Germany, the State Committee for Nature Protection of the Republic of Uzbekistan, the Convention on International Trade in Endangered Species of Wild Fauna and Flora (CITES), Frankfurt Zoological Society (FZS) and the Nature and Biodiversity Conservation Union (NABU).

NABU, the Nature and Biodiversity Conservation Union, signed the Saiga MOU on 29 October and is now one of nine cooperating organizations, which formally support saiga conservation, in addition to all Range States. The Saiga MOU is part of the CMS Central Asian Mammals Initiative (CAMI), a framework for the conservation of large mammals across the region, which was adopted by the CMS Conference of the Parties in November 2014.