At two separate forums held recently – a presentation at the Faculty of Economics and Business of the University of Oviedo in Spain, and an acceptance speech delivered while receiving the 2016 Princess of Asturias Award for International Cooperation at a ceremony presided by Their Majesties the King and Queen of Spain – Executive Secretary of the United Nations Framework Convention on Climate Change (UNFCCC), Patricia Espinosa, described the Paris Agreement as a powerful signal of hope for a world where conflicts, humanitarian crisis and pessimism about economic prospects persist. She also lists the features of the climate pact. Excerpts: 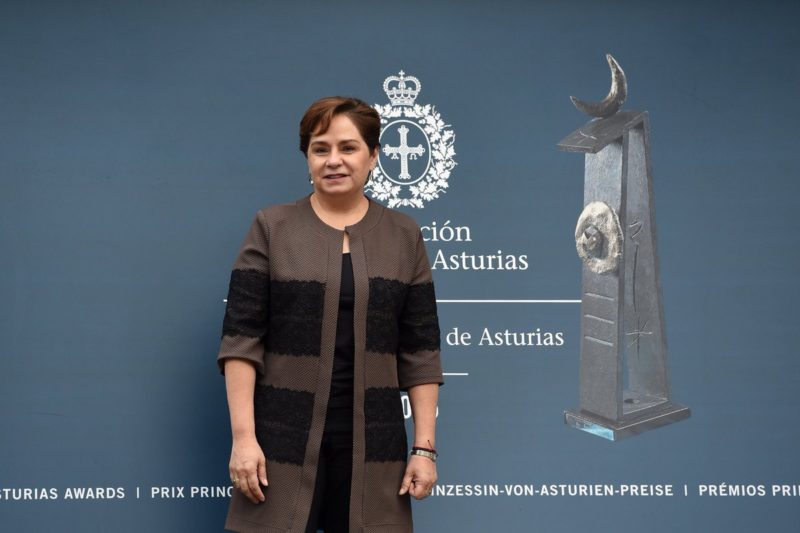 Your majesties King Felipe and Queen Letizia, today is a special day that invites us to pause and reflect about the present and the future. And my reflection today about the Paris Agreement, the path towards its adoption and the next steps, bring me hope.

Indeed, the Paris Agreement is our gift of hope. If I may, today I would like to share this gift with Her Highness the Princess of Asturias, Doña Leonor, who will soon celebrate her 11th birthday, and with all the children of the world. Today, we have in our hands the tools to work together and build not only a better future, but also a safe and sustainable present for our children and the children of all.

The Paris Agreement is a powerful signal of hope for a world where conflicts, humanitarian crisis and pessimism about economic prospects persist. The spirit of solidarity and political will to preserve our planet has continued this year.

Indeed, last week in Kigali, governments agreed to phase down HFCs, the powerful greenhouse gasses used for refrigeration and air conditioning. And just some days before, an international agreement to reduce emissions from international aviation was reached.

And of course, the ratification of the Paris Agreement in a record-breaking time allows its entry into force before the climate change conference in Marrakech in November.

The Paris Agreement is truly an agenda to transform our model of growth and development. Today, I would like to share with you some reflections about the importance of this agreement for all people in the world.

I would like to underline three characteristics of Paris Agreement.

The first one is the long-term goal in the agreement. In Paris, governments committed to limit warming to less than 2 degrees Celsius, and as close to 1.5 degrees C as possible. They also included a goal of climate neutrality in the middle of the century. This means by that time, human emissions – from electricity generation, from transportation, from manufacturing, from agriculture, and from deforestation and our management of natural resources – can be absorbed by nature.

The difference between 1.5 degrees and 2 degrees of warming may seem an insignificant goal considering that we experience much larger temperature variations every day. But when applied at a planetary scale, the impacts from a half a degree of warming are very significant.

From increased heat waves and sea level rise to reduced water availability and crop yield, every half a degree of warming implies much more devastating impacts and natural catastrophes than those we already face. In fact, the difference between 1.5 and 2 degrees may be the existence of some small island states.

For example, this temperature rise would cause the loss of two thirds of habitable land in the Seychelles. Also, limiting atmospheric warming as close as possible to 1.5 degrees would reduce negative impacts on 44 low-lying islands and coastal countries. In Spain, two degrees of warming would imply long droughts and longer heat waves, both phenomena would impact public health, food security and the economy.

The second characteristic that makes the Paris Agreement extraordinary is its universality. For the first time, all countries recognize their responsibility in fighting climate change. Without any doubt, the Paris Agreement sets obligations for developed and developing countries that must be fulfilled, and all of them without any exception recognize they must make efforts in this fight.

This was clear through the 190 plans that countries submitted before Paris, containing their intended contributions per their capacities and the challenges they face at the national level.

This means that today, in every corner of this planet, a commitment exists to reduce and avoid carbon emissions. This signifies a promise of hope for a future environment that allows stable growth for all.

Just months after submitting their initial contributions, some countries have even reviewing them to reinforce their goals. Numerous examples prove that climate action is not in contradiction with economic growth. On the contrary, many actions against climate change help achieve economic and social growth.

The third amazing characteristic of the Paris Agreement is its recognition of the role non-State actors have in the necessary, deep transformation – private sector, subnational and local governments, artists, scientists and many civil society groups and, in the end, each person.

It is a document negotiated and adopted by governments, but governments alone can’t fulfil the commitments it includes.

Increasing numbers of cities are moving to cleaner energy, reporting their emissions and investing in resilient infrastructure. Businesses are turning to efficient operations, sustainable supply chains and low-emission products. Investors are more and more looking to renewable energy, green bonds and assets that report their climate footprint to ensure stable, long-term returns.

I invite everyone to go to our NAZCA online climate action zone that documents this amazing dynamic of climate mobilisation.

The Paris Agreement together with the Sustainable Development Goals also adopted last year are the pillars of a new model for development where climate and sustainability considerations are cornerstones that protect our common house and create opportunities for all.

The Paris Agreement is more than an agreement among States, it is an agenda for transforming the future of our planet and for future generations. Every person must be part of this great transformation.

Today, I invite you to examine your lives and your futures. And I ask you to determine how you can help accelerate this transformation.

By acting on climate change today, we will protect the progress our parents achieved. We will secure a better future for ourselves and we will transform growth and development for the good of generations to come. We must find the way of transforming our communities’ ways of life and making our consumer choices more climate friendly.

Together, we can be the force for good we see so clearly in the transformative Paris Agreement.