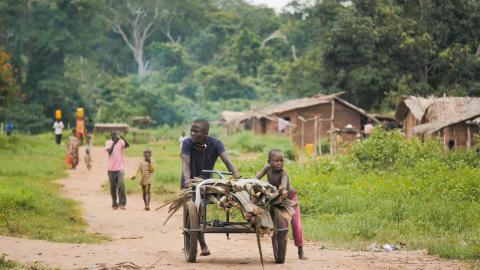 The negotiators who came to Paris from all corners of the earth for the climate change talks in December 2015 have long since dispersed. The colourful throngs of protestors are a distant memory. The world’s media have moved on to the next big story.

Now that the dust has settled on the latest international effort to prevent catastrophic rises in global temperatures, we can take stock of what the Paris Agreement, which was signed on December 12, really means for those who are already feeling climate change’s devastating effects – specifically the forest communities of the Congo Basin, home to the second largest tropical forests in the world, after the Amazon’s.

Many of them depend entirely on forests for their survival, but have been marginalised by the influx of logging and mining companies, and are now witnessing climate change threaten their food security, as wild fruits ripen prematurely, rivers dry up and subsistence hunting becomes more difficult.

Their plight has invariably been ignored in global efforts to halt emissions. Paris was a chance to rectify that. But to what extent did it succeed?

Among the large groupings at the climate talks were civil society members and delegates from the Congo Basin, with the countries negotiating under the auspices of the Central African Forests Commission (COMIFAC) and the Economic Commission of Central African States (ECCAS).

One of their central goals was spelled out by the DRC’s minister of environment: “We foresee the end of deforestation between 2020 and 2030. But someone has to pay the DRC’s efforts to re-establish its forests.”

This objective was broadly met, particularly in getting financial support for efforts to reduce deforestation in Congo Basin countries through the REDD+ (reducing emissions from deforestation and forest degradation) financial mechanism.

The Paris Agreement includes forests and REDD+ prominently with a specific provision, Article 5. This article calls on countries to conserve and maintain forests as sinks. It also recognised results based payments to forested countries, and sets a long-term goal of net zero emissions by 2050, acknowledging the importance of removals of greenhouse gases by forests.

In most Congo Basin countries REDD+ Readiness Preparation Proposals (RPPs), which set out plans, budgets and schedules for implementing the programme, clearly identify forest communities as the key drivers of deforestation, whereas in reality, the biggest threat in the Congo Basin comes from the countries’ desire to become emerging markets and industrialise their economies through large scale land acquisition activities, such as industrial agriculture,  huge infrastructure construction projects, including dams, roads, ports and railway, mining and logging.

These have huge impacts on the rights of local communities and indigenous peoples, especially on their rights to their land. So to curb this, Congo Basin countries have to develop and respect social and environmental safeguards when implementing REDD+ and they must be monitored, reported and verified.

The Paris Agreement does recognise indigenous peoples’ rights, calling for “knowledge, technologies, practices and efforts of local communities and indigenous peoples related to addressing and responding to climate change” to be strengthened.

As welcome as this is however, a note of caution is needed, since this – and other references to indigenous’ rights – are in the non-binding section of the text and therefore carry no legal weight. It’s been suggested this is because the EU, the US and Norway were uneasy about the legal liability of any binding recognition of rights.

The Norwegian government announced during the COP that it was making $100 million available for initiatives respecting the rights of local communities and indigenous peoples, while Sweden has committed 11.5 million EUR to the tenure facility initiative, aimed at facilitating land and forest tenure for local communities and indigenous peoples in four countries, including Cameroon.

In a side event at the talks, the Central African Forest Initiative (CAFI), called for more countries to sign its joint declaration to tackle the causes of deforestation in Cameroon, the Central African Republic (CAR), the Democratic Republic of Congo (DRC), Equatorial Guinea and the Republic of Congo (RoC). CAFI is made up of these six countries and various donors, including the European Union (EU) and World Bank, and aims to bring “new urgency to efforts to slash greenhouse gas emissions from deforestation”.

In summary, the Paris agreement and the financial incentives and initiatives it has spurred, can help put indigenous and community rights at the heart of forest policies in Congo Basin countries. Yet this will be at the whim of individual national governments.

And for them to act will require field monitoring, effective participation at REDD+ debates and processes, as well as concerted pressure and vigilance from communities, civil society and campaigners.

This presents a huge challenge in a region where rights over ownership, management and control of the forests have been denied to communities for so long and where deforestation continues to wreak havoc with peoples’ lives and the environment.