Developing countries’ economies face being crushed under the double burden of climate change adaptation costs of almost $800 billion and more than twice that in economic losses every year by 2050 if pledges to cut emissions are not improved, Oxfam warned on Wednesday. 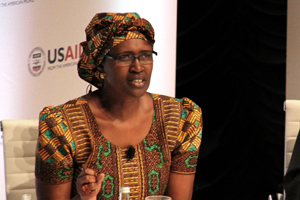 In a new report released for COP21: Game-changers in the Paris climate deal, Oxfam sets out seven steps to a Paris deal that will better protect poor people from climate change.

The international agency reveals that in a world warming to 3 degrees developing countries are set to face an additional $270 billion more a year in adaptation costs by 2050, taking the total to $790 billion. That means more than 50 per cent more could be needed for developing countries to protect themselves from climate change than in a 2 degree scenario, which leaders meeting at the UN climate talks in Paris are aiming for.

Developing countries also face losing $1.7 trillion annually to their economies by the middle of the century if global average temperatures rise by three degrees. This is $600 billion more than if warming was contained to 2 degrees – four times more than rich countries gave in development aid last year.

Oxfam’s Executive Director Winnie Byanyima said: “We are seeing growing momentum for a climate deal but what is on the table so far is not enough. Our report today shows the scale of the challenge facing the world’s poorest people as a result of climate change – which they have done very little to cause.

“World leaders need to step up. We need further cuts to emissions and more climate funding so vulnerable communities – who are already facing unpredictable floods, droughts and hunger – can adapt to survive. The human cost of climate change must be central to discussions in Paris so we get a better climate deal for poor people.”

Even now, if all of today’s public adaptation finance were to be divided among the 1.5 billion small-holder farmers in developing countries, they would get the equivalent of just $3 a year to protect themselves from floods, severe droughts and other climate extremes – the cost of a cup of coffee in many rich countries.

The pledges by more than 150 countries to cut emissions, known as INDCs (Intended Nationally Determined Contributions) are expected to be the cornerstone of a Paris deal. But even if these targets are met, the world is likely to experience devastating warming of around 3 degrees. This could come despite the UN’s goal of 2 degrees, let alone the 1.5 degrees that more than 100 developing countries and Oxfam is calling for.

Currently, climate funding commitments to help poor countries adapt and develop in a low carbon way only run until 2020. At the same time, little progress has been made in agreeing how much will be available after this date, which needs to be urgently addressed in Paris.

More funding is also needed if the promise of $100 billion a year by 2020 made six years ago in Copenhagen is to be kept. More of this needs to go towards adaptation, which remains woefully short. Oxfam estimates that public climate finance was around $20 billion on average in 2013-2014 but only around $3-5 billion was dedicated for adaptation – less than the 50 per cent minimum that Oxfam says is needed.

In its new report, Oxfam shows how the international context has changed since the ‘failed’ talks in Copenhagen. This includes a US / China deal on climate change breathing new life into the talks, spectacular growth in renewables, and interventions from high profile figures like Ban Ki-moon, Pope Francis and Islamic clerics. The INDCs have also been important in shaping the deal, but it has been most of the developing countries – including India and China – that have either met or done more than their fair share in pledging to cut their emissions. The world’s richest countries need to do more.

The report also pin-points what developments are possible in Paris to make the deal a better one for poor people.  This includes:

Byanyima said: “The Paris deal needs to be a solid foundation for further global action to tackle climate change, and the more we see poor people at its heart, the stronger it will be.”

Oxfam is calling for progress on climate finance, especially for adaptation and women who need it most, and greater ambition to cut emissions.

Previous: World takes to the streets ahead of Paris climate summit
Next: Ogoni youths graduate from Shell-sponsored training for farmers

Lessons for climate action from Covid-19 responses to the vulnerable

The Covid-19 pandemic has been on the frontline globally in the last few months. The ...