The General Assembly of Oilwatch, which is celebrating its 20 years of existence, met recently in Quito, Ecuador in the framework of the Social Forum Resistance to Habitat III. In this declaration, the group frowns at the Habitat concept as well as the newly-adopted New Urban Agenda, saying that they encourage land grabbing and oil extraction. Oilwatch is thus demanding a “de-petroleum-ised habitat”. 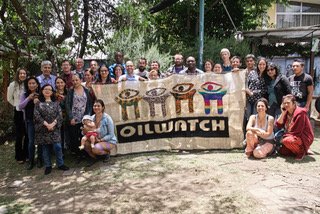 The United Nations Conferences on Human Settlements held in Vancouver in 1979,  Istanbul in 1996, and Quito in 2016 are a clear testament to the relationship between the oil industry and the global urbanisation agenda: expanding cities are the motor, justification and destination of hydrocarbons and their derivatives; constitute a source of energy; and allow for the profits and power of the oil, gas and coal industry, the vast car, petrochemical and mining industries as well as speculative financial capital to increase. This urban model is an expression of the oil civilisation and is profoundly linked to the global environmental crisis.

Both the slogan and objective of the New Urban Agenda open the door to new patterns of “sustainable and responsible” production, distribution and consumption of Nature and human labour; the sacrifice of bodies and territories to the extraction of oil, gas and coal, other sources of energy and inputs for the petrochemical industry.

Habitat III promotes and imagines a global future which is essentially urban, ignoring the importance of rural territories and the contribution of indigenous and peasant communities to sustaining life on Earth. Habitat III justifies land grabbing and the expropriation of the territories of ancestral peoples; the emptying of territories to provide raw material for industry; and the urbanisation of the rainforests, forests and peasant communities with projects such as “housing for the poor”, Millennium cities and other projects that are presented as part of social agendas, conservation or “offsets.”

The Green Economy is proposed as a way of addressing the habitat crisis; a discourse of “sustainability” is imposed; and projects like biodiversity and carbon offsets are promoted, which are nothing more than strategies for perpetuating the primacy of the market and allowing those responsible for the crisis to avoid their responsibilities. These projects justify the destruction, demobilise and displace communities, and generate profits for companies with new business ventures, while oil capitalism gets stronger and more entrenched.

The aggressive processes of urbanisation are always based on millions of cars, cause evictions, displacement and invasions both in the cities as well as in the territories of extraction.  The agenda of urban growth with the construction of highways, super-car-ification of society and related infrastructure, is above all a function of the expansion of the extractive frontiers of new and old hydrocarbon companies with new and old technologies.

In the framework of the petroleum-isation of habitat, the omission in the discussion of the following issues is of particular concern to Oilwatch:

The new technologies linked to the oil, gas and coal industries’ prospecting, extraction, transformation, and management of waste, instead of protecting Nature and respecting the rights of communities, increase risks and adverse impacts. The extraction of extra heavy crude, natural gas and oil from fracking; the extraction of coalbed methane; coal and oil mining; the deep-sea drilling, the biotechnology for the oil industry and the expansion of the petrochemical industry have similar or even worse impacts than those already registered on the planet.

The new frontiers of oil, gas and coal extraction are national parks, indigenous territories, coral reefs, deep seas, glaciers and other zones of extreme vulnerability, as well as the bodies of the workers and peoples near these projects. Destroying these areas not only means the loss of humanity’s heritage, but also unleashes uncontrollable forces of Nature. The industries linked to hydrocarbons, including the oil, services, mining, car and petrochemical industries are putting criminal pressure on the planet and her peoples. It is imperative to establish the chains of responsibility and act to stop these ecocides and ethnocides.

The extractive frontier is expanding even into cities, causing accidents, spills, pollution, land grabs and other adverse impacts, and posing enormous risks for life on Earth.

The extraction of coal, oil and gas not only has provoked the planetary climate crisis, but is also provoking extreme disasters, to a great extent because of the experimental technologies that are being used. For example, fracking is linked to the generation and increase of earthquakes and explosions. Deep-sea drilling and in situ combustion pose grave risks for workers and territories. The cities, which continue to expand, are hyped as spaces of security, wellbeing and salvation for people who are slated for displacement, but they are really spaces of collapse where the worst climate crises are unfolding.

The last of the indigenous peoples in voluntary isolation that live in the Amazon rainforest and the Gran Chaco of South America, the communities of the forests of the Congo basin, the pastoralists of the African continent, the ethnic minorities of Arakan in South East Asia, the artisanal fisherfolk and hunter-gatherers, among others, are under siege by development plans and the extraction of minerals and hydrocarbons.

In the last couple of months in Bolivia, Ecuador and Peru, seismic exploration and the extraction of heavy crude are taking place in the territories of indigenous peoples in voluntary isolation. These peoples must be prioritized for protection by the United Nations, and urgent action must be taken to immediately stop the oil projects that threaten their existence.

Oilwatch works for a post-oil civilisation, to de-fossilise the economy and to decentralise and diversify energy, to de-petroleum-ise the industrial food system, de-urbanise the life of our societies, to promote mass transit, to protect the territories/communities and restore the waters, bodies and forests.

Oilwatch demands that the United Nations block the influence of corporations in the international decision making arena; control and sanction them for their crimes, and make the relationship between the hydrocarbon and car industries and the urban growth agenda transparent.

Oilwatch recognises that the men and women defenders of Nature are the ones who are acting responsibly towards our habitat, and demand an immediate end to the criminalisation, harassment, stigmatisation, smear campaigns and criminal charges brought against nature defenders.

Oilwatch celebrates the ways that Nature rebels by returning rivers to their natural paths, preventing the discovery and extraction of the fluids of the Earth (the blood of the Earth according to indigenous peoples) and slowing down urban expansion.

Oilwatch is open to building alliances with urban organisations to jointly promote new ways of living together, which are in harmony with Nature, respectful of societies, build solidarity, democracy and life plans based on common ground and the collective good.