Ocean surge in Lagos, govt advises residents to keep away

August 9, 2013 Comments Off on Ocean surge in Lagos, govt advises residents to keep away 925 Views

There was panic in Lekki Peninsula area of Lagos State in the early hours of Thursday as the Atlantic Ocean overflowed its banks.

Residents and early morning callers to the Lekki Beach noticed the rising level of the ocean waves and raised an alarm.

According to an eye-witness, a lady narrowly escaped being swept away when the waves suddenly took over her, but she held on tightly to a coconut tree to the surprise of many who thought she has been washed away by the raging water.

Also affected were the premises of nearby Silverbird Television, a private television station as water flowed into the organisation’s compound.

Residents expressed fears over the adverse effect of the development, prompting state officials to assess the site. They asked those within the beach to vacate the area, warning that the surge would likely get worse.

Experts have attributed the surge to rising sea level occasioned by melting polar ice due to global warming.

Warning that danger looms in the beaches and its environs, General Manager/CEO, Lagos State Emergency Management Agency (LASEMA), Olufemi Oke-Osanyintolu, attributed accidents and emergencies that occur during festive periods to the nonchalant attitude and carelessness of the people.

He warned Lagosians to be safety conscious and stay away from the affected areas especially Lekki Beach, Alpha Beach and Elegushi Beach. He added that the tidal waves began at 3am and lasted till 6am, and said a repeat of the wave might cause damages to the beach’s environ.

But the Public Relations Officer, National Emergency Management Agency (NEMA), South-West Zone, Ibrahim Farinloye, debunked claims that ocean surge is to blame for the flooding of the Lekki axis of the state. He added that only turbulence was experienced.

He said: “Contrary to claims, there was no flooding in Lagos or Lekki and, if there was, we would have been alerted. The only alert we received today was concerning the ocean surge.

“Some environmentalists had contacted NEMA to warn members of the public not to swim in the ocean or any of the beaches due to the turbulence from the ocean.

“Although the surge does not mean that they cannot visit the beaches, they are urged to stay away from the water because such surging waves carry whatever is in their path.”

He said the agency initially did not want to raise the alarm and cause panic, but was more interested in doing a deeper assessment of the surge with a group of experts from different agencies.

Farinloye said: “For now, we want people to keep out of the water till proper and deeper analysis is done and then measures to ameliorate the effect are put in place.

“Ordinarily, all beaches are supposed to have medical centres in them but, at the moment, only about two have such facilities and that is why a stakeholders’ meeting billed for next week will tackle such issues.”

On whether the surge was exacerbated by the Eko Atlantic project, Farinloye said that was part of what the experts would assess and discuss during the stakeholders’ meeting and then work on ways to ameliorate the effects of the project on the ocean.

When contacted, one of the environmentalists who had alerted NEMA, Sunny Osaghale, said they were forced to bring it the agency’s attention because of the alarming height of the waves.

He said: “We had to say something because some people are ignorant and they think they can swim in the ocean the same way they swim in the pools.

“Ordinarily, when the ocean is choked, it will surge on the sea reservoirs which are the shorelines, but the shorelines in Lagos have been washed away and what is left is weak and that is why the ocean overflows the banks.

A university don, Dr. Dupe. Olayinka, raised doubts over the safety of Eko Atlantic City, a mixed-use estate being built just off the Bar Beach on land reclaimed from the ocean. It is being championed by the Lagos State Government. When completed, the project, which is billed to cover some nine million square metres of reclaimed land, would be home to about 250,000 people.

Olayinka as well as several other scientists believe that the Eko Atlantic City project is a major cause of the increasing incidence of ocean surge being experienced within the area and surrounding vicinity. 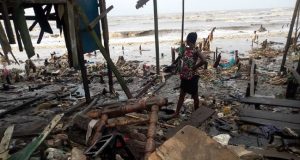 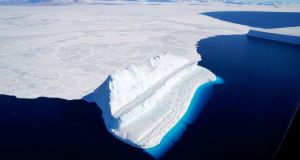 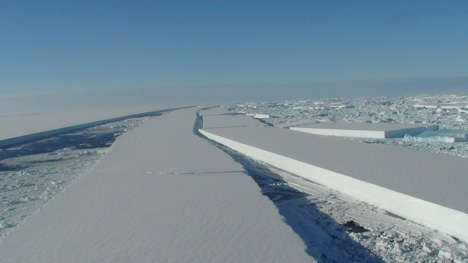 A rapidly advancing crack in Antarctica’s fourth-largest ice shelf has scientists concerned that it is ...