President Muhammadu Buhari has said that his signing of the Paris Agreement on Climate Change has demonstrated Nigeria’s commitment to a global effort to reverse the effects of the negative trend. 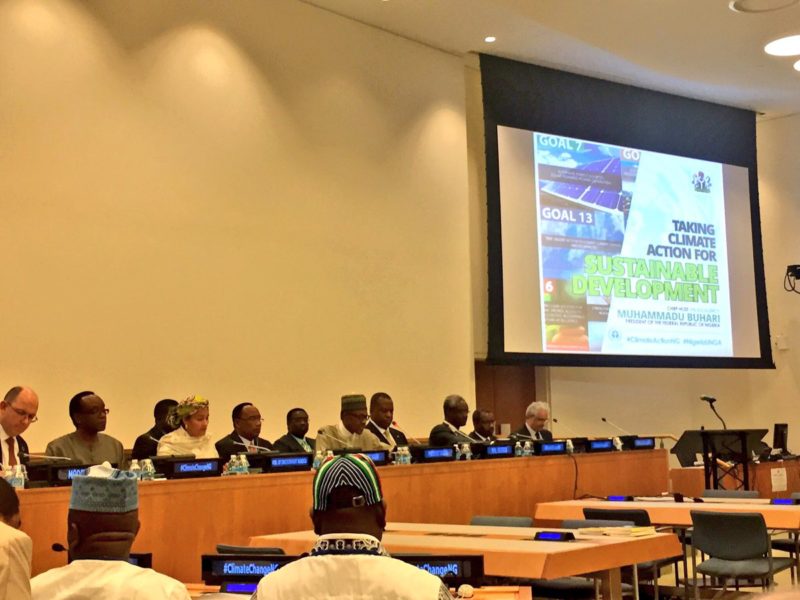 Mr President and participants at the meeting on Taking Climate Action for Sustainable Development in New York. He says his signing of the Paris Agreement on Climate Change has demonstrated the country’s commitment to a global effort to reverse the effects of the negative trend

The President said this while addressing the opening of the meeting on Taking Climate Action for Sustainable Development in New York, co-hosted by Nigeria and the United Nations Environment Programme (UNEP) as one of the Side Events of the 71st Session of the United Nations General Assembly (UNGA71).

President Buhari had, shortly before this event, signed the Paris Agreement, where he committed Nigeria to reducing “Green House Gas Emissions unconditionally by 20 per cent and conditionally by 45 per cent” in line with Nigeria’s Nationally Determined Contributions.”

ALSO READ:  Building back better: Green jobs to the rescue

Describing the signing as historic, he also expressed confidence that, with support from development partners, Nigeria would meet stated targets.

The President also promised to ensure the ratification of the Paris Agreement before the 22nd Session of the Conference of the Parties to the UN Framework Convention on Climate Change (UNFCCC) holding in Marrakesh, Morocco in November 2016.

He stressed that it was to demonstrate his personal dedication to the process of implementing the Agreement that he was hosting the side event on Taking Climate Action Towards Sustainable Development.

President Buhari, who said he was privileged to have been part of the Paris Agreement, expressed appreciation to what he called “the genuine efforts by President Francois Hollande of France in drawing global attention to reviving the Lake Chad Basin,” and for galvanising the political will that led to the global consensus in reaching the Paris Agreement.

The Nigerian President said his country’s commitment to the Paris Agreement is articulated through its Nationally Determined Contributions (NDCs) “that strive to build a climate resilient society across the diverse terrain of Nigeria. We have instituted an Inter-Ministerial Committee on Climate Change to govern implementation of my country’s NDCs, thereby ensuring a strong cross-sectoral approach, coherence and synergy for Climate Action.”

President Buhari, while admitting that implementing the Roadmap would not be easy in the face of dwindling national revenues, however, indicated that both internal and external resources would be mobilised to meet Nigeria’s targets. He added that the 2017 Budget would reflect Nigeria’s efforts to accord priority to realising its NDCs.

“In addition, we are set to launch our first ever Green Bonds in the first quarter of 2017 to fund a pipeline of projects all targeted at reducing emissions towards a greener economy,” he said.

While urging global support to transit to a low-carbon climate resilient economy, the President specifically reminded industrialised nations “to play their role and deliver on their commitments on access to climate finance and technology transfer and help with capacity-building,” adding that, “Expectations are high for their leaders to deliver $100 billion per year by 2020 in support of developing countries to take climate action, thus keeping the promise to billions of people.”

President Buhari, who thanked the Presidents of Chad, Cameroon, Democratic Republic of Congo and Niger for attending the event, also called on the international community to “give special recognition to the plight of Lake Chad and support our effort to resuscitate the livelihoods of over 5 million people in the region. This will reinforce our efforts to reintegrate the thousands of Boko Haram victims and returning Internally Displaced Persons (IDPs).”

The President noted that the Niger Delta region is a unique biodiversity rich in coastal environment that is highly prone to adverse environmental changes occasioned by climate change, such as sea level rise, coastal erosion, exacerbated by poverty and many decades of oil pollution leading to loss of livelihoods and ecosystems.