The Minister of State for Environment, Alhaji Ibrahim Jibril, says the Federal Government is working on a national policy on plastic waste management to regulate use and disposal of plastic waste in the country. 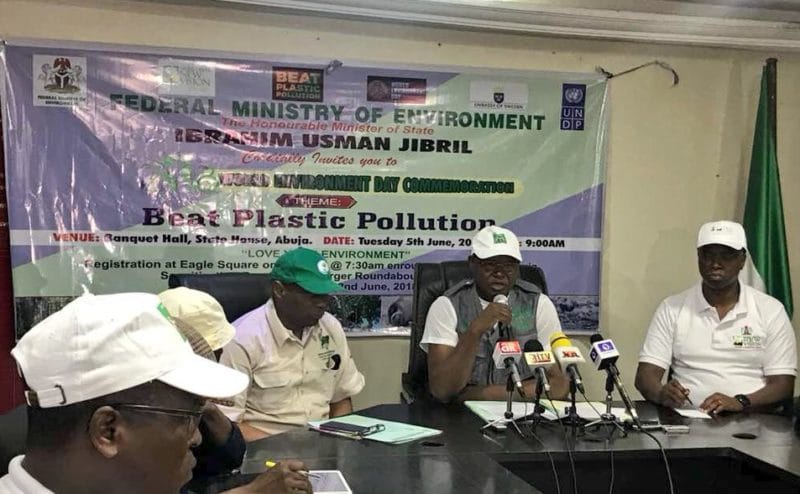 Jibril made the announcement on Saturday, May 2, 2018 in Abuja at a news conference to begin the commemoration of the 2018 World Environment Day (WED), to be celebrated on Tuesday, June 5.

The theme of this year’s celebration is “Beat Plastic Pollution’’.

The minister said that the present administration attached much importance to the development of the environment.

“It is for this reason that this year’s WED celebration main event of June 5 will be personally graced by Vice-President Yemi Osinbajo as the special guest of honour,” he said.

The minister said that the Federal Ministry of Environment, in collaboration with critical stakeholders, had developed a national strategy for the phase-out of plastics, which are non-bio gradable.

“At present, a total of eight plants have already been completed and handed over to the states while 18 others are at various stages of completion.

“In addition, the Federal Government is also collaborating with State Governments to establish plastic waste recycling plants under the community-based waste management programme in the ministry.

“Therefore, two plants have been completed in Ilorin, Kwara State, one in Lokoja, Kogi State, while work on another is ongoing in Karu Local Government Area of Nasarawa State.’’

He listed other locations of the plants as Bola Jari in Gombe State and Leda Jari in Kano State.

Jibril said the establishment of the plants would assist to turn waste to wealth and ensure the sustainability of the environment.

The minister solicited the support of the media to educate Nigerians on the effects of plastic pollution and the need to reduce, reuse and recycle plastics.

ALSO READ:  Togo urged to end use of dental amalgam by 2020

He said that the Federal Government had rolled out a timetable for the Ogoniland clean-up, adding that 140 out of the over 400 contractors that bided for the clean-up were pre-qualified.

“We have developed a robust programme for Ogoniland clean-up. We have rolled out the time table.

“We are hoping that by the end of August and early September, we would have finished all the procurement processes for contractors to move to site and start the actual remediation and cleaning exercise.

“The advertisement was done in April. We had more than 400 contractors who indicated interest.

“The preliminary figure is giving out a figure of about 140 contractors that are pre-qualified. These are the ones that when we finally get the figure, we will give them or invite them to submit their financial base.’’

The minister noted that the process would be continuing throughout the months of June and July.

He expressed hope that by August, it should be able to get to the Federal Executive Council for approval for any remediation consultancy that would be awarded.

According to him, development partners and joint venture oil companies are now at the last stage of populating their accounts with funds that will be used for the cleaning.

“So, we are on track and we expect to do what we can within the framework of what we are doing now.

“I am glad to announce that we were awarded a prize in UK for our initiative on the Green Bond. This is the first green bond to be issued in Africa.

“We are making moves to list it in the Nigerian Stock Exchange and in a couple of weeks, it will be listed.

“The implication of this listing is that people, who are not privileged at the first issuance in December, 2017 can now go through third party and access the bond and trade in it.

“This means that there is investors’ confidence with what we are doing,’’ Jibril added.