October 18, 2018 Comments Off on Nigeria seeks support for re-election into ITU 1,113 Views

Nigeria’s belief in multilateralism and readiness to serve as exemplified by its many international commitments makes its bid for re-election into the International Telecommunications Union (ITU) worthy of support from countries within Africa and the globe, the Ambassador/Permanent Representative of the Nigerian Permanent Mission in Switzerland, Ambassador Audu Kadiri, has said. 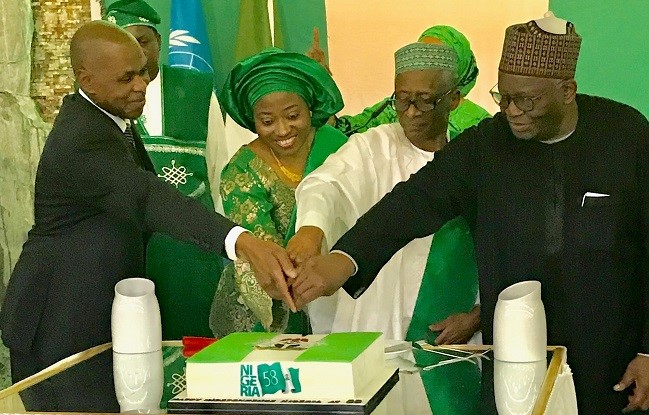 Ambassador Kadiri, while hosting heads of permanent missions and international agencies in Geneva to commemorate the 58th anniversary of Nigeria’s nationhood, said that keen observers of Nigeria’s external exertions would easily notice that its two key geo-political underpinnings in foreign policy are Africa’s economy and population size.

He explained that Africa as centre-piece of Nigeria’s foreign policy has been propagated and upheld by successive administrations since Nigeria’s independence in 1960, and that Nigeria’s commitment to advancing the cause of Africa and the black race are seen in a host of areas. They include its contributions to decolonisation of Africa, promotion of peace, security and unity on the continent, the pursuit and facilitation of socio-economic development in Africa, and the initiation and support for sub-regional and regional integration in Africa.

Nigeria is also involved in peace support operations in Africa and globally, as well as dedication to the cause of people of African descent.

The Ambassador noted that President Muhammadu Buhari’s October 1, 2018 speech to the nation where he remarked that Nigeria would continue to support initiatives aimed at addressing current global challenges such as terrorism, trans-border crime, climate change and poverty, among others, underpins Nigeria’s faith in multilateralism in addressing the issues.

He added that Nigeria has served meritoriously in the United Nations Security Council and other governing councils of organisations and agencies in the UN system and is willing to do so given the opportunity again.

“It is for this reason that Nigeria is currently seeking the valued support of fellow African countries for its re-election into the Council of the ITU as well as the election of Nigeria’s candidate Mr. William Ijeh as the Director of the ITU’s Telecommunications Development Bureau (BDT) at the impending Plenipotentiary Conference billed for October 29 to November 16, 2018 in Dubai, the United Arab Emirates.”

The event was graced by the Dean, African Group of Ambassadors, Geneva, Ambassador Malloum Bamanga Abbas of the Chadian Permanent Mission, Geneva and Nigeria’s former Foreign Minister and former Under-Secretary General of the UN, Professor Ibrahim Gambari, as well as Heads of International Organisations and agencies.

Like Loading...
2018-10-18
admin
Previous: Top five sustainable stadiums in the world
Next: All set for GOCOP’s second annual conference