September 17, 2012 Comments Off on Nigeria floods: Disaster sweeps across the land 1,717 Views

Fears and apprehension have been the order of the day in several cities along the course of major rivers nationwide, no thanks to the rampaging floods. 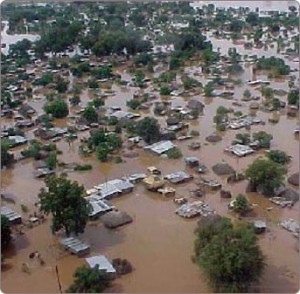 For instance, concerns have heightened in the commercial city of Onitsha in Anambra State and the neighbouring Asaba in Delta State, which is just by the other side of the River Niger. States such as Kogi, Kwara and Niger are not exempted from the disaster, which was preceded by a warning by the National Emergency Management Authority (NEMA) that the river would over flow its banks and cause severe devastation along its coastal line.

In Anambra State, Ogbaru Local Government Area (LGA), Uga Junction, Atani and Okpoko Area are seriously affected by the flood, leaving behind a tale of woes as it ravaged over 750 hectares of rice and yam farmland and submerged four other communities in Ayamelum in Anambra West LGAs.

Residents of the communities, which are close to the confluence of Omabala and Niger rivers, were said to have woken up two days ago to behold their farmlands submerged by the flood.

In Niger State, the flood was said to have affected 14 of the 25 LGAs in the state.

Director-General of the Niger State Emergency Management Authority (NSEMA), Mohammed Saba, said in Minna on Friday that the greatest challenge facing the agency in the state is the refusal of most communities to vacate flood plains due to agricultural potentials.

“We have been trying to evacuate communities along the river banks we consider vulnerable to flood but the greatest challenge we are having is that many of them are not willing to leave the flood plains for a safer havens,” Saba said.

According to him, communities living along the river banks have rejected the offer to move to higher grounds to avoid being washed away by the flood.

In  Kwara State, the government has asked residents of Kosubosu and Jebba communities on the banks of the River Niger to relocate so as to avoid being submerged.

The NEMA had, as a result of the continued threat by the river, issued an alert, urging those living along the river’s coastline in the state to relocate. The organisation said that there is a risk of flooding from Jebba and Kainji dams and advised the affected state to evacuate the people within the area the flood may affect.

The Kwara State Commissioner for Environment and Forestry, Samuel Bamisaiye, in an interview, said the government did not want any resident in the state to suffer flood disaster forecast hence the call on the people to vacate the banks of the river.

The dreaded, but long-awaited impact of the release of water from Lagdo Dam in Cameroun has finally reached Cross River State, where at least 49 communities in seven LGAs of the state have been flooded.

The communities are in the riverside areas of the state, according to the State Emergency Management Agency (SEMA), which gave the names of the affected LGAs as Yala, Ogoja, Ikom, Obubra, Abi, Biase and Odukpani.

Director-General, Cross River SEMA, Vincent Aquah, who assessed the extent of flooding and its accompanying damages, told journalists that the 49 communities are currently endangered and could face more intensive flooding as the release of water from the Lagdo Dam in Cameroon swells rivers.

“The communities are experiencing unprecedented flooding which have submerged thousands of farms such as yams, cassava, vegetable cocoyam, melons and other cash crops worth millions of naira.

“Hundreds of houses are inundated with the flood while over 10,000 livestock have been affected,” the SEMA boss said.

Aquah expressed fears that the magnitude and severity of damage to lives and property would increase as the level of flood rises.

He expressed fears that the concomitant effect of the flooding could be extreme famine that would visit the agrarian communities as a result of the destruction of their farms by the flood.

He said so many people would be displaced from their homes as many people and families are already relocating to make-shift shelters.

“As you can see, these conditions are far below human standard particularly living in a slum such as this thatch house. Children and women are suffering and there is an urgent need to address the situation before it gets out of hand,” Aquah said.

He appealed to the Federal Government and international organisations to come to the aid of the state government as it apparently has no financial capacity to effectively manage the situation alone.

Aquah said SEMA had, immediately after the warning of the possible release of water from Lagdo Dam by Cameroun, embarked on sensitisation campaign in all the communities along the coastline being affected by the flood.

He said the people living in the areas prone to flooding as a result of the release of water from the dam have been advised to relocate to highland areas as an immediate safety measure against the loss of human lives as well as domestic animals.

Meanwhile, the Federal Government has constituted a five-man technical committee to assess and determine the extent of damage caused by recent flooding occurrences in some states of the federation, particularly, Plateau, Jigawa, Adamawa, Benue and Kogi states.