Ways to adapt to the negative impact of climate change took a new dimension this week as stakeholders initiated moves to tackle an apparent limitation of data in the sector.

Just like other African nations, Nigeria lacks elaborate, comprehensive and real time climate figures that will enable her make appropriate decisions, predictions and preparations towards the looming negative impacts of climate change. 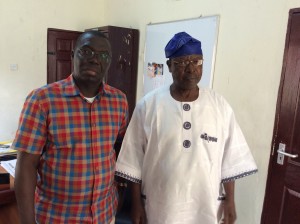 But a collaboration involving the United Nations Development Programme (UNDP) and the Federal Ministry of Environment (FME) has stepped up moves to make a change, courtesy of a capacity building programme aimed at the establishment and use of e-infrastructure for climate change data and information management in the country.

Holding at West Africa Science Service Centre and Adaptive Land-use (WASCAL) Centre in the Federal University of Technology (FUT) in Akure, Ondo State, the event commenced on Monday and will be rounded up on Friday.

In collaboration with UNDP, the Department a couple of years ago initiated a process of establishing Climate Change Data Management System under the Japanese government-sponsored African Adaptation Programme (AAP).

According to Environment Minister, Laurentia L. Mallam, the training is aimed at not only setting up the climate data server but also to enhance capacity of the Designated Government focal point as well as other climate change experts in climate change information management for decision-making process towards policy formulation and implementation.

She added that the training workshop therefore is expected to ensure that the entire High Performance Computing (HPC) infrastructure are installed  and the staff of the Department of Climate Change together with those at the FUT Akure nodal centre trained on data server administration and use of the infrastructure for climate change and related studies.

Mallam, represented by Dr Samuel Adejuwon, Director of the Climate Change Department in the ministry, emphasised that the training is in appreciation of the fact that evidences related to climate change deal mainly with spatial and non-spatial data which are more easily captured using geo-informatics and which has made it a lot easier to utilise such data for policy formulation.

“Geo-informatics for climate change studies is the art of using infrastructures including mainly satellite, servers, computers and other hardware and software applications and technology for investigating, monitoring, documenting, and understanding the impacts of climate change especially for a more informed decision taking,” Adejuwon stated.

He added: “The increasing ability to understand complex, system-oriented phenomena such as climate change is strictly correlated with the need for increasing data and computing resources. The e-infrastructures represent an innovative and unique approach to address this problem. They demonstrated to be an efficient way to share and access resources of different types which can effectively enhance the potential of scientific research and productivity.”

He lauded the UNDP for making the workshop a reality, even as he poured encomiums on the FUTA Vice Chancellor, Prof Adebiyi Daramola, and the Director of WASCAL Centre, Prof Jerome Omotosho, for hosting the German-funded international centre and making it a “Centre of Excellence.”

Also congratulating Profs Daramola and Omotosho, a representative of the UNDP at the event described WASCAL as a large-scale research-focused programme designed to help tackle climate challenge and thereby enhance the resilience of human and environmental systems to climate change and increased variability.

“It does so by strengthening the research infrastructure and capacity in West Africa related to climate change and by pooling the expertise of 10 West African countries and Germany,” he stated, adding:

“Climate change is an issue that concerns everyone on the surface of the planet – we share one atmosphere, and we truly hold a shared responsibility for reducing the greenhouse gas emissions that contribute to climate change, and supporting efforts to help vulnerable communities adapt to, and build resilience to, the effects of climate change.

“There is a need for us at this time to take steps in tackling this problem before it gets out of hand. We need to be able to take decisions, and to make plans if we are to leave something for the next generation.”

Omotosho noted that the research and training at the centre could be harnessed for national development in agriculture, climate change, rainfall disparities and in many other areas. He stated that the programme also impacts on villages in the hinterland.

However, the director stressed that the support of the German donors of the centre is time-bound and added that it is critical for the Federal Government and other interested stakeholders to show interest in the funding of the activities of the programme in the post-German era. He said the donors have requested the governments of the 10 benefitting West African countries to start making a progressive contribution of 10 per cent so that, in the event of withdrawal, the centre can be sustained.

But he lamented that government had not delivered on that contribution. The director stressed that, as an essentially manpower trainer, the importance of the centre to the development of the country could not be over-emphasised. He appealed to the government not to allow the centre die in the event that the funders withdraw eventually.

He commended the UNDP for the donation of the e-infrastructure which he said would significantly boost research and scholarship at the centre.

Climate Change Consultant to the UNDP, Dr. Joseph Intsiful, who was the lead trainer, underlined the importance of data towards mitigating climate change impact on developing countries, saying it is necessary to engage every stakeholder in order to achieve result in containing the effects of climate change.

Intsiful stressed that since the phenomenon is a global problem, to resolve its effects, there is the need to seek global perspectives, hence the training. He noted that he was impressed with the participants’ appreciation of the e-infrastructure, which they would use to stave off likely disaster areas.

He admitted that finance remains a critical issue in sustainability. Nonetheless, he advised that the idea of a centre like WASCAL should be extended to other universities in the country. He added that the ministry and UNDP should synergise to continue the training in other institutions, especially as it relates to the e-infrastructure.

Some of the trainees said they have learnt new skills which would help them in their work. Dean of School of Sciences, FUTA, Prof. Ibiyinka Fuwape, said the e-infrastructure would be beneficial to both students and researchers alike. She added that the software given to them could be deployed to various research areas for the benefit of Nigerians.

Also speaking, the duo of Bello Sani Yankuzo and Chukwuemeka Okebugwu, both staff of the environment ministry, hailed the exercise which they said would greatly advance their work. Yankuzo added that the new skills gained would help them in many areas of their work.