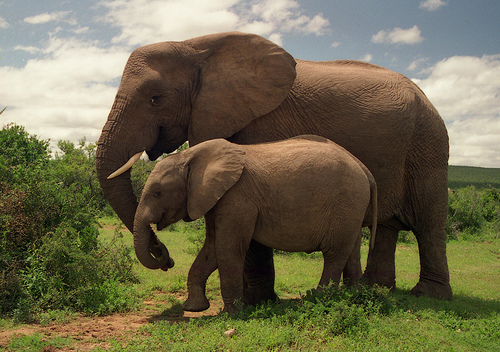 Zakari Yau was arrested in possession of a pair of elephant tusk. Photo credit: planetsave.com

The Conservator-General, who said this in an interview with News Agency of Nigeria (NAN) in Abuja, gave the trafficker’s name as Zakari Yau.

Goni said that Yau was arrested at a spot near the Nigeria-Cameroon border.

He said that the service rangers had embarked on aggressive patrols of parks, with the aid of the military and other agencies, to check illegal activities in all the national parks.

“The exercise led to the arrest of Zakari Yau from Cameroon, who was in possession of a pair of elephant tusk, contrary to the Convention on International Trade in Endangered Species of wild Fauna and Flora Act (CITES).

“The suspect had since been handed over to the National Environmental Standards and Regulations Enforcement Agency (NESREA) for further investigation and prosecution,” he said.

NAN recalls that the NPS said that it had arrested 325 wildlife offenders at seven parks across the country in the first half of 2017.

Goni said that the offenders had since been taken to court, adding that some of them were fined, while compensations were paid to the NPS.

The conservator-general, however, said that in the first half of 2017, more than 5,356 tourists visited national parks across the country.

“The service is making frantic efforts to improve and maintain international global standards and services; we want to give our parks a facelift to attract more tourists, both local and international,” he said.

“To this end, the park service is making efforts to put in place operational management plans for each park and a systems plan for the entire country.

“We want a national park system that meets the hopes and aspirations of Nigerians, and indeed the whole world, in preserving and protecting our natural heritage and the cultural relics that enliven them for generations to come.’’

Besides, Goni said that 1,986 students, who were on industrial attachment, were trained in national parks across the country.

“The national parks are not only for revenue generation but they are also for research and training,’’ he said.

He thanked the Federal Ministry of Environment, the media, military and paramilitary agencies for their support for the service.