The Federal Executive Council (FEC) in 2014 approved the sum of N9.2 billion to procure some 750,000 clean cookstoves and 18,000 wonderbags, specifically to check the impact of smoke generated when cooking with wood on human health, as well as discourage poor environmental practices like tree felling and other forms of forest degradation in Nigeria. Environment writer, Etta Michael Bisong, evaluates the concept of this programme and its impact in resolving the nation’s huge environmental challenges.

The discovery that people die as a result of smoke produced from wood during cooking has increasingly challenged the need for cleaner energy technologies. Over 93,500 Nigerians, according to the World Health Organisation (WHO), die annually due to the impact of this orthodox energy source. And that is not the end of this sad story. The sustainable development deficit in the country is best reflected in the standard of livelihood of the average Nigerian, making efforts to reduce this inimical spread impossible. Between 1970s and now, Nigeria is estimated to have lost an unprecedented amount of its total forest reserve to practices associated with this obsolete cooking method. Like the sinister aftermath of climate change, this problem seems to have taken an endless dimension. 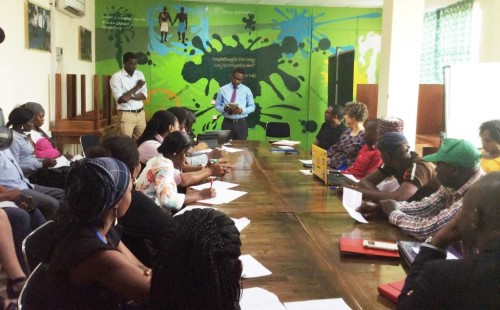 Representative of the Integral Renewable Energy, Clinton Biragbara, addressing stakeholders during the 2nd Stakeholders meeting organised by CODE on the Monitoring of the N9.2 billion National Clean Cookstoves Scheme, held recently in Abuja

In addition to this function, the clean cookstoves also reduces the quantity of wood required to produce cooking energy. Its benefits expand beyond mitigating the huge environmental challenges bedevilling Nigeria to unlocking the rigid unemployment market through various empowerment initiatives integrated into the project.

Climate change is real, although only known to those with information about these changes and their impacts on human livelihoods. The scientific terminologies largely use to encode as well as communicate these messages also contribute to the problem of slow understanding about this unseen but frightening disaster. This awareness gap clearly reflects the poor participation of citizens in the National Clean Cookstoves Scheme, as well as other related exercises such as the Great Green Wall project designed to mitigate the impact of climate change on socio-economic growth of the nation. It’s also responsible for the diverse opinions and public outcry that clouded the initiative immediately the government unveiled the plan.

Since its approval in November last year, little or almost nothing has been done on the part of government either to educate the citizens or beneficiaries about this programme. Rather than ensuring that this exercise is genuinely executed, the government has increasingly awash the vulnerable public with lots of bureaucracies and usual bottlenecks that make simple processes difficult and worse still most times impossible. Ordinarily, it would have been expected that considering the value of this exercise and its potentials in mitigating the poor environmental practices that motivate climate change impacts on human livelihood and social growth, more should have been done mostly in the area of sensitising the people on the benefits of this programme and the need for its adoption to ensure sustainability in the process.

The disbandment of a transparency and accountability committee constituting members from the media, civil society organisations (CSOs) and other key stakeholders in the sector by the Federal Ministry of Environment quickly reinforces the government ingenuity to properly execute this programme. The removal of the Rural Women Energy Security (RUWES) from the implementation process of this scheme for non-convincing reasons, and the failure to involve actors such as the Nigerian Alliance for Clean Cookstoves, Ministry of Women Affairs as well as the National Orientation Agency further alludes to this fact. The omission of these critical partners most of which are already engaging in the manufacturing, procuring and distribution of these products clearly signifies the unseen narratives of the entire concept of the clean energy enterprise.

This situation, according to the Chief Executive of Connected Development (CODE), Hamzat Lawal, is unnecessary and could as well have been avoided only if the government had consulted widely before embarking on this robust exercise.

Lawal, who made the statement at the second stakeholders meeting on the Monitoring of the N9.2 billion clean cookstoves programme organised by CODE and the Heinrich Boell Foundation in Abuja, hinted that he visited the Environment Ministry countless times yet never received any positive feedback. Not even the letter his organisation wrote under the cover of the Freedom of Information Act (FoIA) yielded results, as the Director of Finance was conservative with information about the project implementation simply on the basis that no such letter has gotten to or instructed him to release such information.

Participants at the workshop expressed concern about the haphazard nature with which the project is handled. This project as against its original plan has continued to suffer inconsistencies both in the release of the funds meant for implementation to the distribution of the anticipated products to the beneficiaries. Other issues that they believe should be addressed have to do with differentiating between who gets the clean cookstoves for free, as well as the uncertainty about the actual amount of money released to mobilise Integral Renewable Energy (IRE), the contractor handling the project. These worrisome situations have raised two critical questions – market sustainability of the clean cookstoves and government’s readiness to be transparent in the delivery of these products.

Although, at the workshop it was clarified that the distribution of the stoves to the end users was no longer going to be carried out as earlier projected by the wives of states governors or their colleagues at local government level due to various reasons raised at the meeting, mostly the issue of transparency. Religious bodies and community-based women NGOs are now expected to facilitate the exercise after the government succumbed to lots of pressure from both stakeholders and other rights groups in the country.

On the actual funds released so far, a representative of IRE, Clinton Biragbara, disclosed that his organisation had only received 15% of the total project money which is estimated at about N1.3 billion. This revelation contradicts an earlier public perception that N5 billion of the total money had been released to mobilise the contractor. Although, the hint about the release of the N5 billion the contractor is coming from a reliable but authorised source in the government. These contractions about the actual figure to believe have really added to earlier apprehensions raised by stakeholders about the successful implementation of this project.

Against this background, the stakeholders called on the Ministry of Environment, whose representative was absent at the meeting, to make public the utilisation of the clean cookstoves funds as it is public money and government is meant to ensure available information on how its utilised. They also demanded that the governments consult widely for the implementation of the National Clean Cookstove Scheme and institutionalise a publicly known mechanism for dissemination of the cookstoves, while making transparent the identities of beneficiaries of the stoves.