After initially paying 6 million Euros, France has pledged another 2 billion Euros in support of the Africa Renewable Energy Initiative (AREI), which seeks to scale-up and harness the continent’s huge potential in renewable energy sources. 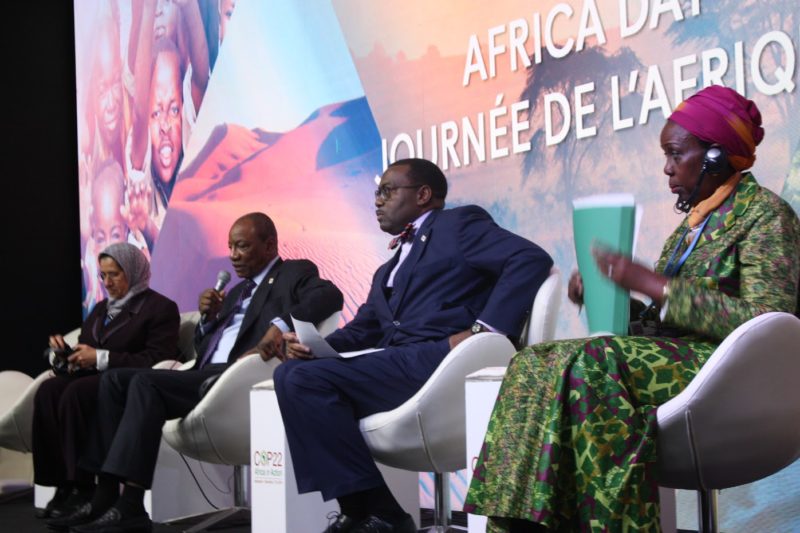 President, African Development Bank ( AfDB), Akinwumi Adesina, who announced this on Wednesday, November 16, 2016 during the Africa Day events at the ongoing UN climate talks (COP22) holding in Marrakech, Morocco, also said that, within this week, Germany committed some 2 million Euros to the project.

The Africa Renewable Energy Initiative, which was launched at COP21 in Paris in December 2015, seeks to achieve at least 10 Giga Watts of new and additional renewable energy generation capacity by 2020, and at least 300 Giga watts by 2030.

Adesina who said the commitments by France and Germany are an indication that that the COP22 is an action COP, said that, to fully realise the objective of sustainably providing power in Africa, new financial commitments are needed.

“Yesterday, President of France, saluted the great effort of the African Development Bank in moving the initiative forward.  And then he announced that France would provide 2 billion Euros for the initiative. Germany has also committed to provide 2 million Euros in support of the Delivery Unit.

“I am also delighted that the EU will strongly support this initiative. I will hear from the European Union Commissioner later. So ladies and gentlemen, this is clearly becoming a COP of Action. I am looking forward to the fulfilment of the full pledge by G7 to provide $10 billion to this initiative,” Adesina told a full house of delegates at the African Pavilion.

The ADB President also said that, in support of the AREI, the bank has committed itself to invest 12 billion dollars to add to expected huge financial support from the private sector.

“The Africa Development Bank has committed itself to invest $12 billion over the next five years in support of accelerating electricity supply in Africa and to leverage between $45 and $50 billion from the private sector. The bank will work with the African Union and other partners to fast-track what is it that Africa wants and certainly the Africa we want is Africa that is not in the dark.

“The Africa we want must have a universal access to electricity within 10 years. And that is why the African Development Bank is delighted with and highly supportive of the Africa renewable energy Initiative. The goal of the initiative is to unlock Africa’s renewable energy initiative to deliver 10 Gigawatts of electricity by 2020 and 300 Gigawatts by 2030. The initiative was a major outcome for Africa for COP21 in Paris when G7 countries committed to provide $10 billion towards the initiative.”

Adesina, who lamented the low level of development on the African continent, said all efforts must be put in place to light up the continent because, according to him, its development will only be possible with constant and affordable power supply.

He said, “Africa cannot develop in the dark. Just take a look at how lack of electricity drags down Africa’s growth and development. For decades Africa has continued to export raw materials as it does to the subject of global commodity price shock as we are already witnessing. Then the reason why Africa exports raw unprocessed materials is simple. Africa does not have electricity. Lack of access to power has pushed Africa down to the bottom of global value chains.

“Africa must power itself to add value to what it produces, speed up industrialisation and move to the top of global value chain. This must start with unlocking the huge potentials of energy on the continent including Africa’s vast potentials in renewable energy as well as no renewable energy. Africa simply needs energy period. Potentials is important but potentials cannot light our homes or power industries. Therefore, we must act very fast. We must ensure that Africa develops a balanced energy means that will allow it to industrialise.

“Grid, many grids and off-grids systems would play a major role. We are playing our part at the African Development Bank. The bank is rapidly building up institutional capacities to deliver on the power Africa agenda for Africa. To drive this action, the bank has established the office of a new vice president for power, energy, climate and green growth making the bank the first multilateral development bank to do so. The bank is now therefore structurally set up to drive the agenda to light up and power Africa. We are now structured and fit for purpose.

“All will make progress in achieving the goal of universal access electricity and acceleration of growth of the growth of renewables in Africa energy needs. Let me close, by thanking President, President of Guinea, I thank President Iss of Egypt, all African heads of states, the Chairperson of the African Union Commission for their indefatigable support behind this initiative. Africa needs you and all its partners to deliver success on the Africa renewable energy initiative. The initiative should be fully supported with new money and we must avoid any attempt to derail the initiative through parallel financial initiative. We must come together and move in the same direction as approved by the African Union, the African Development Bank will continue to play its role as host and trustee of this initiative. Together, let us move the initiative forward. Let us turn pledges on paper into projects on the ground. Let us together deliver success for Africa. Let us together light up Africa.”

The Africa Renewable Energy Initiative is now becoming operationalised through an Independent Delivery Unit (hosted at AfDB) and the formation of formal governing structures. Pledges in the order of $10 billion are said to have been made by G7 countries, Sweden, The Netherlands and EU.