Middle East nations most likely to be water-stressed in 2040

The world’s demand for water is likely to surge in the next few decades. Rapidly growing populations will drive increased consumption by people, farms and companies. More people will move to cities, further straining supplies. An emerging middle class could clamor for more water-intensive food production and electricity generation.

But it’s not clear where all that water will come from. Climate change is expected to make some areas drier and others wetter. As precipitation extremes increase in some regions, affected communities face greater threats from droughts and floods.

While changing water supply and demand is inevitable, exactly what that change will look like around the world is far from certain. A first-of-its-kind analysis by the World Resources Institute (WRI) sheds new light on the issue.

Using an ensemble of climate models and socioeconomic scenarios, WRI scored and ranked future water stress – a measure of competition and depletion of surface water – in 167 countries by 2020, 2030, and 2040. We found that 33 countries face extremely high water stress in 2040 (see the full list). We also found that Chile, Estonia, Namibia, and Botswana could face an especially significant increase in water stress by 2040. This means that businesses, farms, and communities in these countries in particular may be more vulnerable to scarcity than they are today. 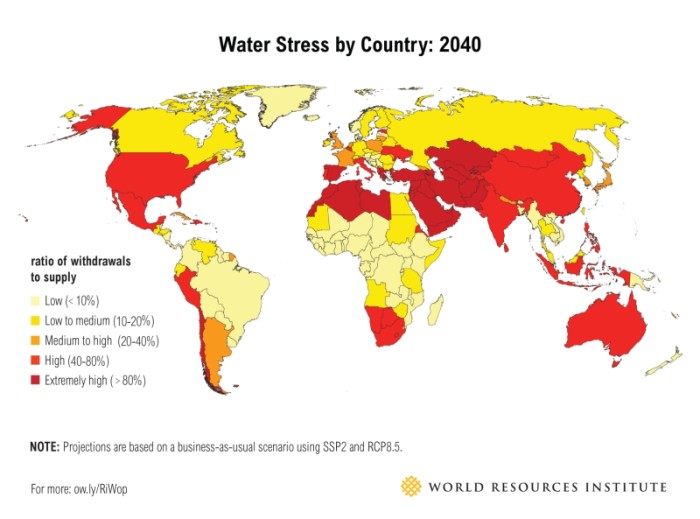 Challenging Future for a Volatile Region

Fourteen of the 33 likely most water-stressed countries in 2040 are in the Middle East, including nine considered extremely highly stressed with a score of 5.0 out of 5.0: Bahrain, Kuwait, Palestine, Qatar, United Arab Emirates, Israel, Saudi Arabia, Oman and Lebanon. The region, already arguably the least water-secure in the world, draws heavily upon groundwater and desalinated sea water, and faces exceptional water-related challenges for the foreseeable future.

The problem extends to other countries. Water is a significant dimension of the decades-old conflict between Palestine and Israel. Saudi Arabia’s government said its people will depend entirely on grain imports by 2016, a change from decades of growing all they need, due to fear of water-resource depletion. The U.S. National Intelligence Council wrote that water problems will put key North African and Middle Eastern countries at greater risk of instability and state failure and distract them from foreign policy engagements with the U.S.

While they will probably not face the extreme water stress blanketing the Middle East in 2040, global superpowers such as the United States, China and India face water risks of their own. High water stress in all three countries are projected to remain roughly constant through 2040. However, specific areas of each, such as the southwestern U.S. and China’s Ningxia province, could see water stress increase by up to 40 to 70 percent.

This pattern reflects a limitation of national-level datasets. Averaging future water stress across an entire country into a single score can disguise local-level risks, even using WRI’s weighting algorithm to count water stress where water is used the most. WRI generally recommends that most Aqueduct users operate at the tool’s standard sub-river basin level with more granular information. However, certain users, such as international commercial banks with national portfolios, depend on national indicators to assess risk, so rankings and aggregated scores are valuable.

We chose this future in consultation with leading experts because it is simplified yet useful information to help international, organisations, businesses, and financial institutions take steps to mitigate risks. This set of rankings and scores can also help users more effectively adapt to a plausible future climate change and water demand scenario.

Every water-stressed country is affected by a different combination of factors. Chile, for example, projected to move from medium water stress in 2010 to extremely high stress in 2040, is among the countries more likely to face a water supply decrease from the combined effects of rising temperatures in critical regions and shifting precipitation patterns.

Botswana and Namibia sit squarely within a region that is already vulnerable to climate change. Water supplies are limited, and risk from floods and droughts is high. Projected temperature increases in southern Africa are likely to exceed the global average, along with overall drying and increased rainfall variability. On the water demand side, according to Aqueduct projections, a 40 to 70 percent – or greater – increase is expected, further exacerbating the region’s concerns. 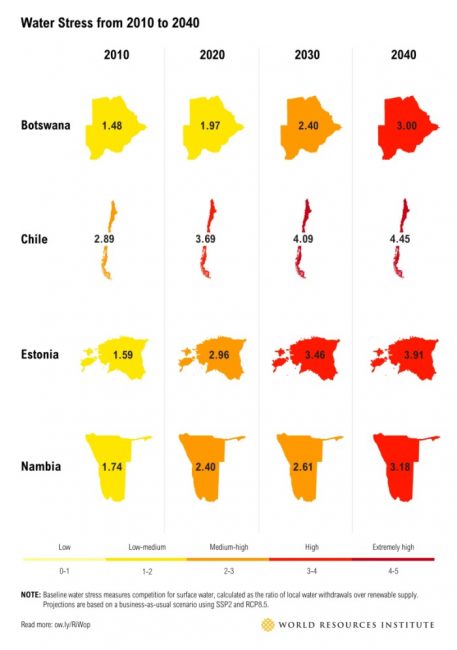 Whatever the drivers, extremely high water stress creates an environment in which companies, farms and residents are highly dependent on limited amounts of water and vulnerable to the slightest change in supply. Such situations severely threaten national water security and economic growth. National and local governments must bring forward strong national climate action plans and support a strong international climate agreement in Paris this November. Governments must also respond with management and conservation practices that will help protect essential sustainable water resources for years to come.

In spite of the state government’s warning against drinking...