Ontario has signed a joint declaration with Québec and Mexico, committing to working together to fight climate change. 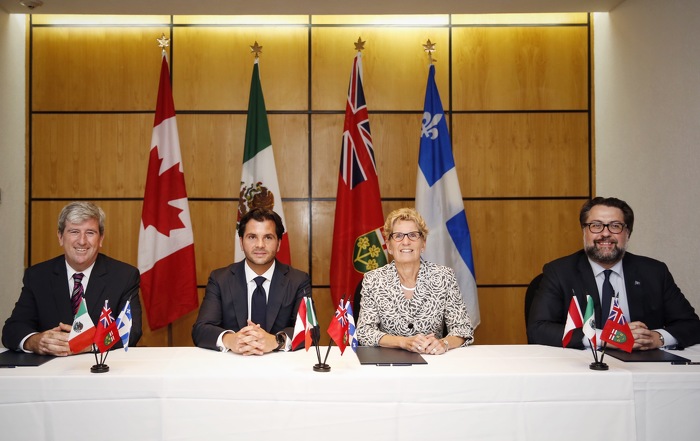 Ontario Premier Kathleen Wynne (third from left), in Guadalajara, Mexico at the 2016 Climate Summit of the Americas, met with Ontario Minister of the Environment and Climate Change Glen Murray (left), Secretary of Environment and Natural Resources of Mexico Rafael Pacchiano Alamán (second from left) and Québec Minister of Sustainable Development, Environment and the Fight against Climate Change David Heurtel (right) before they signed a new joint agreement committing Ontario, Québec and Mexico to working together to fight climate change and advance carbon markets.

Ontario signed the agreement on Wednesday during Premier Kathleen Wynne’s mission to Mexico. The agreement will drive progress on the common commitment to pricing carbon.

All parties are in Guadalajara, Mexico for the 2016 Climate Summit of the Americas.

Fighting climate change is part of the government’s economic plan to build Ontario up and deliver on its number-one priority to grow the economy and create jobs. The four-part plan includes helping more people get and create the jobs of the future by expanding access to high-quality college and university education. The plan is making the largest infrastructure investment in hospitals, schools, roads, bridges and transit in Ontario’s history and is investing in a low-carbon economy driven by innovative, high-growth, export-oriented businesses. The plan is also helping working Ontarians achieve a more secure retirement.

Kathleen Wynne, Premier of Ontario, said: “To effectively fight climate change, we must work together on a global scale. Mexico, Ontario and Québec are driving real progress on reducing harmful greenhouse gas emissions. This milestone declaration will boost cooperation between our three regions and drive the reduction of carbon emissions across North America. I look forward to working together on common goals including advancing carbon markets and cap and trade programs across North America.”

Glen R. Murray, Ontario Minister of the Environment and Climate Change, stated: “Today, Ontario, Québec and Mexico took a major step forward together to change our world for the better. This new agreement reinforces cap and trade’s vital role in fighting climate change. Like Mexico, regions around the world are recognizing that adopting a market-based approach to pricing carbon is a proven way to reduce greenhouse gas pollution while encouraging a stronger, more sustainable economy. Our province is proud to stand shoulder to shoulder with other leaders committed to ensuring our future generations inherit a healthier planet.”