Measles: Nigeria has world’s highest number of unvaccinated children – WHO

October 27, 2017 Comments Off on Measles: Nigeria has world’s highest number of unvaccinated children – WHO 798 Views

Out of the total 20.8 million children worldwide who have missed their first measles vaccine dose, 3.3 million are from Nigeria – the highest globally. 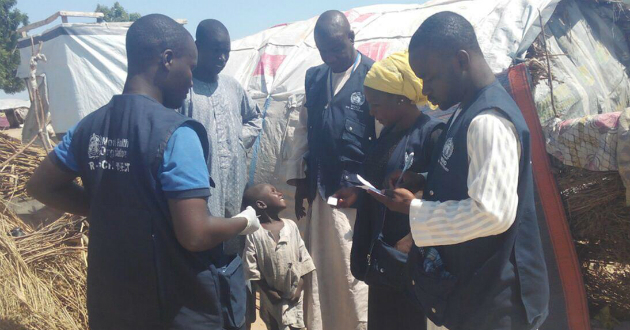 The revelation was made on Thursday, October 26, 2017 by the World Health Organisation (WHO) against the backdrop of the release of a report that stated that, in 2016, an estimated 90,000 people died from measles, a figure that represents an 84% drop from more than 550,000 deaths in 2,000. This is said to be the first time global measles deaths have fallen below 100,000 per year.

The UN body is bothered by the fact that far too many children – 20.8 million – are still missing their first measles vaccine dose, and that more than half of these unvaccinated children live in six countries: Nigeria (3.3 million), India (2.9 million), Pakistan (2.0 million), Indonesia (1.2 million), Ethiopia (0.9 million), and Democratic Republic of the Congo (0.7 million).

“Since measles is a highly contagious viral disease, large outbreaks continue to occur in these and other countries in Europe and North America, putting children at risk of severe health complications such as pneumonia, diarrhoea, encephalitis, blindness, and death,” the WHO disclosed in a statement.

Dr Robert Linkins of the Measles and Rubella Initiative (MR&I) and Branch Chief of Accelerated Disease Control and Vaccine Preventable Diseases at the Centres for Disease Control and Prevention says: “Saving an average of 1.3 million lives per year through measles vaccine is an incredible achievement and makes a world free of measles seem possible, even probable, in our lifetime.”

The M&RI is a partnership formed in 2001 of the American Red Cross, the US Centres for Disease Control and Prevention, the United Nations Foundation, United Nations Children’s Fund (UNICEF), and WHO.

ALSO READ:  Over 600 confirmed cases of COVID-19 in Africa

Since 2000, an estimated 5.5 billion doses of measles-containing vaccines have been provided to children through routine immunisation services and mass vaccination campaigns, saving an estimated 20.4 million lives.

“We have seen a substantial drop in measles deaths for more than two decades, but now we must strive to reach zero measles cases,” says Dr Jean-Marie Okwo-Bele, Director of WHO’s Department of Immunisation, Vaccines and Biologicals. “Measles elimination will only be reached if measles vaccines reach every child, everywhere.”

The world is still far from reaching regional measles elimination goals. Coverage with the first of two required doses of measles vaccine has stalled at approximately 85% since 2009, far short of the 95% coverage needed to stop measles infections, and coverage with the second dose, despite recent increases, was only 64% in 2016.

Agencies noted that progress in reaching measles elimination could be reversed when polio-funded resources supporting routine immunisation services, measles and rubella vaccination campaigns, and surveillance, diminish and disappear following polio eradication. Countries with the greatest number of measles deaths rely most heavily on polio-funded resources and are at highest risk of reversing progress after polio eradication is achieved.

ALSO READ:  WHO embarks on yellow fever vaccination in Borno

“This remarkable drop in measles deaths is the culmination of years of hard work by health workers, governments, and development agencies to vaccinate millions of children in the world’s poorest countries,” said Dr Seth Berkley, CEO of Gavi, the Vaccine Alliance, one of the world’s largest supporters of measles immunisation programmes. “However we cannot afford to be complacent. Too many children are still missing out on lifesaving vaccines. To reach these children and set ourselves on a realistic road to measles elimination we need to dramatically improve routine immunisation backed by strong health systems.”