United Nations Secretary-General Ban Ki-moon on Sunday urged Mayors across the world to “take strong ownership” of a new global agenda for sustainable development in the towns and cities they represent. 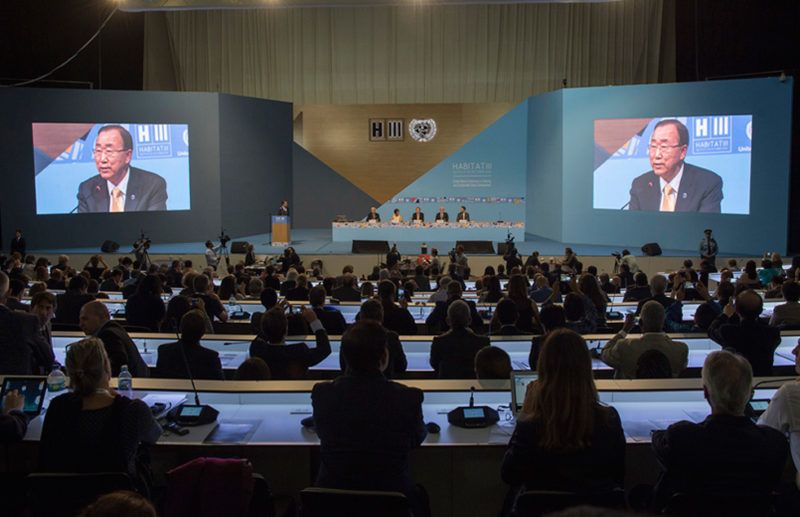 Speaking to a gathering of some 400 mayors, representatives of local authorities and urban partner organisations, Mr. Ban made this call in the Ecuadorian capital, Quito, on the eve of the official opening of the UN Conference on Housing and Sustainable Urban Development, known by the shorthand Habitat III, which aims to re-think the planning and management of towns and cities across the world, through the adoption a the New Urban Agenda.

The Agenda, an action-oriented framework which will set global standards for achievement in sustainable urban development, should be prioritised alongside implementing the 2030 Agenda for Sustainable Development, and its 17 Global Goals, or SDGs, agreed by 193 UN Member States just over a year ago in New York, added the Secretary-General.

He pointed Goal 11, which “pledges to make human settlements inclusive, safe, resilient and sustainable.” And in that regard, “elected officials, Mayors, Governors and Councillors, are the forefront of the battle for sustainable development,” he said, to a loud applause from delegates to the Second World Assembly of Local and Regional Governments, also known as the World Mayors Assembly.

“In short, your role is growing by the year (…) You are faced with the immediate daily demands of your people: for housing, transport, infrastructure, and basic services.”

The Habitat III conference has been 20 years in the making; the third global summit of its kind, dedicated to housing and sustainable urban development.

By hosting the conference, Quito becomes the first city in the “Global South” to take on the role, and thousands have gathered to the picturesque capital, which straddles the equator. The city, with its historic and picturesque centre, was declared a World Heritage Site by the UN Educational and Scientific Organisation (UNESCO) in 1978.

Mayors and the New Urban Agenda

Urban development is seen as an increasingly important priority for the United Nations, as the world urban population is set to nearly double by 2050.

Mr. Ban praised the invaluable role played by mayors and other local government leaders, in devising the New Urban Agenda.

Although national governments must play a strong role in devising legislation and policies to make cities grow sustainably in the future, it was local and regional leaders who would have to “implement these visions on the ground.”

Indeed, he said: “(You) must make the tough decisions on which issues to prioritise – because you have to manage budgets and balance sheets. You are accountable to national governments, and in many cases, to your local voters too (…). Your inputs into the New Urban Agenda were invaluable.”

The development Goals and also the commitment to curb carbon emissions made through the Paris Agreement on climate change last December, would be “under your direct leadership,” he told delegates in the main hall of Quito’s Casa de la Cultura Ecuatoriana.

“Take strong ownership of this vital agenda. Stand up for the people you represent,” he added.