August 17, 2015 Comments Off on LUPAR blueprint will be ready for Ilorin conference, says NITP president 989 Views

National President of the Nigerian Institute of Town Planners (NITP), Dr Femi Olomola, has said that a draft of the Land Use Planning Report (LUPAR) will be made ready in time for the institute’s next national conference and annual general meeting coming up in October in Ilorin, Kwara State. 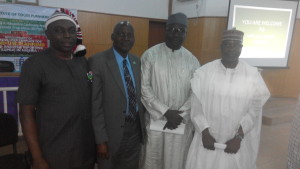 Town planners in politics: National President of the NITP, Dr. Femi Olomola (second from left), with professional members of the institute and legislators in the National Assembly ..in Kaduna

Dr Olomola, a Fellow of the NITP (FNITP), made the disclosure recently during the institute’s 17th edition of the Mandatory Continuing Professional Development Programme (MCPDP) that held in Kaduna, Kaduna State. The two-day forum had: “Development of a Multi User Template for Land Use Planning and Analysis Reporting (LUPAR) in Nigeria” as its theme.

The Kaduna MCPDP is the third and last leg of the NITP’s MCPDPs in 2015, with Port Harcourt, Rivers State (June 18th – 19th) and Ibadan, Oyo State (July 1st – 2nd) previously hosting the event. All the MCPDPs discussed the same theme.

“Be rest assured that a draft of the LUPAR will be prepared and made available in time for our next conference in Ilorin in October. All suggestions bothering comments, observations and corrections made during this MCPDP and the previous ones in Port Harcourt and Ibadan will between now and October be looked into and possibly adopted so that will have a robust LUPAR that we will present to a full house of the NITP in Ilorin,” submitted Dr Olomola while delivering a keynote address during the opening of the well-attended workshop.

While describing LUPAR as a novelty that seeks to expand the frontiers of Site Analysis Report (SAR) applications beyond the tradition of planning approvals, the NITP president submitted that the MCPDP is aimed at building consensus on the new template among the practitioners and to allow for inputs before the report will be presented in October.

Conceived by the Femi Olomola-led administration, the LUPAR will also build on the existing SAR processes and procedures, as well as adding details of geographic references and further information relating to building types and conditions, title deeds, the local land use and development setting, and the permits granted on property.

The expanded areas of its application cut across various sectors of the economy, many of which have direct relevance to the financial sector and regulatory agencies.

According to the town planners, the new format LUPAR, in addition to other benefits, can become a very useful and authentic instrument that supports applications for opening of corporate bank accounts, process bank loans, make requests for Insurance cover, and incorporate/register new companies with the Corporate Affairs Commission (CAC).

Besides, it will also address the traditional requirements of applications for building plan approval/permits, issuance of certificates of occupancies (C-of-Os), and potential value to security and regulatory agencies with oversight functions on crime and enforcement of standards, among others.

“With LUPAR, it is hoped that 95% of all problems related to lack of data, inadequate personnel and stress on development control will be significantly addressed. This shall lead to situations where our colleagues in government can now rely on LUPAR as a companion in their decision making processes. A combination of two or three LUPARs in the same neighbourhood will, if carefully joined together, provide an updated base map of the neighbourhood at zero cost to the Town Planning Authority,” said Dr Olomola.

While expressing satisfaction at the turnout of members at the MCPDP, Chairman of the Kaduna State Chapter of the NITP, Muhammad Lawal Ubale, disclosed that Kaduna has been fortunate since its inception in having plans for its development.

“Finally, Kaduna became capital of the present Kaduna State from 1989 to date. The experience of Kaduna as a regional capital and the role it is playing in Northern Nigeria and Nigeria in general cannot be overemphasised.”