Laurentia Mallam: How Paris 2015 agreement can be a reality

Nigeria’s Minister of Environment, Mrs. Laurentia Laraba Mallam, who addressed the High Level Panel of the 20th Session of the Conference of the Parties (COP 20) to the United Nations Framework Convention on Climate Change (UNFCCC) in Lima, Peru on Thursday December 11, 2014 insists that the Lima forum must craft a decision leading towards a universal agreement next year December. According to her, Nigeria will not be part of any agreement that would strangulate her economy 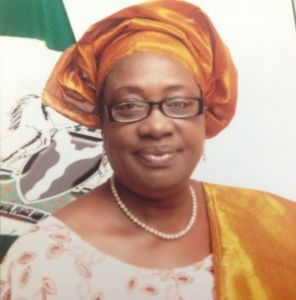 Nigeria is witnessing the adverse effects of climate change in all its ramifications. Presently, Nigerians are reeling under the impacts of climate change as the frequency and intensity of extreme events like floods, rainfall and drought have increased. The challenges of climate change in Nigeria have brought about the destruction of many economic and non-economic institutions; and more aggressively threatening the country’s food security.

The magnitude of insurgency currently being expressed in the country cannot be completely explained away without taking cognisance of climate change. Climate change is therefore threatening not only the sustainable development of our socio-economic activities but also to the totality of human existence in our country and also in other parts of the world.

We recognise that the last three COPs (from Durban to Warsaw) have witnessed discussions towards evolving a new climate regime. In particular, in Warsaw, the COP adopted ADP decision on domestic preparations of Intended Nationally Determined Contributions (INDCs), and resolves to accelerate the full implementation of the Doha Amendment. My delegation is very worried at the pace of our work up to and currently in Lima and we have also expressed our worries anytime the opportunity abounds in the climate change process.

The issue of INDC was a decision adopted by the COP 19 in place of emission reduction commitments to be undertaken by the developed country Parties. Because of its newness and apparent complexity, our technical experts are still grappling with the concept, despite the necessity to submit INDCs by March 2015. Nigeria urges that the process should be fully elaborated and financial support provided to developing countries to prepare their INDCs. This will help their pursuit of climate compatible sustainable development given their national circumstances and priorities.

Without clear understanding of the INDC concept, and without evidence of submission by the developed country Parties of ambitious scale of emission reduction targets in their INDCs, my country will not be part of any agreement that would strangulate its economy, limits our development efforts and renders our lives worse off in whatever form.

Concerning the Doha Amendment, evidence at hand also indicates limited progress. As at 24 November 2014, only 18 Countries have ratified the Doha Amendment. It may also interest Your Excellences that, out of this 18, only two are from the developed country Parties. This raises a serious concern about the commitment of our developed country partners to achieving a global climate regime that will ensure global stability and sustainable development.

The Emission Gap Report 2014 produced by UNEP is based on contributions from 38 lead scientists from 22 research groups in 14 countries. The Intergovernmental Panel on Climate Change (IPCC) in all its Reports, has consistently indicated what we need to do in respect to emission reduction to have a safer future. All these Reports seem to be asking the same and key question – whether the pledges made by countries are on track to meet the so-called two-degree target. My delegation wishes rto eiterate here that mitigation is the bedrock of any agreement being negotiated to mitigate climate change. This is why major economies must scale up, in an ambitious manner, the level of greenhouse gas emission reduction targets.

Series of mechanisms to achieve substantial emission reduction level abound. My delegation noted with concerns that the operationalisation of the New Market Mechanism still remains unclear. Much time has been lost in elaborating Reducing Emission from Deforestation and Forest Degradation (REDD+) mechanism. The future of CDM in the Second Commitment still looks bleak going by the fact that big economies are yet to ratify the Doha Amendment. In particular, we are worried that this new market mechanism may be an indirect replacement of the CDM that will put Africa at a disadvantage.

It is imperative for this body to ensure that the interest of African country Parties is not compromised in the new market mechanisms.

Nigeria is firmly committed to seeing that current areas of contentions with respect to the financial mechanism, adaptation framework and institutional arrangements, technology transfer and capacity building are resolved to the benefit of all Parties.

Various institutional arrangements abound in the climate change process. We have the Special Climate Change Fund, Least Developed Country Fund, Adaptation Fund and now the Green Climate Fund. The issue here is how much is available in all these Funds and how accessible they are to the developing country Parties in general and Africa Region in particular.

Nigeria calls for urgent implementation of all the commitments and actions towards reducing the levels of emission both under the Convention and its Protocol through enhanced level of ambition with respect to emission reduction targets. Lima must craft a decision towards a universal agreement in December 2015, which will enter into force in 2020.

Finally, my delegation would like to reiterate that the outcome of Lima in two or three days’ time will make or mar Paris. To make Paris 2015 potentially realistic for the climate change process, significant decisions have to be taken here in Lima.

Lima must have an outcome decisions that will evolve into legally-binding in nature, which reinforces a fair, multilateral and rules-based regime guided by science; that brings into effect the right to equitable access of every country of the world to sustainable development, the sharing of atmospheric space and resources with the principle of equity reflected in all aspects of the elements in its contents. Otherwise, we will all be gathering ceremonially every year in the name of the Conference of Parties, ever rhetoric in discussion, while the timed bomb is ticking away. The world is waiting for our collective action and the time to act is now.