Why Lagos should not privatise water, by ERA/FoEN

Deputy Director, Environmental Rights Action/Friends of the Earth Nigeria (ERA/FoEN), Akinbode Oluwafemi, at a media briefing in Lagos, lists reasons why the Lagos State Government should publicly oppose the PPP water privatisation scheme it is believed to be pursuing 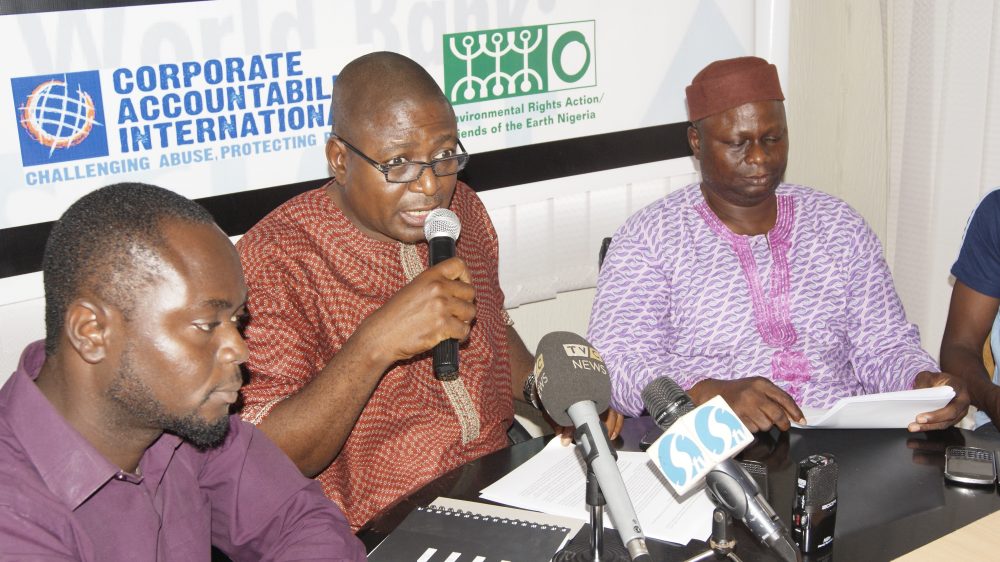 When we started this campaign to stop the Lagos water privatisation in October 2014, the immediate past administration in the state maintained sealed lips, refusing to disclose any detail to the public. The initiative was shrouded in utter secrecy, with virtually no information in the public domain.

But intense local and international demands for disclosure by the Our Water, Our Right Coalition comprising civil society, labour and grassroots organisations forced the bank to open up on the water privatisation scheme, which centres on the appointment of its private arm — the International Finance Corporation (IFC) to design a PPP water scheme for Lagos. Our as a group, supported by our allies across the world forced the bank to open up, including announcing the cancellation of its pact with the Lagos state government. Until that announcement, the Group Managing Director of Lagos State Water Corporation (LSWC), Shayo Holloway – an avowed advocate of water privatisation, had shunned demands to speak on the issue.

Holloway also refused to comment on a recently-released report that showed that the PPP water privatisation model he was promoting on the platform of the LSWC was a failure in many countries.

The model failed in Nagpur in India, Manila in the Philippines and has been rejected in Paris where the Veolia which the IFC had a stake in, was forced to divest from managing public water assets.

We have said it time and again that, through its investment in and promotion of PPP, the World Bank encourages privatisers to take over and profit from public water systems. In the countries where the PPP has been experimented, people struggle with skyrocketing rates and poor water quality, along with erratic supply. The PPPs have not only failed to deliver on commitments to expand infrastructure, but focus solely on increasing profit margins. The failures in countries that experimented the PPP model has spurred a global demand for “remunicipalisation”.

The profit mantra, far above service delivery, was the echo of the former helmsman of the LSWC until he was forced to resign in October 2015 following a query from the Head of Service on the parlous state of infrastructure at the corporation.

Having followed developments since the 29 May 2015 assumption of office of the incumbent governor, Mr. Akinwunmi Ambode, we have made the following observations:

As much as we commend the Governor Ambode administration for shining its torch on the rot in the LSWC which led to the resignation of Holloway, we are not satisfied with the silence of the state government on our demand for a probe of the management of the corporation in the last 16 years.

For us, Holloway’s resignation is a tacit acknowledgement of the failure of his tenure and especially his management team. His resignation does not however answer for the poor performance of LSWC in delivering water to the people nor the grievances of staff of the corporation who have been sidelined in decision-making and initiatives that would have made the agency work better. We anticipate that the Ambode administration get to the root of the causes of the decay at the corporation.

The water scarcity witnessed across Lagos earlier this month is indicative of something deeper than meets the eye. The state government may have explained that the shortage was due to non-availability of chemicals but we are convinced that, if water is given the priority it deserves, what happened will not have occurred. We hold strongly that the Lagos State government can do a lot to address the infrastructural challenges bedeviling the state’s water sector with adequate allocation of funds from its growing yearly GDP.

For those who were born in Lagos or those who have lived here before the last two decades, Lagos boasted an attractive socio-economic infrastructure, which included the availability of potable water and good health infrastructures. What we have witnessed in the last two decades culminating in last week’s unavailability of chemicals to purify water is a backflip compared with the situation in previous decades.

These questions can be answered from another direction. Statistics show that while the allocation to water has remained stagnant, the state’s GDP has continued to grow. As at 2010 the GDP of Lagos stood at $80 billion, making it the 11th largest African economy. Lagos generated over 75% of its revenues from sources other than federal grants derived from oil revenues.

While we hail Holloways ouster, we strongly feel the new Lagos water utility head, Mr. Mumuni Badmus, is in a hurry to take up the same failed plan of the former helmsman and this would not only mean disaster for the people of Lagos, but a huge political mistake. Our preliminary observation is that the new managing director is on the same slippery road of PPP which is hinged on polarising the workers union with promises of good offers with the commencement of water privatisation. Labour is however not fooled as privatisation of the power sector has taught them a good lesson in trusting privatisers. We reiterate that the only way to engage is to do it with full transparency, disclosure of current plans, and accountability by incorporating input through the proper channels from independent civil society and labor organisations. That is how together we will arrive at a solution to our water problems.

We reiterate our belief that the people and workers of Lagos deserve nothing but a strong public water system that upholds universal water access as a basic human right. That is why we elect our government leaders. We are ready to work with the government to achieve that goal, and the first step is ruling out any form of water privatisation.

The plans of former Group Managing Director of LSWC, Shayo Holloway, for a water PPP hit the rocks because people know privatisation when they see it. The new managing director should be reminded of this.

Contrary to the impression that civil society and union partnership is intended to cripple the state government, the Our Water, Our Right Coalition which we formed early this year is not the adversary of the Lagos government. On the contrary, we are ready to help this administration and our water managers build a water system that provides access to Lagos residents. That model we are proposing is not in the realm of water privatisation.

The parlous state of infrastructure which was the basis of Holloway’s ouster is testament to failure in management of the water works in Lagos, and not basis of the PPP. We should call the bad managers of the LSWC to account for all the monies allocated to the corporation that were either not used, or outrightly misappropriated.

While we appreciate Governor Ambode’s explanation that the infrastructure at the waterworks are in a very bad shape, his argument reinforces our conviction that the problem with water access in Lagos is not lack of resources, but rather mismanagement and lack of accountability to people. The solution is not profit-driven privatisation through a PPP — it is strong democratically accountable management and pro-people public investment.

In order to move Lagos toward the path of universal water access, we ask Governor Ambode to convene a meeting with the Our Water Our Right Coalition to discuss collaborating to meet our mutual goals.

We also use this medium to re-echo our earlier demands that the Lagos State government:

We also ask the governor to publicly oppose the PPP water privatisation scheme currently being pursued in Lagos, and instead propose a comprehensive plan for achieving universal access to clean water in the state.