In a bid to restore cleanliness to housing estates and other parts of the state, the Lagos Environmental Sanitation Corps (LAGESC) has reiterated its readiness to promote hygienic environment.

This restoration, according to the Corps Marshal of the agency, CP Gbemisola Akinpelu (retd), in a statement issued on Wednesday, October 7, 2020, will be through constant monitoring of environmental infractions and untidy surroundings.

“The present administration of Mr Babajide Sanwo-Olu is poised to ensuring healthy and cleaner environment.

“As such, the agency will continue to ensure necessary compliance and enforcement of all environmental laws across the nooks and crannies of the state,” she said.

“In the same vein, a block of flats at Falowo bus-stop, Jakande Estate, Ejigbo, has also been served with notices on related environmental infractions to restore sanity,” she said.

Akinpelu said that the agency had also carried out operational activities around Olaolu street and Igbeyin Adun street in Oshodi/Isolo Local Government area for other environmental contraventions.

ALSO READ:  Espinosa to Potsdam climate scientists: ‘We need you’

“Four numbers of a building complex, including a hotel around Egbeda-Akonwonjo area of the state, have also been issued with abatement notices.

“This was on account of erecting permanent slabs on public drains, with no provision for ease of desilting, a development causing disruption of free flow of water, resulting in flooding,” she said.

The retired police commissioner, however, averred that the exercise would be continuous and sustained in gated estates and other areas of the state.

She stressed that all environmental infractions would not be tolerated and anyone caught violating the environmental laws would be punished accordingly.

She admonished the people of the state to adhere to the directives issued by the Ministry of Environment and Water Resources.

According to her, all residents owe the state a duty to support the Sanwo-Olu-led administration’s efforts at ensuring that heavy rainfall did not wreak havoc in the state. 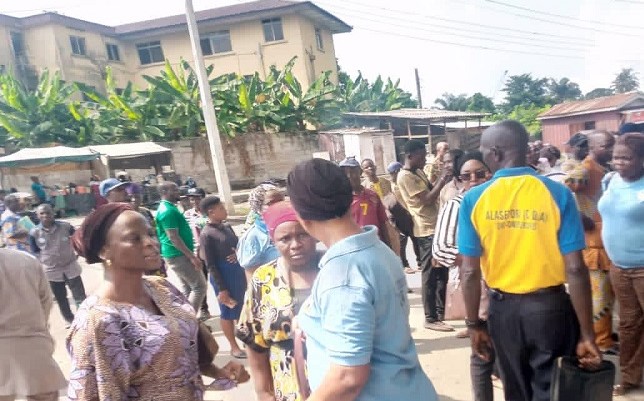 Workers of the Lagos State Water Corporation are up against the organisation’s management in Ijora ...