A fledgling but promising relationship that has been brewing between organised labour and sustainable development campaigners has finally been solidified. 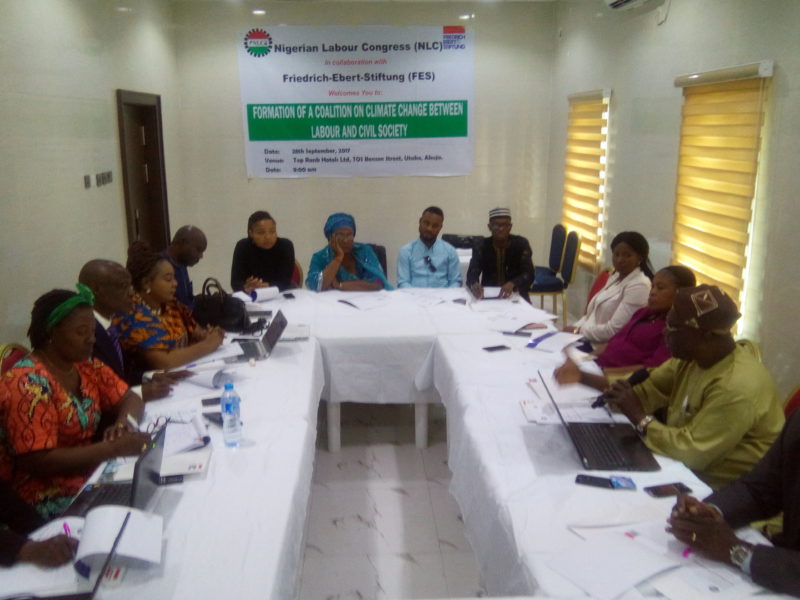 Midwifed by the Friedrich-Ebert-Stiftung (FES), the coalition on climate change involving the Nigeria Labour Congress (NLC) and civil society organisations (CSOs) saw the light of the day at the close of a daylong meeting in Abuja on Thursday, September 28, 2017.

Though details of the relationship are still sketchy, it was gathered however that while the CSOs will provide information and knowledge (as well as its management), the NLC will drive the process – all under the guidance and support of FES, a German political foundation.

Essentially, while ensuring that there is synergy between Labour and CSOs working on climate change, the new Coalition likewise aims to put pressure on policy makers on issues on global warming, in order to inform change in policy decision. 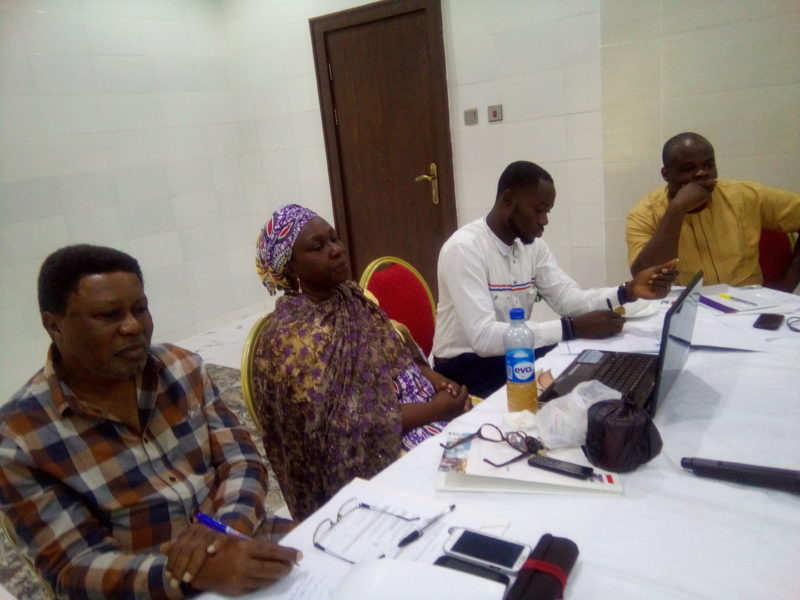 L-R: Ako Amadi of the Community Conservation & Development Initiatives (CCDI), Hauwa Mustapha of the Nigeria Labour Congress (NLC), an official of the NLC, and Dr NwaJesus Anthony Onyekuru of the University of Nigeria, Nsukka

Similarly, the Coalition’s aim is to englighten the public on climate change issues, especially the most vulnerable.

While influencing climate change policy development process for effective implementation, the body is expected to be abreast with up-to-date information and international best practices, and disseminate to the relevant stakeholders.

“The body will be a loose Coalition, and not really a registered organisation. You keep your individual identity, and work on achieving stated objectives,” said Henry Okotie, the FES Project Manager.

According to him, sharing of information and experiences among coaltion members will be key towards ensuring the success of the inktiative. He  suggested that the Coalition should meet twice every year – between February and March, and between September and October.

While commending the initiative, Hauwa Mustapha of the NLC stressed that climate change would affect negatively and positively, even as she called on governments at all levels and private sector players to adequately and speedily respond to situations arising from the phenomenon.

Speaking in a similar vein, Prof Emmanuel Oladipo of the University of Lagos, Akoka, emphasised that climate change is not totally a negative occurrence. “The greenhouses gases (GHGs) that are directly or indirectly responsible for global warming, keeps the earth warm, and support life on earth,” he said.

“We should strive to explore the positives such as the business and financial benefits therein such, for example, seeking to acquire and exploit the technologies needed to adapt to climate change,” Prof Oladipo added.

Dr Godwin Ojo of the Environmental Rights Action/Friends of the Earth Nigeria (ERA/FoEN), frowns and the considerable amount budgeted yearly by governments and businesses to acquire and service generating sets.

“We hereby call on the Federal Government to immediately effect a ban on the importation of generator to, among others, curb the spate of GHG pollution from the equipment. It is unfortuanate that Nigeria has no cap fossil fuel usage,” he stated.

Ako Amadi of the Community Conservation & Development Initiatives (CCDI) expressed concern over the state of disaster management in the country.

His words: “How prepared are we? Where will the technology come from, and how will we use it?

“How do we manage disasters in the event of climate change? We lack disaster management information. We need total orientation of the people.”