October 1, 2017 Comments Off on Gold in ground vs gold in water: Pebble Mine threatens salmon populace, WWF tells Trump 1,463 Views

Hard choices have to be made in the US very soon: is it the gold in the ground or gold in another form in the waters? 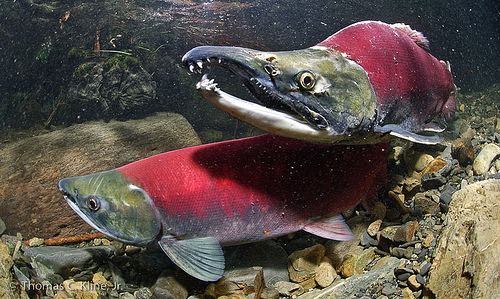 A pair of spawning salmon

Scenario A: Tens of millions of salmon surge through the state of Alaska’s Bristol Bay and about half the amount are caught to feed half of the world’s demand.

Scenario B: Near the headwaters of the bay, mining company, Northern Dynasty, has discovered what is potentially the biggest gold and copper mine in the world.

If the mine is dug, critics warn the side effects could be devastating: poisoning the salmon, acres of wetlands, lakes and ponds, as well grinding the economy of the Bay to a halt.

The Pebble Mine development stalled under President Barack Obama, but President Donald Trump appears to have given the controversial project a new lease of life.

Critics of the Pebble Mine worry that acid could get into the watershed, destroying one of the last great salmon runs left on the planet.

The developers of Pebble Mine insist that they can pull the gold and copper out safely, but fishermen, conservationists, biologists and most native tribes disagree.

Conservation group, the WWF, has joined in the campaign against the project. The group expresses the concern that the US Congress is considering legislation that would eliminate Endangered Species Act protections for foreign species like tigers, rhinos and elephants. It fears that the legislation could damage the US’ ability to curb illegal wildlife trade.

WWF states: “Bristol Bay is a place of stunning natural beauty, abundant wildlife, millions of salmon, and the place of the strongest commercial sockeye salmon runs in the world. It is a national treasure on a global scale.

“The EPA wants to reverse course on its protections, risking the health of Bristol Bay. We need to keep those proposed protections in place to protect Bristol Bay from the proposed Pebble Mine.”

In a petition which WWF is seeking about 150,000 supporters to endorse, the group is asking Edward Scott Pruitt, the EPA administrator, and the Trump administration not to pave the way for the Pebble Mine.

EPA’s own scientific study contains highly concerning facts: even without a mine disaster, construction of the Pebble deposit will destroy 94 miles of salmon streams and 5,350 acres of wetlands, lakes and ponds. Overall, EPA concluded that mining the headwaters of the Bristol Bay river systems could cause irreparable harm to the valuable Bristol Bay fishery, wildlife, and people.

Because of its great ecological and economic value, I recommend the EPA keep in place the 404(c) Proposed Determination for Bristol Bay, Southwest Alaska. The reasonable restrictions included in that proposal will prevent unsustainable development that would adversely impact the region’s fishery, recreation and local culture.

Please keep the agency’s 404(c) action in place to protect one of the nation’s greatest sustainable resources – the Bristol Bay, Alaska, salmon fishery.