Laaniba: Misery by the Ivory Tower

The sight of roaming goats depicted a typical village setting. The muddy houses, the types found in the remotest of villages possible, lend an air of rural scenery to the locality; their (the houses’) openings for wooden windows intercepting the even splash of mud on the walls. Many of the houses are roofed with iron sheets that have caved in to pressure from several years of overuse, and their decolorised frames are fragmentising and falling off the walls they are supposed to protect. 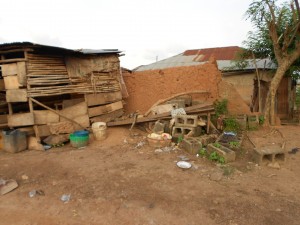 In the heat of the ruthless descent of the scorching sun, two ladies tiredly slowed their steps as they approached their huts, bending down to lower the water pots on their heads and wiping their haggard faces with a piece of lace cloth that had previously served as a neckerchief. Those two are just some of the unlucky lot who regularly trekked long distances to fetch water at a river outside the community, in the absence of a single public tap bearing pipe-borne water. 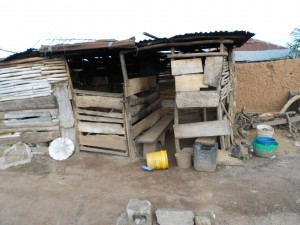 Ordinarily, the people of Laaniba, under Akinyele Local Government in Ibadan, Oyo State, ought not to be grappling with water, housing, and electricity challenges, considering the community’s proximity to the University of Ibadan. In fact, the Ajibode River is its only real separation from the varsity, the rest being a long, straight stretch of road. 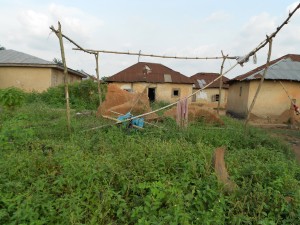 Pa Joshua Olatunji, head of the community whose age is said to be in excess of 100 years, spoke on the problems of the people. “Our road is very useless even though it is better than it was some years back. Whenever it rains, bicycle and motorcycle riders will have a hard time navigating it while cars many times get stuck for days,” he said, removing his cap in a move that amplified the smallness of his body frame.

Replacing his cap, he continued, “We do not have potable water. We drink from the river, and we know it is not hygienic. We know that we will live a healthier lifestyle if we had potable water.”

Although Pa Olatunji offered directions to a river where majority of the community fetch water, he had left out the more important details of other activities at the same river. It is, for example, inside the same river that many inhabitants of Laaniba have their baths — that much was confirmed with the sight of two half-dressed women bathing at the river right in broad daylight. In the dead of the night or the early mornings, it is unlikely that the bathing population at the river would be restricted to just two people. And it is unlikely, too, that the same river is not the people’s favourite defecation spot. The result is a chain of diseases that Pa Olatunji’s traditional roots may not recognise, but which exist all the same, as implicitly confirmed by John Joseph, a secondary school student in his early twenties. 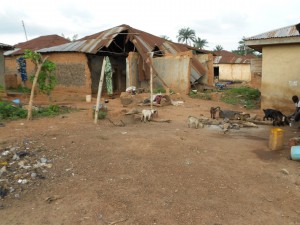 “We need a hospital in Laaniba, and it is very important, especially because of the kind of water we drink,” Joseph pleaded. “When our people fall sick, our closest option is the clinic at Ajibode. Sometimes, the doctors are unavailable; at other times, it is the drugs that are not available, which leaves us with the difficult challenge of rushing sick people to town. You will agree with me that not all sick people will have the grace to endure such long trips to town without giving up the ghost on the way. That is why I said the provision of a hospital is very important.”

He also made a case for a secondary school in the town, saying, “I attend Ajibode Grammar School because all we have here is a primary school. Youths here do not attend school; so many of them just learn trades. And there are no jobs for them even at the end of their apprenticeships, so almost all of them resort to motorcycle riding. Somehow, I do not think that this is all that youths should be dissipating their energy and vigour into. But do they have a choice?” 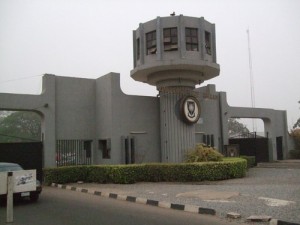 Joseph’s claims were corroborated by Alhaji Ahmed Laaniba, another member of the Laaniba clan, who lamented the lack of government presence in the area for at least two decades.

“Laaniba is supposed to be a town and not a village,” he lamented. “So, how is it possible that a town has no single source of pipe-borne water? I was born here and I am already over 70 years; the last time Akinyele Local Government did anything for us was more than 20 years ago. If the government will give us just potable water and stable electricity, we will be a happy people.”

At an earlier visit to the only primary school in Laaniba, not much was happening in the waterlogged classrooms in the single building, which itself only slightly bettered a typical abandoned building. A second adjoining building collapsed several years ago, and there has been no effort from the government to raise it. The few pupils at the school cut a pitiable picture, many of them playing around while some fidgeted with their notebooks.

In the absence of the principal who was “away on an official assignment,” a teacher, Mrs. H. A. Abraham, conveyed the frustrations of the students and teachers with the run-down state of the school.

“This is a perfect example of how not to run a school,” she quipped. “There are no books, no instructional materials and no facilities. The classrooms are few so you cannot even talk of a toilet or source of potable water. There is a poor attitude among inhabitants towards education. The pupils do not understand English and I have to teach other subjects in Yoruba Language. The consequence is the production of pupils who graduate to secondary schools yet lack what it takes to compete with the rest of the world.”

The solution to the educational woes of the people of Laaniba, she noted, is to first develop the social amenities base of the community, and then watch the ripple effect on other areas of life.

“Without bringing development to Laaniba, these little children will have nothing to show for all the years in this primary school,” she said chillingly. “Without water, without electricity, without urban housing, without hospital, everything happening in the school will simply end up some nasty joke.”

An environmental sustainability group, Let’s Do It World (LDIW),...

The Federal Government has called on state water agencies...