After five decades of the creation of the Lake Chad Basin Commission (LCBC), the basin is still characterised by increasing population and severe drought. 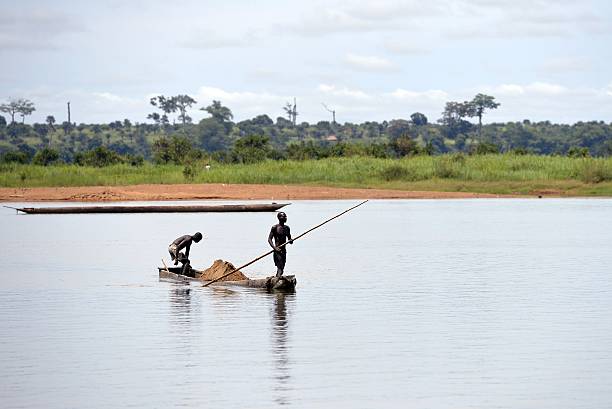 Sand miners on the Ubangui River in Democratic Republic of Congo, where water will be transferred to replenish the Lake Chad

Scholars believe that as the population growth rate increases from 40 million in 2010, to a projection of 62 million in 2030, the consequences of famine, water distribution problems, human and animal disease will also rise.

They said these changes that have occurred could have been because of global climate change, fueled by accelerated population growth.

They also averred that these factors were responsible for the accumulation of social tensions which could have led to the outbreak of the violent insurgency that the region is faced with lately.

In 1992, a decision was taken to develop a master plan for the Lake Chad basin to include the establishment of an environmentally sound management of the natural resources of the Lake Chad conventional basin.

The feasibility study for the water transfer from the Congo basin to the Lake Chad was the second priority project selected for implementation by the Lake Chad Basin Commission (LCBC).

A proposal to transfer water from Congo to the Lake Chad was submitted to the LCBC in 1984 at the height of the most severe drought affecting the Lake Chad basin.

This proposal was approved and shared by the then President Mobuto Sese Seko of Congo, but was considered to be too big, hence a similar proposal of taking water from the Ubangi river to the Lake Chad was adopted by the Member-states of the LCBC.

Raising an estimated $6 million for the pre-feasibility study of the Ubangu-Lake Chad Inter- Basin Water Transfer became a problem until the government of Nigeria under President Olusegun Obasanjo provided support and launched a diplomatic campaign to get the no-objection of the two Congos.

The conduct of the feasibility study was awarded to a Canadian firm, CIMA International, with work commencing on the October 13, 2009 for a period of 28 months.

The study was concluded in 2011 with the conclusion that the Ubangi-Lake Chad Inter-Basin Water Transfer project is technically feasible and economically viable from the Congo basin via the State Ubangi River to Lake Chad through an inter-basin transfer, a pumping transfer via the Palambo Dam and a gravity transfer through a deviation of the Koto River.

The combined cost estimate of the projects for the transfer was put at $14.5 billion.

The result of the study was endorsed by the 14th Summit of the Head of States and Government of the LCBC on April 30, 2012.

Delivering a speech at the ongoing International Conference on Lake Chad in Nigeria, the Executive Secretary of the LCBC, Sanusi Abdullahi, said there was no solution to the shrinking of the Lake Chad that does not involve recharging the Lake with water from outside the basin.

He opined that the issue was not an option but a necessity, saying the region was faced with the possibility of the Lake disappearing with catastrophic effects to the African continent.

“Poverty, misery, loss of hopes and the spread of violent extremism, human trafficking and migration in the Lake Chad has endured for too long.

“It must come to an end, that is the task before all of us.”

The Chairman of the Council of LCBC Ministers, Mr Issoufu Katambe, commended Nigerian Government on its efforts at paying its annual dues, calling on all other member-nations to contribute their quota towards the realisation of the restoration of the basin.

He stressed the need to find sustainable solutions to the Lake Chad crises, saying that ending violent extremism would require the deliberate action of solving its root causes, such as poverty and unemployment.

Katambe also said that member-nations ought to promote regional integration, educate all stakeholders and deliberate capacity building, adding that this was a sure way to tackle the ongoing challenges.

However, the solution to Lake Chad insecurity became obvious with the opening up of new opportunities and sustainable solutions through regional partnerships and economic integration.

Sharing a different view on the Lake Chad restoration, a water engineer, Guy Immega, advocated the use of solar energy to recharge the drying lake chad basin to promote livelihood for those in the region.

According to him, the use of solar is a cost effective approach that could provide technical and social benefits to the  benefiting countries.

“The solar option is the best choice because it is approximately 10 per cent of the cost of a hydroelectric dam, no flooding and displacement of villages and people.

He said using this option would enable an inter basin water transfer project that would not have direct consequences on the Democratic Republic of Congo and its neighboring countries.

According to him, Lake Chad was once the most important freshwater ecosystem in the Sahel, providing sustenance to 30 million people living in Africa’s central sub-Sahara.

He said in the last 50 years, it has shrunk to less than 10 per cent of its former size, leading to a major humanitarian crisis.

Immega commended the Lake Chad Basin Commission (LCBC), representing the countries surrounding the lake, for studying the problem and seeking a viable approach for Inter-Basin Water Transfer from the Ubangi River to replenish the Lake.

Stakeholders believe that what the Lake Chad region is asking the African leaders is to look at the problem of insecurity and lack of infrastructural development.

All in all, experts believe that the continent should align its interventions with the Agenda 2063 for the sole purpose of socio-economic transformation of the continent, just like the dream of its founding fathers.