The Golden Rice (GR) is genetically engineered to produce provitamin A carotenoids, in particular, beta-carotene, to supposedly help combat vitamin A deficiency (VAD), especially in developing countries. In 2016, the International Rice Research Institute (IRRI) filed an application with Food Standards Australia New Zealand (FSANZ) for the market approval of food derived from Golden Rice for import in food. 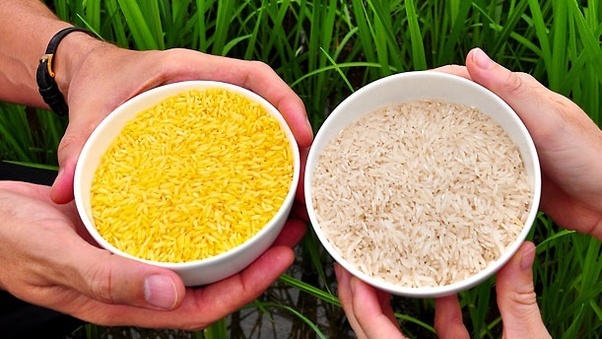 The application was filed for the “Golden Rice 2” (GR2), a second generation trait with a reportedly much higher content of carotenoids than the first generation of Golden Rice. For the application, a line of GR2 (called GR2E) was crossed into indica rice varieties. Data was submitted from greenhouse and field trials conducted in the Philippines. In 2017, FSANZ gave approval for GR2’s import and usage as food.

An industry campaign was initiated to support the application: Amongst the submissions sent to FSANZ were several letters from companies such as Bayer, Dow and Syngenta.

Data from the application show that the plants grown in field trials produce a much smaller amount of carotenoids (3,5µg/g – 10.9 µg/g) compared to the original GR2 event, which is supposed to produce a maximum of more than 30 µg/g. Further, while previous publications identified beta-carotene as having a percentage of around 80 percent of the total carotenoids, the rice in the field trials only reached 59 percent. It is not clear if this much lower content in carotenoids is due to the varietal background or to environmental conditions. Further significant reduction in the content of carotenoids has to be expected due to storage, processing and heating of the grains in food preparation. Thus, in regard to the nutritional quality of GR2, this application gives the impression that the potential benefits of the rice claimed in the submissions from industry are greatly overestimated, and cannot be realised under practical conditions.

Recent publications on similar lines of Golden Rice show genetic instability if they are crossed with other varieties; these were not discussed by FSANZ even though they are also relevant for food safety. Data from the applicant also show that the expression of the transgenes is impacted by varietal backgrounds and is dependent on interactions with the environment. Therefore, it would be necessary to gather more data on the range of variability that can be expected under a broader range of genetic backgrounds and in interaction with biotic and abiotic stressors. Based on the data available, no final conclusions can be drawn on the genetic stability of the rice plants.

There are further reasons to doubt the reliability of the data provided by IRRI: Surprisingly, the line which showed lowest concentration of carotenoids was chosen for field trials and compositional analysis. One possible explanation is that the applicants wanted to establish safety at a low level of transgene activity. Such a low level can decrease the likelihood of unintended changes in plant metabolism and composition. Therefore, such plants might appear to be “safer” compared to plants with a higher level of transgene activity. Consequently, the data for risk assessment cannot be regarded as reliable for determining food safety of the GR2 lines with a higher carotenoid content, if such lines were available.

According to IRRI, the consumption of this rice is especially beneficial to young children as well as lactating and pregnant women. At the same time, it is self-evident that food products with no history of safe use must be subjected to the highest standards of risk assessment before the most vulnerable groups of the population are exposed to it. However, no toxicological studies were performed with the rice. In the light of the humanitarian claims made in the context of GR2, it is surprising that this application is not based on a full set of data to establish high safety standards.

This application does not show substantial benefits. Furthermore, the risk assessment as performed by FZANZ is not sufficient to demonstrate safety of food derived from GR2.

Testbiotech comments on the data submitted by IRRI

Testbiotech concludes that given the substantial risks associated with the cultivation of GR2 plants and existing uncertainties in regard to negative health impacts, the application indicates a high likelihood of risks without substantial benefits.

Like Loading...
2018-02-09
admin
Previous: $1.06b UN scheme to help fragile countries create ‘firewall against famine’
Next: International Day of Women and Girls in Science: Underlining need to overcome stereotypes, biases