A non-governmental organisation, the Environmental Management and Development Trust (EMADET), has taken up a campaign to promote the use and conservation of the local wrapping leaf. 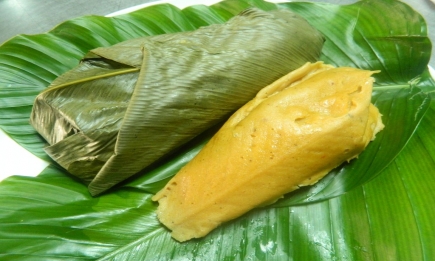 The wrapping leaf, otherwise known as Thaumatoccocus danielli (or Ewe-eran in south west, Nigeria), is a kind of leaf that is used for wrapping hot local food.

Director of Programme, EMADET, Mr Alade Adeleke, made the disclosure in Ile-Iran, Osun State on Sunday, October 14, 2018, on the sideline of the Global Environment Facility (GEF) inspection and evaluation visit to the group’s project site in Ile-Iran community.

“Women use it in wrapping bean cake (Moin-moin) and corn meal (Eko or Agidi) in major urban centres,’’ the programme director said.

Adeleke said that the organisation had a nursery that had more than 10,000 leaf sampling.

“We decided to be taking the leaf from nursery to other places to plant in each of the farms where we go and do the farmers face school,’’ he said.

“We also realise that people use nylon because of the depletion of forests and non-availability of wrapping leaf.

“Our survey across the 10 towns of Osun State and even in Lagos showed that wrapping leaf is scarce and lack in demand.

“The need for wrapping leaf is so high that everybody knows the implication of using nylon that is not good; the aroma, the feeling about heating local hot food from nylon is not as good as wrapping leaf.’’

“Another thing we noted was that new generations were losing cultural method of using the leaf to turn the food.

“So, we brought about 10 children together to do competition on how to quickly turn the leaves so that they will know how to use it domestically.

“We introduce a leave exhibition and, by the grace of God, EMADET will continue the leaf exhibition annually,’’ Adeleke said.

He said that the organisation also observed that the traders of the leaf had to travel out of Osun State due to non-availability of the leaf.

“Women that sell the leaf around say they use more days to go and get their products. Some travel to as far as Edo State to get the leaves.

“This leaf grows where forests are intact. It can only grow with cocoa agro-forest. When you plant cocoa, it is only forest ecosystem that grows it. So, cocoa agro-forest mixes natural forest,’’ he said.

According to him, the leaf grows in the floor of agro-forest plantation. Ordinarily, it spreads easily, and it grows through its own root and multiply easily.

“It used to occupy the tropical rain forest easily without any problem but where forest is depleted, the leaves will be off,’’ he said.

According to him, people see environmental value in the leaf because it bio-degrades easily.

EMADET, a grantee of the GEF/United Nations Development Programme (UNDP) Small Grants Programme (SGP), is likewise training farmers on agro-forest production in the community, which is in Ayedire Local Government Area of Osun State.

GEF is supporting EMADET with a grant of $49,938 to execute a project titled “Integrated Agro-Forestry, Waste Management and Livelihood Enhancement” in Ile-Iran and its environs.

Adeleke, who said that his organisation began the training programme on Feb. 13, added that the idea was to teach farmers how their farms could perform better.

“The training is Farmers Face School Programme because the programme was held and delivered in each of the farmers’ farms.

“We have carried out Farmers Face School Programme in six places. For every farm we go, we distribute some farm material such as cutlasses, hoes and farm chemicals,’’ he said.

He said that the training focused on the new approach to agro-forest production to bridge the gap of deforestation in South west, Nigeria, using Ileran and its environs as its local example.

According to him, Ileran was chosen because of its location that is near the Osun River and also the tail end of tropical rain forest area.

“Because forest is depleting, most of our land are being converted to savanna.

“EMADET as an organisation feels that something must be done as example to arrest the growing rate of deforestation,’’ the programme director said.

According to him, the organisation chooses wrapping leave as element that makes the forest to look better.

“Before we don’t know that the way we apply chemical kills our farm produce and the forest but when we apply what EMADET taught us, things in our farms are doing well.

“Apart from giving us training, the organisation also gave us farm implements such as hoes, cutlasses and chemical to fumigate our farms,’’ he said.

Mrs Hadijatu Ileowo, a farmer, said that she increased the cultivation of wrapping leave through the training programme given to them by EMADET.

The Balogun of Ile-Iran, Mr Asifatu Awesu, who said that villagers fetched river water for domestic use, thanked the organisation for repairing their damaged borehole.