The Government of Gabon is engaging other African countries to collaborate in marine protection and the fight against illegal fishing in the continental waters. 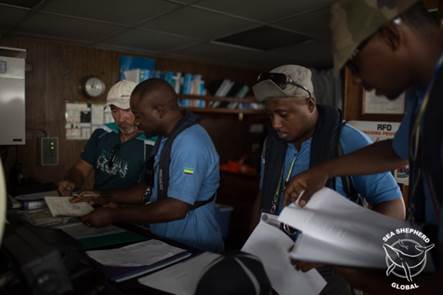 The announcement follows the successful conclusion of a five-month long surveillance and control mission’s intense investigation at sea dubbed Operation Albacore, a pioneering collaboration between Sea Shepherd Global, a global NGO that fights illegal fishing and conserves marine biodiversity, and the Gabonese Government.

During the operation, national agencies, including the National Parks Agency (ANPN) and the army patrolled Gabon’s Exclusive Economic Zone (EEZ).

The Gabonese Minister of State and Minister of Fisheries and Livestock, Gabriel Tchango, said that Operation Albacore brought to light the heavy toll of illegal fishing and the need for effective law enforcement and collaboration. 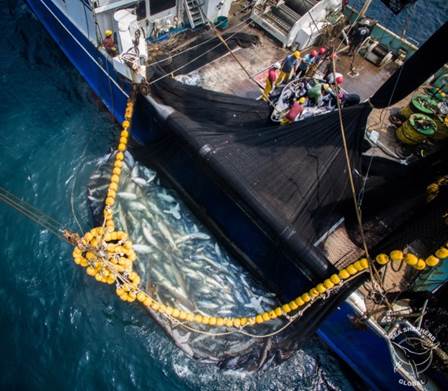 An EU tuna boat with nets full of sharks and tuna

“Fishing is an important economic activity for our country. Gabon’s EEZ covers an area of over 200,000 square kilometres of highly productive waters, accounts for 20% of Atlantic tuna global catches. As a continent, we need to join hands to fight illegal fishing that threatens our economic mainstay,” Mr Tchango stated, adding that is having discussions with Equatorial Guinea and hopes to expand the operation next year to others countries in the region.

Some 60 Gabonese and Sao Tomean technicians and military personnel were trained to board tuna and other boats on the high seas and to undertake audits of the boats’ paperwork and cargo. During the 2016 tuna-fishing season, Operation Albacore conducted five missions of 21 days in Gabonese and Sao Tomean waters. The most horrifying discovery by a mixed team from Gabon and Sao Tome boarding a Spanish longliner authorised to fish tuna in Sao Tomean waters was the extent and violence of the by-catch. 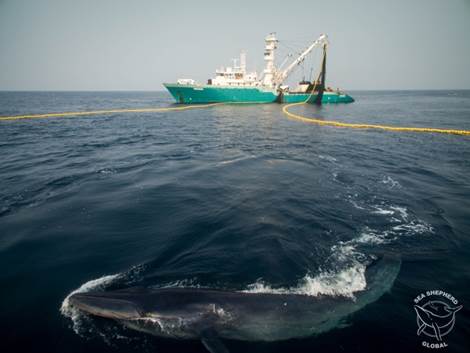 A Bryde’s whale caught in an EU tuna net

Dr. Mike Fay, a special advisor to Gabonese President S.E. Ali Bongo Ondimba for the “Gabon Blue” programme and National Geographic Explorer in Residence, describes the horror of what they found: “The freezers were crammed with thousands of shark fins – there must have been at least 20 tons – and not a single tuna was visible. This boat had been illegally massacring sharks in contradiction with its license and against EU regulations”.

“Gabon’s goal is to become an innovative regional leader for marine protection. We are determined to convene our neighbours and the rest of Africa to fight illegal fishing, such as the massive shark catch of the long liner fleet,” said Minister of State and Minister of Foreign Affairs, Emmanuel Issoze-Ngondet. Whales, dolphins, sharks and turtles are regularly captured in the tuna nets. 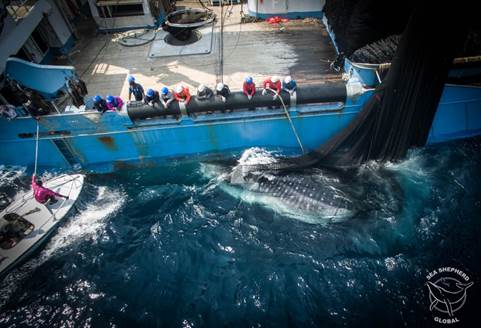 Gabon launched the “Gabon Blue” programme in 2012 under the leadership of Dr. Mike Fay and Professor Lee White, head of the National Parks Agency. That same year, the ANPN and the Waitt foundation led a marine expedition to explore Gabon’s seabed onboard the Plan B, a state-of-the-art marine research vessel.

After visiting the team on board the Plan B, President Ali Bongo Ondimba made a commitment to “launch a marine conservation and management programme and to do for our ocean what we have done for the forests”.

George Mba Asseko, Director General of the Gabonese Fisheries and Aquaculture Agency, stated that he was ready to propose legislation to government to declare a series of marine protected areas covering 23% of Gabon’s EEZ.