The spate of flooding spreading across the land may not abate soon. In fact, if recent revelations are anything to go by, the situation is about to worsen. 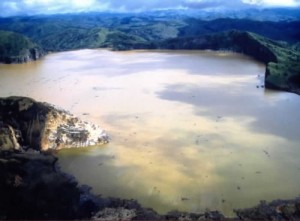 The latest threat is coming from the least expected source: a harmless-looking but notorious lake in neighbouring Cameroon known more for releasing killer gases than causing flooding: the Lake Nyos.

Exasperated officials of the National Emergency Management Authority (NEMA) disclosed on Thursday in Abuja that the volcanic rock forming the natural dam which holds water in the lake is weak. So weak that it is expected to eventually lead to the failure of the dam.

And, alas, if the dam should fail, the upper 40 metres of water would spill out, leading to an immediate eruption and a major flood extending all the way into Nigeria.

Benjamin Oghenah, NEMA’s Assistant  Director, Planning, Research & Forecasting, disclosed that the collapse of the dam would result into the release of water at an estimated peak discharge of 17,000 cubic metres per second into Kumbi River, discharging into Katsina-Ala River in Nigeria.

Zanna Muhammad, NEMA’s Director of Administration, said that the wall of the dam may fail as a result of gradual erosion from rain , wind and lake waters or as a result of violent volcanic eruption, earthquake or tremor.

“Continuing erosion of the wall in Lake Nyos has put the dam at a point of potential collapse as predicted by United Nations Development Programme (UNDP) report of 2005,” he disclosed, pointing out that the study further warned of a possible breakdown of the dam within 10 years.

Muhammad’s words: “The eventual failure of the dam will result in the discharge of about 55 million cubic meters of water which will result in flooding downstream. It is estimated that between Cameroon border and River Benue, 50 settlements including Katsina-Ala, Kashimbilla, Waya, Manga, Gamovo, Andie, Terwegh and over 15,000 hectcres of land will be flooded.

“Also over 1 million people and 20,000 herds of cattle and livestock will be caught within the flood part and could perish. The financial losses are estimated to be in billions of naira, comprising crops, residential and commercial structures, utilities and infrastructures, including roads and bridges and other services.”

Oghenah stressed that, besides flooding, the collapse of the Lake Nyos wall could also result in toxic gas emission as well as an epidemic outbreak. As a way out, he called for the establishment of a fully fledged police station and Civil Defense Corps Station around the areas mostly at risk, evacuation of such settlements, more sensitisation of communities in the frontline states, procurement of more early warning equipment, and the authorities expediting the Gormovo Dam Construction work at Kashimbilla district in Taraba State.

Lake Nyos is located in western Cameroon, lying within the Oku Volcanic Field, at the northern boundary of the Cameroon Volcanic Line, a zone of crustal weakness and volcanism. The Lake covers an area of about 1.5 sq.km and is over 200m deep.

In August 21st 1986, a cloud of carbon dioxide bubbled out of the lake and swept down the surrounding valley, killing thousands of animals and an estimated 1,700 people, many in their sleep within a 25km (15-mile) radius of the lake.

The area around the lake was evacuated after 1986 episode but people have started to move back to take advantage of the good grazing land.

Courtesy of NEMA, on 6th January, 2006, former President Olusegun Obasanjo called an emergency meeting of NEMA, Governors of Adamawa, Akwa- Ibom, Cross River, Taraba, Benue, kogi and Ministers of Agriculture, Finance and Water Resources to consider the threat of Lake Nyos to Nigeria. The then President directed the Federal Ministry of Water Resources to consider the option of constructing a dam on River Katsina-Ala.

In September 2006, the Agency and the expert team of the National Technical Committee on Earthquake Phenomena (NTCEP) visited the five identified states (Benue, Adamawa, Taraba, Cross River and Akwa-Ibom).

In November 9, 2006, 12 members of the House of Representatives Committee on Emergency and Disaster Management and four NEMA staffers visited the frontline states on a sensitisation tour on the imminent volcanic eruption of Lake Nyos and its disastrous implication.

April 26, 2007, the Federal Executive Council approved the award for the construction of the Kashimbilla Multipurpose Dam across Katsina-Ala River, which is about 10 kilometres up stream of Kashimbilla Village in Taraba State to Messrs SCC Nigeria Limited with a completion time of three years.

On September 2008, The Agency in collaboration with other stakeholders put in place a Search and Rescue and Epidemic Evacuation Plan (SAREEP) for Nigeria. The plan covers flood and other disasters.

The NEMA, in collaboration with UNICEF and other stakeholders, is in the final state of carrying out Vulnerability Capacity Analysis (VCA) for the country. This is to establish the coping capacity of some of the vulnerable communities. Communities in some selected states are being used as pilot projects.

Among the frontline states, Benue is considered most exposed to the Lake Nyos disaster, prompting the state government to intensify preparedness and mitigation planning. As a result of an independent study of risks and vulnerability of the people, the government has identified high ground community’s schools, places of worship, etc, for rapid evacuation of the most-at-risk population in the event of the dam break.