The Minister of State for Environment, Ibrahim Usman Jibril, has spoken with one voice with the Benue State Government to appeal to residents of Makurdi and other towns to stop building structures along waterways and on drainage channels so as to allow for free flow of storm water. 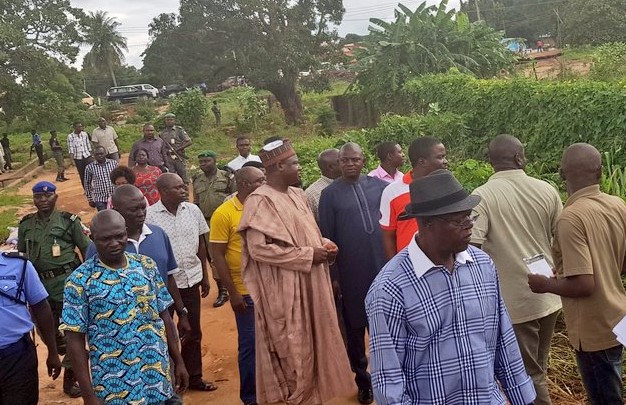 The minister made the appeal on Monday, September 4, 2017 when he led a delegation from the Federal Ministry of Environment to the state as part of Federal Government’s commitment to the ongoing intervention and support to Benue State on the flood disaster that has affected over 100,000 residents across the state.

According to the minister, blocked water channels contributed largely to the scale of the present disaster.

Speaking with the Governor Samuel Ortom on arrival, Jibril commiserated with the people and government of the state, and reiterated the need to collectively address climate change. He called for a deeper care of the environment which, according to him, has a very lasting impact towards the mitigation of disasters like floods.

“Climate change has resulted in heavy rainfall and rising sea levels globally and leaving in its wake global and local consequences of flooding,” he said.

During the assessment tour of the flooded areas and some camps for the Internally Displaced Persons (IDPs) in the state in the company of the Deputy Governor, Benson Abounu, the minister expressed concerns over the level of devastation where the most vulnerable continue to bear the brunt in terms of loss of livelihood and shelter. He appealed to the donor and international community to assist the state government tackle the disaster.