Ongoing dredging work at Oworonsoki in Lagos is causing a lot of mud to settle around the Agoegun fishing community in Bariga and appears to have caused the fishes in the lagoon in the axis to migrate into the ocean. 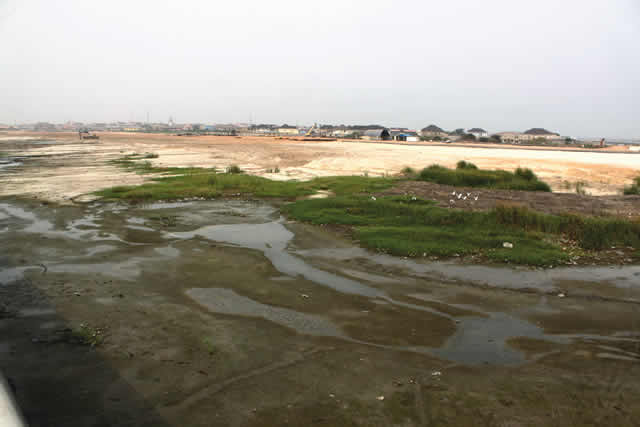 A portion of the land being reclaimed

“If we in this community now want to fish, we are compelled to go as far as Ikorodu, Ibeshe and Ajah,’’ Chief Felix Joseph, the Baale (community leader) of the Agoegun Fishing Community, Bariga, told the News Agency of Nigeria (NAN).

The community is located directly opposite the ongoing sand filling site at the Oworo side of the Lagos Third Mainland Bridge.

Checks by Correspondents of NAN at the community showed stagnated shallow water and black mud surrounding local boats parked at a place once bubbling with fishing and sand dredging activities.

The sand filling did not only block the natural drainage channels into the Lagos lagoon at Oworonsoki, but it also blocked boats’ access to the lagoon, thus hampering fishing activities.

While some women were seen preparing fish for smoking in the local kiln, others had fishes on wide iron guzzles on raised mud platforms, under which heat emanated from firewood.

Some of the men were seen patching torn fishing nets, in readiness for fishing.

The fishing community houses were makeshift apartments erected on a land, reclaimed with heaps of refuse.

Joseph said the community’s nightmare started in 2017 when the dredging and sand filling of the Oworo shoreline started.

“We now go very far to catch fish and we use fuel boat engines. Now, we use N6,000 each to fuel our boats to the high sea on fishing expeditions.

“We do not now fish every day. At times, we now go on expeditions and we are unable to find any fish.

“We want government to bring small, small dredgers to remove the mud that is now gathering here, so that our boats can be able to go out to the sea and from here, and also be able to return here.

“No boats can go from here now,’’ he lamented.

Joseph said that before the sand filling, some of the fishermen plied their trade on the lagoon at Oworo, and did not have any need to go far or use engine boats.

Mrs Regina Bodo, a fish trader and resident of Agoegun, said that what the Lagos State Government had done and was still doing to the community, with regard to the project, was not good.

“We have been hearing this for a long time. This land belongs to our ancestors and this is where we were all born.

“Fishing is our occupation. We do not have any other job.

“Now, this dredging they are doing in Oworo has caused a serious problem in our fishing community as they have chased the fishes away from the lagoon into the sea and we now need big boats to be able to fish in the ocean.’’

Bodo said that to buy fish now, the traders had to meet the fish sellers at any point where the sand filling had been stopped temporarily, adding that it had not been easy for members of the community.

Miss Maria Jikieme, a smoked fish dealer at the Ilaje Modern Smoked Fish Market, said that sand filling at Oworo had brought untold hardship to those involved in the business there.

“Before, fish sellers do come with their boats in front of the complex, but because of the mud, they cannot come here again.

“That is why this market is not bubbling like before.

“Fish traders and smokers now go far into the lagoon to buy fish from sellers, and it has not been easy,’’ she said.

Mrs Abodunwa Ebun, told NAN that she had been in the market since it was opened.

“We see only small fishes around here; now, there are no more big fishes as it used to be before the dredging started.

“You can see for yourself; the smoked fish business has been deserted, unlike before, when by this time you will not see any road to enter the market. The whole place would be covered with fish.

“It is part of what the sand filling at Oworo has caused. Our government does not even care about us.

“Yet, they want us to pay tax from our business which they have destroyed,’’ she said.

Ebun said that the World Bank that built the smoked fish market recognised their importance but our own government has deprived us of our means of livelihood.

Mr Segun Zebulon, the Chairman, Fishermen Cooperative Association, Bariga Local Government, said that the sand filing, for whatever reason, was a big slap on the fishing community in Oworo and Bariga.

According to him, that place is a passage for the boats of fishermen living in that axis and many of us have cage farming at Oworo before the sand filling started unannounced.

“There was no notice. We woke up one day and saw dredging machines, and that was how we lost our cage farming and huge investments we had on that side of the lagoon.

“Up till now, nobody cared about our losses, no compensation, nothing.

“When the dredging started, we complained to the Lagos State Ministry of Agriculture.

“All we got was that it was beyond them, as it was Gov. Akinwunmi Ambode’s project,’’ he said.

Zebulon said that the fishing community suffered similar losses in 2011, when over 5,000 houses were demolished too, and nobody paid attention to their plight till today.

“With the present sand filling, all the fishermen, who did not have outboard engines have been caged, as they can no longer go out and come back freely, as before.

“That Oworo area was home to Tilapia fishes, and our women do pick periwinkles and other sea foods on the shoreline.

Now, all those have been lost. At times, the sand filling affects the outboard engines too.

Zebulon said that with good infrastructure, healthcare centres, schools and loan assistance, the fishing community could do much more.

“We have always heard of Lagos becoming a mega city, and I keep asking: ‘What is the need of a mega city when the government cannot even megalise the people?’

“Fishing is done in streams, rivers, lagoons, the ocean and Nigerian government cannot close its eyes to fishing communities because we live around and ply our trade on water.

“Instead of demolishing or causing the community untold hardship, government should develop the communities and fit them into the urban development plan,’’ Zebulon said.

The Fishing Cooperative chairman said the community needed storage facilities in the area.

According to him, just as Titus fish is stored more than six months before being imported into the country, given the necessary facilities, the fishing community would even do better.

The state government started the reclamation of 29.5 hectares of land at  Oworonshoki early in 2017.

Ambode, on inspection of the ongoing work, said that the project, expected to be completed in three phases, would give the Oworonshoki area the facelift it deserved.

The sand filling was billed to be completed in November 2017. Then, provision of shoreline protection and reconstruction of Ariyo Street by June 2018, and the construction of a mega jetty and a bus terminal with entertainment and tourist centres.

However, no consideration was given to fishing activities in the area and the welfare of the fishing community.

In his response, the Commissioner for Information and Strategy, Mr Kehinde Bamigbetan, told NAN that the issue of compensation for the fishermen was subject to a request from them.

Bamigbetan, however, declined comments on the cost of the project, stating that, “the project, being an ongoing one, its cost cannot be determined at this stage.’’

He said that the project was being executed in three phases.

“Phase One is the reclamation of the 29.5 hectares of the project site by Messrs Fountain Construction Company (FCC) and it was completed in November, last year.

“Phase Two involves provision of shoreline protection and reconstruction of the 2.8km Ariyo Street, as an alternative road that will run under the Third Mainland Bridge, along with other infrastructure, and is expected to be completed by June, 2018.

“The third Phase which will be both financed by the state government and the Public Private Sector (PPP), will involve the construction of the Mega Jetty and a Bus Terminal, complete with entertainment and tourism facilities (Multiple Boutique, Hotels, Museums/Arts Galleries, Sport and Recreational Facilities), as well as a 1,000 capacity car park, based on the designed master plan of the area,’’ he said.

Bamigbetan said that the project, when completed, would transform the Oworonsoki waterfront into one of the biggest transportation, tourism and entertainment hubs in the nation.

He noted that the project would also improve security and the beauty of the environment, to attract investments in water transportation and improve socioeconomic activities on the axis.

The state government also said that there was no need for the residents of the community and the state to panic over the project, which it argued would bring huge benefits.

Bamigbetan said that it had carried out a proper environmental impact assessment before embarking on the project, insisting that the EIA report on the project had taken care of future any negative impact on the environment.

He was quoted by a media report to have said, “The waterfront has, by the reclamation, been extended. This means that those living on the old waterfront now have a large expanse of land abutting their respective locations.

“If those locations now belong to them by law, there should be no cause for alarm. They stand to benefit from future developments on the axis. This means they would be the ready pool of labour for construction projects, and their tenement will be enhanced by the investment, flowing into the site.

“The Lagos State Government, as a responsible entity, pursues a policy of ensuring that Environmental Impact Assessment is done by every individual or corporate body that seeks to embark on projects. It cannot, therefore, violate its own laws and standards by doing otherwise.’’

The area which used to be occupied by fishermen, boat operators and sand miners, is currently being reclaimed by the state government, to improve connectivity to other parts of the state and make the Oworonsoki waterfront one of the biggest transportation, tourism and entertainment hubs in the country.

By Chidinma Agu and Grace Alegba