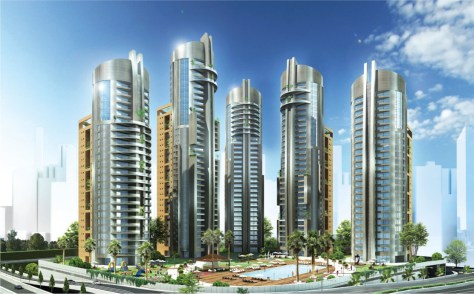 An impression of the Eko Pearl Towers

Eko Pearl Towers is a set of high-rise buildings, privately owned and developed by the Eko Pearl Construction Company. The development, which is situated about 500 meters away from the financial centre of Lagos on Eko Atlantic City, consists of five high rise residential towers, each topped with deluxe penthouse types, two and three bedroom luxurious apartments with a view of the Lagos coastline.  Following the unveiling of the first tower, the Black Pearl, the second, tagged the Champagne Pearl, is scheduled to be completed in 2017.

The Eko Pearl Towers will range from 24 to 33 floors; comprising four apartments per floor, two apartments on the royal penthouse floors, a technical floor, terrace floor, a ground floor and a basement floor. Facilities at the new residential building include a pool, tennis court, squash court, fitness centre, meeting rooms, lounges and leisure areas suitable for families and professionals.

On-going developments by other clients in Eko Atlantic City include the Azuri Peninsula, the Eko Energy Estate and Alpha 1.

The Marina district is a residential and commercial hub in Eko Atlantic City. A pedestrian promenade encircles the Marina offering inspiring views in every direction, from the ocean-going yachts to the notable architecture.

Speaking on the development, the Vice Chairman, South Energyx Nigeria Ltd, Mr. Ronald Chagoury Jr., said the completion and unveiling of the Eko Pearl Towers marked a significant milestone for the Eko Atlantic project. “We are very excited to see the city come to life, with the first set of residents moving into the city and we look forward to the completion of other landmark projects within the city,” he said.