The Environmental Rights Action/Friends of the Earth Nigeria (ERA/FoEN) has described a Dutch court ruling today which held Shell liable for the pollution of fish ponds and farmlands in Ikot Ada Udo community in Akwa Ibom as a major watershed in the quest for environmental justice in the Niger Delta. 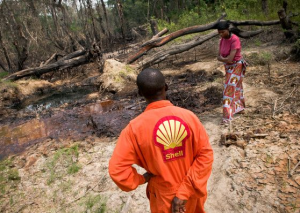 The group disclosed In a statement issued in Lagos that while it disagreed with the court’s position that the polluted farmlands and fishponds in Goi and Oruma, in Rivers and Bayelsa states respectively were due to alleged sabotage by local community people, the ruling on Ikot Ada Udo has set a precedent for global environmental accountability because companies can now be tried in their home countries for their acts or omissions in their host countries.

Four farmers, supported by Friends of the Earth (FoE), dragged Shell to the court in The Hague, Netherlands, thousands of miles away from their communities in Nigeria where Shell’s defective pipelines caused damage to their fishponds and farmlands in 2004, 2005 and 2006. Shell has consistently denied responsibility. It refused to clean-up the spill and did not pay compensation.

The Hague Civil Court said that the level of damages in the case of Ikot Ada Udo would be established at a later hearing.

It rejected claims by the two other communities, saying the pollutions were caused by saboteurs, and that, under Nigerian law, oil companies are not responsible unless they breach their duty of care. The Goi and Oruma communities have three months to appeal.

ERA/FoEN Executive Director, Nnimmo Bassey, said: “Finding Shell guilty of the spill at Ikot Ada Udo is commendable but we want to see how Shell can celebrate the faulty conclusion reached by the court that they can be exonorated from the ecocide at Goi and Oruma. The company’s disdain for the wellbeing of communities that suffer the impacts of its reckless exploitation of oil in the Niger Delta has been legendary. The spill at Ikot Ada Udo went on for months and in open farmland and yet Shell had the temerity to fight to avoid culpability. It is just and fair that it is held accountable for this crime.

“This win for Ikot Ada Udo has set a precedent as it will be an important step that multinationals can more easily be made answerable for the damage they do in developing countries. We anticipate other communities will now demand that Shell pay for the assault on their environment.

“Until now it has been very problematic because it is difficult to bring cases against these companies in their home countries, because the legislation is often not advanced or properly applied.”

“Shell’s volte face in the face of incontrovertible evidence has again shown the double standards of the oil companies in treating spills incidents in Nigeria differently from their pollution in Europe or North America. We are still optimistic that the Goi and Oruma communities will get justice. The ruling against the two communities will be appealed,” Ojo stressed.

The United Nations Economic and Social Commission for Asia...

Given the multi-disciplinary nature of environmental issues and the...

While science shows that the crisis facing the natural...