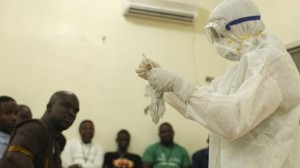 One of the medical officers that attended to late Ebola victim, Liberian-born Patrick Sawyer, has died after she became infected with the virus.

The nurse came into direct contact with the late Liberian-American man, according to officials of the Federal Government.
At a press briefing held today, Minister of Health, Onyebuchi Chukwu, confirmed that six other people have tested positive to the ravaging virus.
Chukwu said all the six people who tested positive to the Ebhola virus had primary contact with the Liberian-American, Sawyer, who died in a Lagos hospital last month July after arriving for an ECOWAS conference billed for Calabar, Cross River State.
Chukwu further urged state governments to open up more isolation sites so as to contain people who might need to be treated or isolated in the event that more people are infected of the quick-killing virus.
Although her case is not the first domesticated case of the Ebola virus in the country, she is the first Nigerian to die from dreaded disease.
Following the reported cases, the Nigerian government has made an urgent request for the experimental drug in possession of the U.S. Centre for Disease Control.
The drug, although only experimental, is being used in the treatment of the two American doctors infected in the West African nation of Liberia and with both said to be responding to treatments, hope is rising that a drug for the dreaded virus which has killed almost 900 people is now in existence.

The Minister of State for Petroleum Resources, Timipre Sylva,...

Shell harps on safety ahead of Bonga Turnaround Maintenance

The World Bank Group (WBG) has expressed its readiness...