In Ghana, many people, especially women, who live along the coastal areas, are engaged in fish smoking, known as “Namhowfo” in Akan, one of the languages spoken in the country. As a means of living, fish smoking was done by traditional, energy inefficient and smoking stoves. This method affects both human health and the environment, say observers. 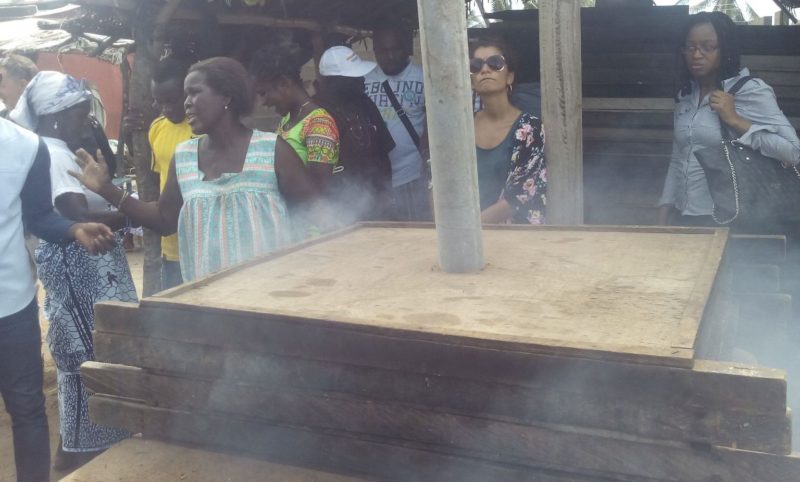 Fish being smoked with the improved Morrison stove

According to the Netherlands Development Organisation (SNV), in Ghana like in other countries, traditional fish smoking stoves expose women to harmful smoke. This causes 16,600 deaths annually, in addition to environmental degradation, which comes in form of mangroves destruction. Mangroves are the sources of fuelwood for fish smoking.

A survey by SNV gives 120,000 as the number of traditional and Chorkor fish smoking stoves that are used in coastal regions for fish smoking. The survey states: “The smoke from these stoves affects people’s eye-sights and also causes lung-related diseases.”

This development informed SNV’s decision to develop the Morrison Improved Fish Smoker that seeks to attain 40 percent efficiency in fish smoking. Today, many communities are enjoying the new technology along with the FAO Thiaroye Technology (FTT) stove, transferred to Ghana from Cameroon.

Also, in order to improve the livelihoods of women involved in fish smoking and combat the deforestation associated with their activities, the Renewable Energy sector of SNV got funding from DGIS for a two-year Improved Fish Smoking and Mangrove Restoration project (IFS) to support sustainable energy value chain in fish smoking markets in Ghana by improving both supply and demand side activities.

A field visit to Anyakpor coastal village by participants of the Smart Villages West Africa Regional workshop, organised by the Smart Villages Initiatives in collaboration with SNV was an eye-opener. Participants listened to women who smoke fish expressing their happiness for the introduction of the Morrison stove. They counted benefit to include increased volume of processed fish, increased profit, and minimal hazard caused by smoke.

Mrs. Helen Afiagbedefu smokes fish in Anyakpor village. She used the Chorkor before the introduction of the Morrison Fish Smoking Stove. In an interview, she disclosed that the process of smoking fish was now faster, less hazardous and more money-yielding. She told of how, after switching to the Morrison stove, women in Anyakpor noticed the difference, especially in terms of reduced health hazards caused by the smoke and increased income as a result of the volume of fish smoking, compared to the traditional method hitherto used.

“Fish smoking has become faster for us now. I now smoke 10 25-litre containers of fish in two to three hours by using Morrison stove. I used to smoke the same quantity in three days by use of traditional method. Now, if I want to smoke fish, I arrange wire mesh in layers. I then spread the fishes on each of the mesh, numbering three, four or five. I would then place a chimney on top of the wire meshes rails to reduce the smoke, which negatively affects our health,” Afiagbedefu said through an interpreter.

She said that, with the new stove, “women in Anyakpor are now making more money because we spend less time to smoke fish using this new stove than when we were using the traditional stove,” she further said adding that “prices of smoked fish range between 40 and 100 Cedis, depending on the size of the fish. I make an average profit of between 30 to 50 Cedis a month.”

It therefore means that if governments in West Africa would promote the use of renewable energy in smoking fish, Mangroves would be preserved and the health hazard caused by smoke would be averted.

In this regard too, the West African sub-region, experts say, should design reforms that would promote renewable energy sources, in which case the private sector would play a more active role.