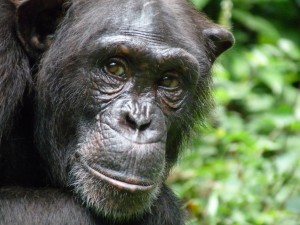 The Nigeria-Cameroon chimpanzee is the rarest and most endangered of four sub-species of chimpanzee currently found in Africa. Man’s closest living relative, the ape, is fully protected by Nigerian law, and now by communities also.

When a chimpanzee was recently killed by a hunter in the Mbe Mountains, the entire community of Bamba in Boki LGA, Cross River State, rose up in revolt to protest. Led by their able chief, Vincent O. Mkpe, the community quickly identified the hunter responsible for this heinous act as Ubua Stanley, and he was duly arrested.

A joint team from the Governor’s Task Force on Anti-Deforestation and the Cross River State Forestry Commission immediately travelled to the village, ensuring that the culprit appeared before the magistrate in Obubra in less than 24 hours. Justice was indeed swift and, using the newly revised forestry and wildlife law of Cross River State (2010), the man was sentenced to one year imprisonment with the option of a N100,000 fine.

An upcoming tourist destination, the Mbe Mountains are traditionally owned by the nine communities that surround the mountain. The area is managed for conservation and development by the Conservation Association of the Mbe Mountains (CAMM) with support from the Wildlife Conservation Society (WCS), and is home to other rare and endangered species such as the Cross River gorilla in addition to the Nigeria-Cameroon chimpanzee.

The importance of the Mbe Mountains as a wildlife haven, and a source of pride for Cross River State, has not gone unnoticed. Bamba the Gorilla was recently unveiled as the official mascot and logo for the 19th National Sports Festival scheduled for Calabar in November 2014.

Greta Thunberg is to become an ambassador for a...

Follow The Money (FTM), a transparency and accountability network,...

The President of the 77th session of the UN...