December 9, 2018 Comments Off on Countries act towards safer passage for migratory waterbirds 792 Views

After five days of intense discussions, the 7th session of the Meeting of the Parties to the Agreement on the Conservation of African-Eurasian Migratory Waterbirds (AEWA) concluded in Durban, South Africa on Saturday, December 8, 2018 with parties agreeing on measures to tackle threats from climate change and to increase the protection of individual species and seabirds. 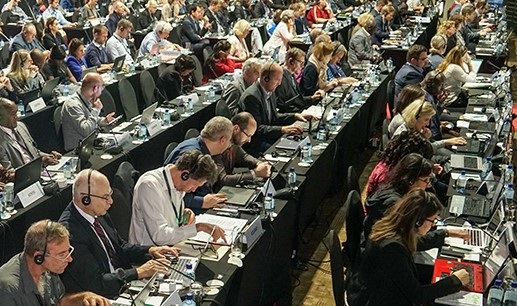 Delegates at plenary session during the second day of MOP7 in Durban, South Africa

The triennial Meeting of the Parties (MOP) is the Agreement’s principal decision-making body and among the main decisions taken in Durban were the adoption of the Strategic Plan and the Plan of Action for Africa for the period 2019-2027 as well as agreement on key species action plans focusing on some of the African-Eurasian flyway’s most charismatic and endangered waterbirds.

Jacques Trouvilliez, Executive Secretary of AEWA, said: “This MOP marks a milestone in the history of AEWA because we have adopted a new Strategic Plan and a Plan of Action for Africa for the next decade. Parties have done a tremendous job here in Durban to reach consensus on all subjects. With this mandate all countries will be able to work together to ensure a future for waterbirds across a flyway that stretches from the very tip of Africa, across the Middle East to the High Arctic.”

With reference to the plan for Africa, Barirega Akankwasah, AEWA National Focal Point for Uganda and Vice-President of AEWA MOP7, said: “The AEWA Plan of Action for Africa presents a renewed framework for responding to contemporary waterbird conservation issues in Africa. All AEWA contracting parties and partners should support its implementation. The Plan will undoubtedly improve the conservation status of waterbirds in Africa and across the Flyway.”

MOP7 was held under the theme: “Beyond 2020: shaping flyway conservation for the future” and delegates considered reports on the conservation status of the species listed under the Agreement and the effects of plastic on waterbirds as well as prioritising work on seabirds, thought to be among the most threatened groups of bird species in the world.

Parties adopted a number of International Single Species Action and Management Plans (ISSAPs and ISSMPs) while retiring those concerning the Light-bellied Brent Goose and Black-winged Pratincole and extending the duration of the plans for the Great Snipe, Ferruginous Duck, Lesser Flamingo, Eurasian Spoonbill, Black-tailed Godwit, Maccoa Duck, White-winged Flufftail, and Madagascar Pond Heron for a further ten years. The ISSAP for the Lesser White-fronted Goose was extended for another three years until MOP8. New ISSMPs for the Barnacle Goose and Greylag Goose were also adopted.

Among the other Resolutions adopted included one on AEWA’s contribution to the Aichi Targets and the Agreement’s relevance to the Sustainable Development Goals, strengthening the monitoring of migratory waterbirds, guidance on the implementation of the AEWA Action Plan, climate resilient flyways, financial and institutional arrangements.

“Among the many threats that waterbirds have to face are the effects of climate change as a key driver of species decline. We are working to make the flyway more resilient to climate change and of course we need everybody on board to fight against these effects not only on the habitats but on the birds themselves,” said Trouvilliez. “AEWA’s great strengths are its science-based decisions and the good cooperation between its member countries from northern Europe to southern Africa. The treaty also relies on the efforts of highly dedicated individuals, local and national bodies to achieve its goals.”

In recognition of these efforts, the AEWA Waterbird Conservation Award was established in 2005 to recognise individuals, as well as government and non-government organisations and enterprises which have made a significant contribution towards the long-term conservation and sustainable use of waterbirds in the African-Eurasian region.

Ohad Hatzofe, Avian Ecologist of the Israel Nature and Parks Authority, was declared the winner of the 2018 AEWA Conservation Award in the individual category, while the Egyptian Environmental Affairs Agency was successful in the institutional category.

The awards were presented at a special ceremony on the opening day of the meeting, where David Stroud MBE, Senior Ornithologist at the Joint Nature Conservation Committee, was also declared Honourary Patron of the Agreement having been part of the bedrock of AEWA since its inception and having contributed widely to its development and implementation.

Norway and the European Union were recognised as “Champions” of waterbird conservation, respectively for their support of the European Goose Management Programme and the AEWA African Initiative. Launched in 2014, the Migratory Species Champion Programme offers a portfolio of initiatives for donors willing to commit for three years or more to the implementation of a large programme targeting a species, a group of species or a cross-cutting issue.

MOP7 attracted a total of 289 participants, including delegates representing 56 of the 77 Parties, 10 Non-Parties and 42 observers from NGOs, IGOs and the press, making it one of the largest such meetings in the Agreement’s history, according to the organisers.

The next Meeting of the Parties will be held in Hungary in 2021.