COP23: Activists walk out of US organised pro-coal event

The opposition to Donald Trump’s outburst against the Paris climate accord has gained momentum at the ongoing UN climate change conference (COP23) in Bonn, Germany. 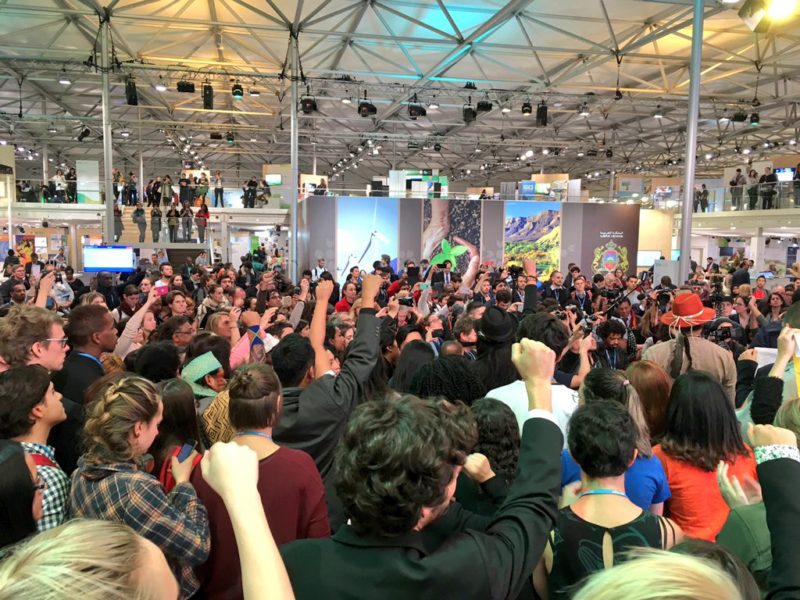 Participants kick against the US promoting coal at a side event, in Bonn

The agitations and outcry especially by civil society organisations led by the Pan African Climate Justice Alliance (PACJA) is evident that the plan to withdraw to the climate agreement by the US has created genuine apprehension among those who know the process best.

The turning point of the anti-Trump campaign was the walk out by demonstrators at a US organised pro-coal event at the COP23 conference on Monday, November 13, 2017.

While hundreds of events and presentations were dedicated to the role of renewable energy in tackling climate change, the US government held its first press briefing and side event on “The Role of Cleaner and More Efficient Fossil Fuels and Nuclear Power in Climate Mitigation” – leading to a demonstration by protestors who interrupted the event and staged a walk out.

“This is unacceptable. While the world struggles to go green, the US is pulling it back to brown coal and fossil fuel. We must choose between saving humanity or backing Trump’s dirty energy for profit,” says Agustine Njamnshi of PACJA.

As the second highest emitter in the world after China and the highest historically, US will, ironically, be the only country in the world to be out of the agreement – as Nicaragua and Syria have already expressed their intent to join the treaty, experts say.

Nazhat Shameem Khan, the Fijian diplomat who is leading much of the ongoing talks, said the conference needed to rebut any notion that the vision of the agreement had dimmed because of Donald Trump’s pull out.

Following the walkout in Bonn, protestors continued the demonstrations outside the hall. Panelists, meanwhile, presented to a near empty hall. The speakers at the event argued that coal would be used for some time to come and the way to go was to explore clean coal, which includes a system of technologies to clean up the emissions from coal, including Carbon Capture and Storage (CCS), and the potential of small nuclear plants.

The arguments were supported with reports published by energy think tanks, including the International Energy Agency (IEA).

But other stakeholders are against the idea of encouraging dirty energy. They are in complete support of innovative ideas towards green energy with global action towards renewable energy.

“This is the time to support the latest trends in the transformation of the energy industry, including cutting edge strategies by energy companies, burgeoning renewable energy players as well as investment community,” notes James Grabert, Director Sustainable Development Mechanism, UNFCCC.

Getting innovative ideas into action is a major solution pathway where representatives from business, government and civil society are delving into technological and policy innovation and new ways of collaborating to get the world on track to achieve the goals of the 2015 Paris Climate Change Agreement, he said.

Other development actors called on the private sector to play a major role in innovative solution drive.

“Faced with the growing problem of climate change, the instinct of companies is not to be passive but to take action and find solutions. Global climate policy must provide the framework necessary to encourage the private sector to increase investment and spur innovation to meet the objectives of the Paris Agreement,” said John Danilovich, Secretary General of the International Chamber of Commerce.

Meeting the Paris goal is also inextricably linked to the success of the 2030 Agenda’s 17 Sustainable Development Goals, in this case particularly Goal 9 – to build resilient infrastructure, promote sustainable industrialization and foster innovation.