The joint efforts of the European Union (EU), United Nations Office on Drugs and Crime (UNODC) and the Nigeria Immigration Service (NIS) for funding, implementing and partnership towards addressing the worrisome irregular migration and trafficking in persons has been commended. 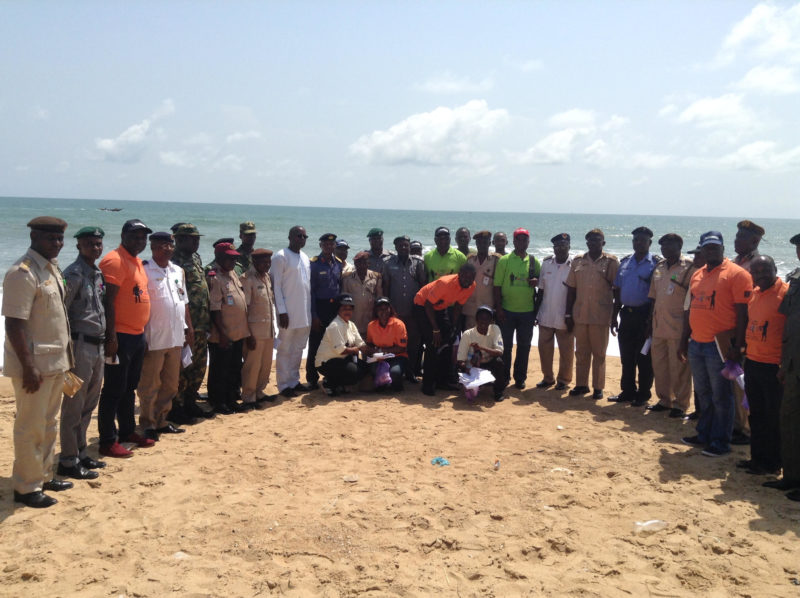 Group photograph of participants at the meeting

Giving this commendation on Day One of the UNODC Sensitisation of Seme Border Community on Smuggling of Migrants (SOM) on Monday, November 13, 2017,

the Comptroller, NIS Seme Border Command, Ibrahim Liman, stated that the programme was vital in improving and facilitating smooth and regular movement of persons along the border.

The programme is titled: “Promoting Better Management of Migration in Nigeria by Combating and Reducing Irregular Migration” which occurs, inter alia, through Trafficking in Person (TIP) and Smuggling of Migrants (SOM).

“Accordingly, the programme is not only relevant but also very timely when viewed against the backdrop of ease of doing business initiatives embarked upon by the Government of the Federal Republic of Nigeria, especially in the area of transparency, synergy and information sharing among the security agencies and other stakeholders,” Liman said.

He expressed belief in the aims and objectives of the programme, saying that it will be achieved. The programme’s objectives relate to repositioning and promoting better management of border and migration in Nigeria.

In his remarks, the Comptroller Nigeria Customs, Seme Area Command, Abdullahi Mohammed, while identifying porosity of the border as a challenge, sued for provision of logistics to the Command and sister agencies as well as a reward system for diligent officers to enhance their operations in combating not just the smuggling of goods across the border but also persons.

He commended the synergy between sister agencies at the Seme Border, stating that it has gone a long way in enhancing their tedious job of securing the nation’s border from smuggling of migrants, and even goods.

Also speaking, the Unit Commander, Federal Road Safety Corp (FRSC), Fatayi Bakare, maintained that enlightenment was ideal in the fight against smuggling of migrants, adding that it would greatly enhance the fight as it would help inform the public about the ills of the practice.

Earlier, the National Project Officer, UNODC, Mr Sylvester Atere, maintained that the objectives of the programme include encouraging Nigeria to maximise the potential of migration, considering that the country is opportuned to have a vibrant population with 70 percent within the range of 40 years.

The Comptroller Immigration, Border Patrol, Adediji Abiodum, who in his remark lamented that they have been battling with SOM, said: “It is germane and there is no better time for this sensitisation than now but this is not enough; we need to act. Hence, when we get back to our various beats, we need to carry the torch and enlighten more persons because migration is a security issue which is a challenge for all of us.”

In another development, Oba Akran of Badagry Kingdom, HRM De Wheno Aholu Menu Toyi 1, while receiving the UNODC and NIS team who paid a courtesy visit on him, assured of his assistance in the sensitisation of his people on the dangers of SOM, adding that it is very important in educating them on being properly informed, in order to deter them from the irregular practice.

Also, the Agololo of Badagry, High Chief, Dr Hundogan Samuel reiterated the timeliness of the sensitisation on SOM, especially to the women as many Nigerian women have lost their lives on the journey of no return.

He called on the government to do more in developing the country and curtail the irregular migration of many Nigerians who go in search of greener pastures.

Like Loading...
2017-11-14
admin
Previous: Bio-fortified crops are natural, different from GM crops – Expert
Next: COP23: Activists walk out of US organised pro-coal event