As the Eighteen Session of the Conference of the Parties (COP 18) to the United Nations Framework Convention on Climate Change (UNFCCC) enters its final week, the dissenting positions by the different countries and blocks are threatening a possible agreement on greenhouse gas (GHG) emission cuts. 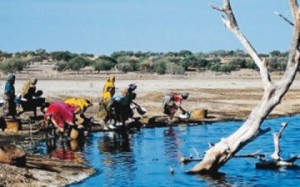 Predictably, the ongoing climate talks, taking place in Doha, Qatar, has highlighted the gulf in thinking about the phenomenon and how to tackle its attendant effects between the rich industrialised nation, which incidentally are the greatest contributors to carbon emission, and the poor nations.

Many observers are not so optimistic of a favourable outcome, which will be pleasing and fair to all.

While the Least Developed Countries – most of sub-Saharan Africa – and the Association of Small Island States both want a five-ear extension to the Kyoto Protocol, most developed nations want an eight-year extension Commitment Period 2 (KP2) from 2013 to 2020 to drastically cut down on greenhouse gases.

The European Union, Norway, Switzerland and Australia have all announced that they will sign up, nothing has been agreed yet. Poland initially deviated from the EU position, before appearing to reverse itself.

However, New Zealand, Japan and Canada have said they will not sign up; Ukraine appears undecided yet, while Russia is playing hard to get.

Major carbon emitters like China, India and Brazil have all indicated that they will sign up to KP2, but because they are categorised as “developing countries,” they will have no binding emission commitments.

For the LDCs and AOSIS, eight years means lower emission pledges for a longer period with their proposal likely to ensure higher emission cuts, but the EU is sticking to its gun.

Half way through the first week of the major climate talks of the year, a number of worrying fault lines have emerged, which have the potential to derail the Doha negotiations if they are not resolved, NGO experts have warned.

The Polish government, which will host next year’s major climate talks, is playing a unique blocking role towards further climate action in Europe.

Other potential flash points have emerged around the successful closure of the LCA track and climate finance.

Anja Kollmuss, from Carbon Market Watch, said the Polish government was trying to win respect as a climate leader by hosting the COP19 next year, but the truth was it was single-handedly preventing the European Union from raising its emissions reduction target to 30 per cent and from finalising a long term strategy to deal with climate change.

“The president of the climate talks needs to be able negotiate deals between parties and seal deals, but the Polish government has shown it is not capable of this, as it has repeatedly been against the wishes of the other 26 EU member states,” she said.

But the Polish government is also blocking progress in the negotiations in Doha by refusing to agree to the tightening of the rules around pollution permits in the second commitment period of the only legally binding climate deal till date, the Kyoto Protocol.

The Polish government wants to use pollution permits it did not spend in the first commitment period of Kyoto because it chose a target that was already met several times over, but allowing this would make a joke of Warsaw’s commitment to the treaty.

Also under a cloud is the question of whether rich countries will scale up their funding of climate action to developing countries to reach the $100bn commitment by 2020 and to capitalise the now empty Green Climate Fund.

Oxfam International’s Tim Gore said despite economic problems facing many rich countries, there were many options still available to them to fund climate action, such as a Financial Transactions Tax (due to be implemented in 12 EU countries next year) or a fair carbon change on the emissions from international aviation and shipping.

Mohamed Adow, from Christian Aid, said at the early stage of the talks, countries were already adopting unhelpful negotiation tactics around the successful closure of the long-term cooperative action track which came out of Bali in 2007 where finance was a key issue.

Before the talks began, international experts in the Climate Action Network said the Doha negotiations presented a turning point for world with much that needed to be achieved for COP18 to be branded a success.

CAN specifically, called not only for developed countries to sign on to the second commitment period of the Kyoto Protocol, but for the nations involved to increase their emission reductions within the treaty and to close the loopholes that existed within it, which would let 30 billion tonnes of carbon escape into the atmosphere.

It said developed countries also needed to increase their emissions reductions commitments as current pledges were so far inadequate to keep the temperature rise below 2 degrees as well as to lock in finance to support mitigation action by developing nations.

Tasneem Essop of the International Climate Policy Advocate for WWF said the inadequate performance by developed countries was eroding trust, which would have implications for the negotiations.

“While developing countries can take on more action, they can only do so if developed countries meet their commitments to provide finance,” she said.

Martin Kaiser, head of the Greenpeace delegation, said the way countries approached the Kyoto Protocol would set the tone for the talks.

He said, “EU leaders need to reject pressure from the coal and oil industry, and strengthen its legal limitation of atmospheric pollution without loopholes.

“This send out a challenge to US President Barack Obama and other world leaders to restart their international engagement in the interests of their citizens and millions people around the globe.”

The re-election of President Obama should allow more concrete action from the United States, according to Alden Meyer, Director of Strategy and Policy, Union of Concerned Scientists.

He said, “We need the US to hit the reset button on their existing negotiating positions and to make a real commitment to keeping temperatures below 2 degrees.

“Specifically, the US negotiators should be more forthcoming in Doha on just how the US will meet its pledge to reduce its emissions by 17 per cent below 2005 levels by 2020, as well as how it will achieve the near-total decarbonisation of the US economy needed by mid-century to meet the 2 degree goal.”

A first of its kind event was also recorded at the negotiations on Saturday when thousands of activists from the Arab region and around the world staged a historic march in Doha calling for climate action.

The march is thought to be the first ever event of its kind in the history of modern-day Qatar.

Activists from more than 15 Arab countries such as Qatar, Mauritania, Morocco, Jordan, Libya, Tunisia, United Arab Emirates, Palestine, Lebanon, Iraq, Algeria, Sudan, Oman, Egypt and Bahrain also called on their own leaders to pledge to reduce their emissions by 2020.

The critical role of technology in reducing greenhouse gas...

A WWF report reveals that - at a time...