Ahead of the climate talks set to begin in Doha next week, BASIC Ministers reaffirmed that the Kyoto Protocol remains a key component of the international climate regime and that its second commitment period (2CP) is the key deliverable. 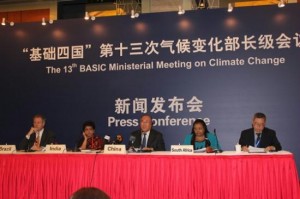 A media briefing during the 13th BASIC Ministerial meeting in Beijing, China

Comprising Ministers and their representatives from Brazil, South Africa, India and China, the Ministers stressed that the 2CP is the essential basis for ambition within the international climate regime.

The BASIC Ministers, who met in Beijing, China, from 19-20 November, also “underscored the importance of an effective and legally binding 2CP through a ratifiable amendment (of the Kyoto Protocol’s Annex B which sets out the emission cuts for Annex 1 Parties for the 2CP) implemented from 1 January 2013.”

The first commitment period of the Protocol expires on 31 December 2012.

In a joint statement issued at the conclusion of the 13th BASIC Ministerial meeting on Climate Change, the Ministers “called upon developed country Parties to the Kyoto Protocol to raise their level of ambition in their quantified emission limitation and reduction objectives (QELROs) in Doha, consistent with what is required by science and their historical responsibility.”

They called for the continued discussion on higher QELROs by the meeting of the Kyoto Parties.

According to the joint statement, the Ministers “reiterated that developed country Parties that do not commit to QELROs in the second commitment period of the Kyoto Protocol should undertake quantified emission reduction commitments under the United Nations Framework Convention on Climate Change (UNFCCC) that are comparable in terms of form, magnitude and compliance.”

The Ministers “confirmed their understanding that developed countries that are not Parties to the Kyoto Protocol or do not participate in its second commitment period would not benefit from the Clean Development Mechanism of the Kyoto Protocol.”

The participants at the Beijing Ministerial meeting were Mr. Xie Zhenhua, Vice Chairman of the National Development and Reform Commission of China; Ms. Edna Molewa, Minister of Water and Environmental Affairs of South Africa; Ms. Mira Mehrishi, Additional Secretary of the Ministry of Environment and Forests of India; and Ambassador Andre Correa do Lago, Director of the Department of the Environment and Special Affairs, Ministry of Foreign Affairs of Brazil.

Also present at the meeting were Ambassador Mxakato-Diseko of South Africa, as the representative of the President of the 17th meeting of the Conference of Parties (COP17), Ambassador Mourad Benmehidi, Permanent Representative of Algeria to the United Nations as Chair of the G77 and China, as well as the representatives of Fiji, a member of the Alliance of Small Island States and incoming Chair of the G77 and China, and Qatar, incoming President of COP18/CMP8.

Egypt, a member of the Arab Group, and Nepal, the incoming Chair of the LDCs (Least Developed Countries) group, were also invited.

In their joint statement, the BASIC Ministers “welcomed the outcome of the United Nations Conference on Sustainable Development (Rio+20) and the adoption of the document The Future We Want.”

They stressed that “the political consensus reached by the leaders in Rio not only provided the highest political guidance to the Doha Conference and the future climate negotiations, but also reaffirmed that Parties to the UNFCCC and the Kyoto Protocol should protect the climate system on the basis of equity and in accordance with the principle of common but differentiated responsibilities and respective capabilities.”

They “underscored that the implementation of the balanced Durban package is essential to the success of the Doha Conference” and “reiterated that in the overall interest of raising global ambition, the developed countries should take the lead and scale up ambition not just in mitigation but also in adaptation, finance, technology transfer and capacity building.”

The Ministers “emphasized the urgency to make progress in the work of the Ad Hoc Working Group on Long-term Cooperation (AWG-LCA) and bring it to a meaningful conclusion pursuant to the Bali Action Plan, addressing all elements including ambitious and comparable emission reduction targets by the developed country Parties, adaptation, finance, technology development and transfer and capacity building.”

In the joint statement, they “underlined the need to further define the scope of the ‘Review’ prior to its launch, with a view to facilitating a comprehensive assessment of the implementation of the Convention.”

At COP16 in Cancun, Parties decided “to periodically review the adequacy of the long-term global goal [limiting temperature rise to below 2 degrees Celsius above pre-industrial levels]… and overall progress towards achieving it, in accordance with the relevant principles and provisions of the Convention” and also requested the AWG-LCA “to further define the scope of this review and develop its modalities…”. The first review is to start in 2013 and conclude before 2015.

ALSO READ:  13 dead in Missouri floods as Mississippi is closed to vessels

The BASIC Ministers “further reaffirmed the centrality of equity in the UNFCCC process and called for progress on all key issues including equitable access to sustainable development, technology related intellectual property rights (IPR) and unilateral measures and the continued discussion of such issues by the appropriate bodies of the Convention after the conclusion of the AWG-LCA.”

According to the statement, the Ministers “underlined the importance of means of implementation for developing countries and stressed that developed country Parties should honour their commitment to provide financial, technology transfer and capacity building support to developing country Parties, and to finance the effective operationalisation of the institutional mechanisms. Ministers reiterated the importance of achieving the goal of providing 100 billion dollars per year by 2020 as committed by developed country Parties and underscored the need for a roadmap to scale up financial resources in order to avoid the funding gap for the period from 2013 to 2020.”

They “stressed that public finance from developed country should be the main source of funding to support developing countries’ actions on climate change, in particular for their adaptation and capacity building. Ministers also called for concrete information on the implementation of the Fast Start Finance to ensure transparency.”

The Ministers “reiterated that the objective of the Durban Platform negotiations is to further strengthen the current multilateral rule-based climate regime, ensuring the full, effective and sustained implementation of the Convention after 2020. The Durban Platform is by no means a process to negotiate a new regime, nor to renegotiate, rewrite or reinterpret the Convention and its principles and provisions. As agreed by all Parties, both the process and the outcome of the Durban Platform are under the Convention, governed by all its principles and provisions, in particular the principles of equity and common but differentiated responsibilities and respective capabilities.”

They “welcomed the timely launch of the work of the Ad Hoc Working Group on the Durban Platform (AWG-DP) and progress made at the meetings in Bonn and Bangkok. Ministers recognised the usefulness of roundtable format of discussions in Bangkok. They expressed the desirability for further discussions in the current analytical and conceptual phase, with a view to planning its work in accordance with Decision 1/CP17 and the agenda adopted.”

The Ministers “noted with grave concern the ambition gap between what developed country Parties have pledged and what is required by science and their historical responsibility. Ministers stressed that the pre-2020 ambition should primarily be addressed in the context of discussions under the Ad Hoc Working Group under the Kyoto Protocol (AWG-KP) and AWG-LCA and any supplementary and complementary actions shall be in accordance with the principles and provisions of the Convention.”

In the joint statement, “Ministers noted with consternation that the mitigation contribution by developing country Parties is much greater than that by developed country Parties who should take the lead in combating climate change. They object to any attempt to transfer to developing countries the commitments and obligations of developed countries.”

They also “noted the intention of the EU to ‘stop the clock’ on the implementation of the international aspects of the European Union-Emissions Trading Scheme (EU-ETS) legislation by one year. They reaffirmed the importance of multilateralism in addressing climate change in accordance with the principles and provisions of the Convention and reiterated their strong opposition to any unilateral measures on international aviation and shipping as well as similar intentions regarding other sectors.”

The Ministers “stressed the utmost importance of the unity of G77 and China, and reaffirmed the commitment of BASIC countries to continue working together to strengthen it. Ministers stressed that BASIC countries share deep concerns about the urgency of tackling climate change, particularly with SIDS [Small Island Developing States], LDCs and Africa, and reiterated their continued efforts to enhance South-South cooperation.”

The Ministers also welcomed the offer by India to host the next BASIC Ministerial Meeting in the first quarter of 2013. 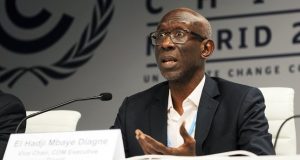 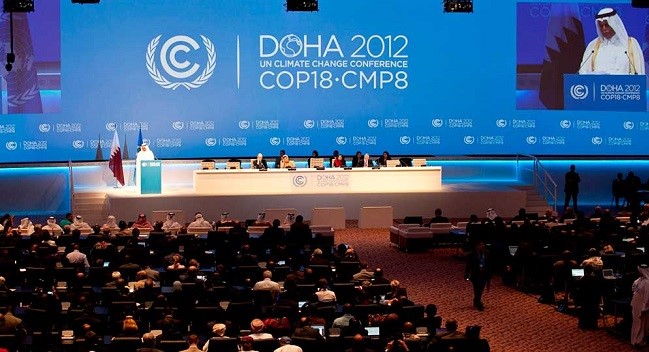 The Doha Amendment, which established the Kyoto Protocol’s second commitment period in 2012, is set ...