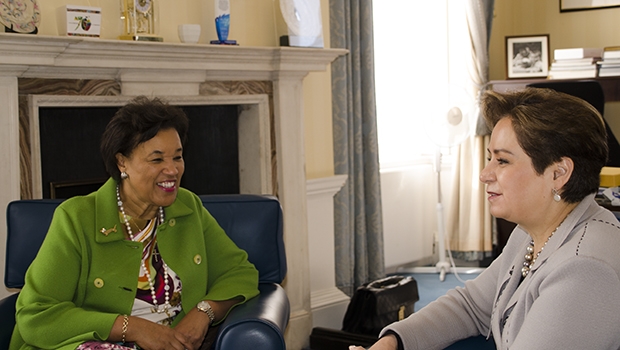 Patricia Scotland, Secretary-General of the Commonwealth (left), with Patricia Espinosa, Executive Secretary of the UNFCCC

Patricia Scotland, Secretary-General of the Commonwealth, met with Patricia Espinosa, Executive Secretary of the UNFCCC, at Marlborough House in London on Friday, February 24 2017 to discuss how the Commonwealth Secretariat can support global climate action efforts.

Ms Espinosa credited the Secretariat as being a leading partner for the delivery of the Paris Agreement, singling out the establishment of the Commonwealth Climate Finance Access Hub as a mechanism to help small and vulnerable countries build local capacity and mitigate against climate impacts.

The Commonwealth is an intergovernmental institution with “trusted and important relationships” with countries, Ms Espinosa said. “It’s an important partner for us in this endeavour to be as effective as possible in promoting implementation.”

“We are talking about complex processes of building up national development plans, building up legislation and making projects that are subject to funding from international sources. So it’s a very, very important relevant contribution,” she added.

In addition, Ms Espinosa credited the Commonwealth Heads of Government Meeting (CHOGM) in Malta in November 2015 for its role in helping to galvanise international action to deliver the Paris Agreement in December that year.

Commonwealth member states were also among the first to ratify the Paris Agreement, helping to ensure it entered into force with the required 55 ratifications representing 55% of global emissions.

Secretary-General Scotland has made tackling climate change one of the major priorities of her tenure in office, urging the world to move from “from agreement to action” at the COP22 conference in Marrakech, Morocco, last year.

Fiji, a Commonwealth member state, will host the next round of climate talks, COP23, under the UNFCCC in Bonn, Germany, later this year.

Secretary-General Scotland said, “The next round of climate talks chaired by Fiji is historic, being chaired for the first time by a small island developing state. The Commonwealth will offer its fulsome support to Fiji and the UNFCCC at it prepares for COP23.”

“Our shared goal is to help Commonwealth member countries access the support they badly need to prepare for the potentially devastating impacts of climate change. Together we seek to deliver on the Paris Agreement and ensure it has an enduring positive legacy, especially for the smallest and most vulnerable countries.”