Governor Akinwunmi Ambode of Lagos State may have bitten more than he can chew, in his bid to sign into law the New Environment Bill passed recently by the House of Assembly. Environmental Rights Action/Friends of the Earth (ERA/FoEN) and other civil society organisations (CSOs) have vowed to mobilise Lagosians to ensure that Governor Ambode is stopped from signing the “obnoxious” bill into law. 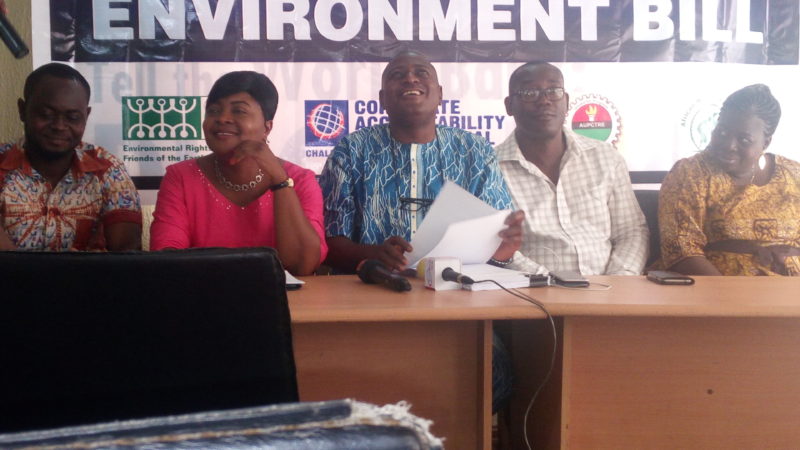 On February 20, 2017, the House of Assembly passed “A Bill for a Law to Consolidate all Laws Relating to the Environment for the Management, Protection and Sustainable Development in Lagos State and for Connected Purposes”.

The lawmakers had cut short their six-week recess to attend to the bill and, after passing it, immediately announced they were going for another recess.

This “clandestine move” of absconding in the name of recess, according to the Deputy Director, ERA/FoEN, Akinbode Oluwafemi, was made because the lawmakers knew that activists would come after them immediately on the issue.

He was speaking on Monday, February 27, 2017 at a press conference in Ikeja on the New Environment Bill.

Other speakers at the event that drew both local and foreign journalists in the online, print and broadcast media expressed their readiness to resist the “wicked” bill.

Oluwafemi said “the bill is a conspiracy” against Lagos people.

One of the issues with the bill is the allocation of the fund and guarantees. Section 7(2)(a) says: “The state shall secure the payment in respect of contracted services and concessions for long-term infrastructure investments with an Irrevocable Service Payment Order (ISPO) as the first line charge on the state’s internally generated revenue.”

The law also provides that nobody distributes or sells water in the state without permission from the Department of Water Resources.

“Ordinarily, news that new environmental guidelines have been set should elicit joy. Alas, the environment was not the main concern of this bill. This new bill is nothing but a clandestine manoeuvre to unleash extreme capitalism, business without morals, and politics without values on Lagos State. It is draconian, obnoxious and anti-people,” the ERA/FoEN deputy director said.

ERA/FoEN disclosed that “the new law was only subjected to a hurriedly-conducted public hearing by the House Committee on the Environment on February 9, 2017. At the time, we had frowned at the committee’s deliberate invitation of few civil society and grassroots campaigners to the hearing, and the fact that we only had a few hours to review a 190-page proposal.”

EnviroNews gathered that the state government also held a press briefing on February 27, 2017 over the same issue.

Achike Chude of Joint Action Front (JAF) wondered why “Nigerian governments take pleasure in subjecting the people to untold hardship”, adding: “Lagos is a litmus test for their plan for other states of the federation.”

While noting that water has no alternative, unlike other necessities of life, he said “with the way they are going, one day they will commercialise the air we breathe”.

For Chude, “if Ambode loves Lagosians, he should refrain from signing the bill into law”, as it will only benefit few vested interests.

President of African Women Water, Hygiene and Sanitation Network, Agnes Sessi, maintained that “it is the duty of governments to provide citizens with water”. Since this seems not to be happening, she called on the people to prepare for another challenge from government.

“The law is not acceptable to us in Lagos. We say no to privatisation of water,” she added.

Founder and Executive Director of CEE-HOPE, Betty Abah, lamented that “the very vulnerable in Lagos are under threat”, as government is set to fight them.

She revealed that while South African government ensures that every home gets a certain quantity of water free every day, governments in Nigeria are positioned to hurt the poor.

“With this law, epidemic looms”, as people will source for water anywhere possible, she added.

Desperation of government will lead to the hasty signing of the bill into law, according to Biodun Bakare of Amalgamated Union of Public Corporations, Civil Service, Technical and Recreational Service Employees (AUPCTRE).

All the activists at the event vowed that even if Ambode signs the bill into law, they will mobilise Lagos people to resist it.