Not long ago, my friend and co-founder at Connected Development (CODE), Oludotun Babayemi, exited from the Executive Management of CODE and moved to a non-executive role as member of the Board of Trustees. This means that he will no longer have day to day responsibilities or routine involvement in CODE activities, though he will continue to consult, advise and support me and the management team. 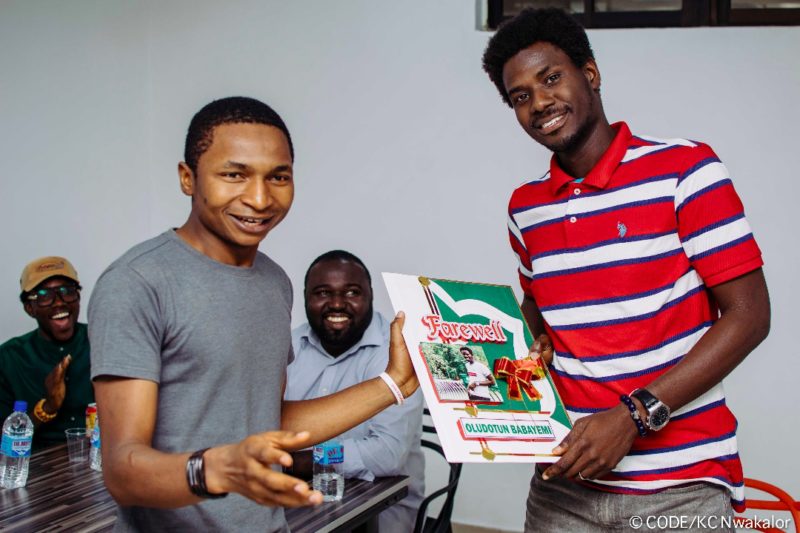 I am delighted to say that Dotun’s exit in a very remarkable way symbolises the core spirit and value of the CODE brand and Follow The Money movement. The essence of CODE is not only captured in its written goals, mission and vision, but in an unwritten belief in the evolution of personal development.

For those readers who are not conversant with CODE, it is useful to state who we are. Founded in 2012, CODE is a non-government organisation (NGO) whose mission is to empower marginalised communities in Africa. We strengthen local communities by creating platforms for dialogue, enabling informed debate, and building capacities of citizens on how to hold their government accountable through “Follow The Money”, our governance accountability and transparency initiative.

CODE provides marginalised and vulnerable communities with resources to amplify their voices with independence and integrity while providing these grassroots populations with information that engenders social and economic progress. To enhance effective democratic governance and accountability, we create platforms (mobile and web technologies) that close the feedback loop between citizens and the government. Thus, with global expertise and reach, we focus on community outreach, influencing policies, practices, and knowledge mobilisation.

Our commitment to participatory capacity and community building and monitoring and evaluation creates effective and sustainable programs even within the most challenging environments.

Nevertheless, against this backdrop, we have as our fundamental drive, the hunger to evolve into a global brand that provides a platform for participatory governance, and youth development. We want to see a future where today’s CODE leadership shall be replaced tomorrow by a new cadre of civil society leaders who grew up within our ranks, and evolved into strong thought-leaders while we, the old guard, move on to higher national and global duties.

We want to see Next-Generation leaders who are well-equipped for tomorrow, trained from the emerging societal challenges of today.

This is why we recognise the importance of mentoring. I believe that for there to be a seamless transition into the next generation there needs to be a conscious mentorship agenda on the part of thoughtful leaders of today as well as a willingness on the part of today’s followers to enter what I call a “leadership conveyor belt” in order to be transported through the assembly line of Future Leader manufacture.

For instance, before Dotun left the Executive Team, he consciously planned an exit strategy which sought to “recruit and rejig” a replacement team in the CODE programme value chain.

When we started recruiting A – Team staff last year, he planned to have each new member take the pieces of his role in scaling the organisation, and he provided support for their various tasks while he made his transition to work with the Board. It was when he saw the success of his transition strategy that he felt convinced that the coast was clear to make the launch up the next rung in the ladder.

For me, it was a fulfillment of the CODE dream – establishing a template for leadership evolution.

It is a situation I can relate to, having experienced a similar transition in my task in my other life at the African Youth Initiative on Climate Change (AYICC), when I moved from an Executive role as the Communications Director to a non-executive advisory role as member of the Board. Likewise, some day in the future, I will bow out as the Chief Executive of CODE to a non-executive role.

Just like Dotun is doing today, I will have the privilege of being able to step back and watch CODE develop and grow while I explore other opportunities to add value to the society and impact my world.

I believe robust and sustainable transition is the only way we can emphasise and stay committed to the ongoing success of CODE in particular, and of the wider transparency and accountability community in general. We must remain passionate about open-data, technology and citizen participation, as this is the only real doorway into the journey to deepen democracy by empowering more communities with enough knowledge to be able to hold their government accountable.

And this brings me to a very vital point. It took a long time of personal thought and research to come to the conclusion that the future of Nigeria and indeed Africa depends on active participation of civil society in the political process. A democratic state cannot be stable unless it is effective and legitimate, with the respect and support of its citizens.

Civil society is a check, a monitor, but also a vital partner in the quest for this kind of positive relationship between the democratic state and its citizens. Therefore, the best model would be when the civil society, empowered with their developmental experience and capacity, finds itself playing active role in politics.

There are reasons for this conclusion. First of all, the most basic role of civil society is to limit and control the power of the state.  For instance, as is the situation in Nigeria, when a country is emerging from decades of military rule, it needs to find ways to check, monitor, and restrain the power of political leaders and state officials.

Civil society actors serve as a watchdog, and raise public concern about any abuse of power.  They campaign for access to information, including freedom of information laws, and rules and institutions to control corruption. They promote political participation by educating people about their rights and obligations as democratic citizens, and encouraging them to critically examine electoral manifestoes and vote in elections.  They help develop citizens’ skills to work with one another to solve common problems, to debate public issues, and express their views. They play an important role in mediating and helping to resolve conflicts – by adopting bargaining, accommodation and compromise. These are all functions that guarantee a functional, sustainable state.

Secondly, civil society organisations help to develop the other values of democratic life:  tolerance, moderation, compromise, and respect for opposing points of view. And, without this deeper culture of accommodation, democracy cannot be stable. These values cannot simply be taught; they must also be experienced through practice.

So, I see a future where civil society actors-turned politicians shall help to develop programs for democratic civic education in the schools; revise the curricula, rewrite the textbooks, and retrain teachers in order to educate young people about the mistakes of the past and teach them the principles and values of democracy.

Furthermore, because they have ingrained capacity as a result of their experience, these future leaders shall strengthen democracy by providing new forms of interest and solidarity that cut across old forms of tribal, linguistic, religious, and other identity ties. Democracy cannot be stable if people only associate with others of the same religion or identity.  They will also play the vital role of engineering electoral best practices by ensuring that the voting and vote counting is entirely free, fair, peaceful, and transparent.

Thirdly, political recruitment of today is flawed. We need a new model to identify and train new types of leaders who have dealt with important public issues and can be recruited to run for political office at all levels and to serve in state and national legislature. To achieve this, civil society mentorship processes of today could become political recruitment platforms of tomorrow.

By Hamzat Lawal (activist and currently the Co-Founder/Chief Executive of Connected Development (CODE). He is working to build a growing grassroots movement of citizen-led actions through Follow The Money for better service delivery in rural communities. He is also a Leader of the Not Too Young To Run Movement)