Cheetahs may have once prospered, but they certainly aren’t anymore. 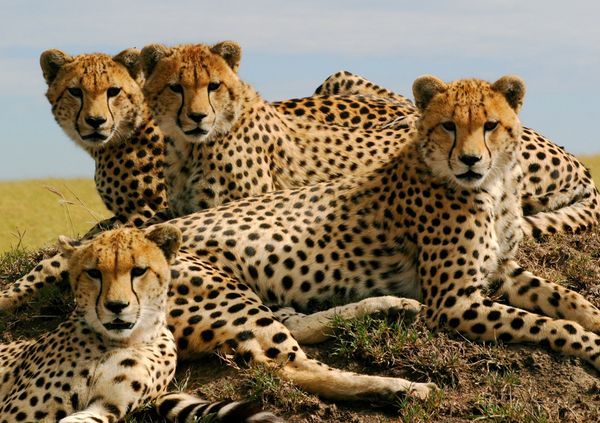 Scientists examining the worldwide population of these swift, spotted cats have found that there are only 7,100 left in the wild, surviving on just 9% of their original land range – and that they should be upgraded from “vulnerable” (population decreasing) to “endangered” (seriously at risk of extinction) on the International Union for the Conservation of Nature’s Red List of Threatened Species (IUCN Red List).

The grim findings, published in PNAS, show that studying cheetahs in protected areas may make the species’ status look rosier than reality – and that conservationists may need to switch tactics if they want to prevent cheetahs and other threatened species from going extinct.

As humans have spread across every continent on Earth, it has often bode ill for nearby populations of large mammals. Tens of thousands of years ago, mammoths, saber-toothed cats and giant ground sloths roamed California – but these and other charismatic megafauna dwindled and went extinct around the same time that humans arrived on the scene. (Scientists are still studying whether humans, climate change or both helped lead to these species’ extinction.)

“The spread and dominance of humans across the world during the Anthropocene have precipitated a sixth global biodiversity extinction crisis,” the study authors wrote. 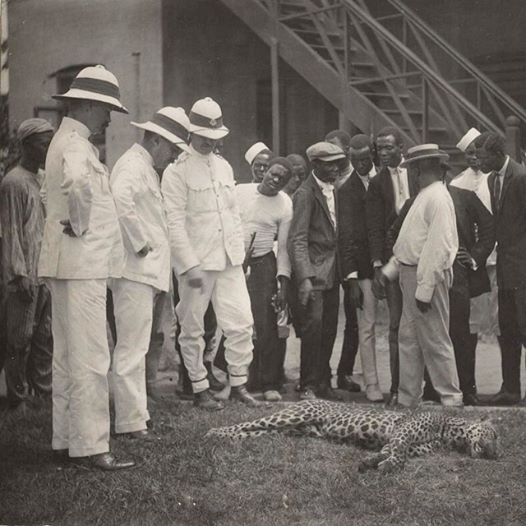 Photo shows onlookers standing over a leopard reportedly killed in Lagos, Nigeria in 1912. Today, over a century later, not a single leopard exists in the now highly urbanised Lagos city

The Anthropocene is the term used for the Earth’s current geological age – the chapter of its history in which human activity has profoundly affected the environment and global climate. One place where that effect is highly noticeable is in today’s extinction rate: The industrialisation and spread of human civilisation in recent times has accelerated the decline of much of the world’s iconic wildlife, be they giraffes, rhinoceroses, elephants or lions, among many others.

Large land-based mammals, the authors wrote, “can be especially vulnerable to anthropogenic impacts, such as habitat loss and fragmentation, human-wildlife conflict, illegal wildlife trade, and overharvesting for bushmeat or traditional use.”

Cheetahs, as it turns out, are no exception to that trend of decline. Known formally as Acinonyx jubatus, cheetahs today survive on only 9% of their past distributional range, according to the study authors. That’s a big deal for large carnivores – particularly for cheetahs that need a lot of space. Their home ranges can exceed 3,000 square kilometers.

As they have for other species, scientists, government officials and conservationists have worked to create protected areas to shelter these shrinking populations against poaching and deadly confrontations with farmers and other humans, among other risks.

But population estimates based on protected areas don’t tell the whole story, since wild animals don’t stay within these human-defined boundaries, the authors pointed out. And those inaccuracies are especially problematic for large mammals, because while cheetah populations might look OK within those well-patrolled areas, the dangers immediately increase for any populations living outside of those zones.

“Wildlife management authorities may be required to monitor wildlife within PAs (protected areas) but not outside them, and monitoring is usually more challenging outside PAs, because wildlife are more elusive and occur there at lower densities,” the study authors wrote. “This deficit leads to a lack of information on populations outside PAs, where they are generally more threatened, resulting in an overly favourable assessment of status.”

So for this paper, Sarah Durant of the Zoological Society of London and her international team of colleagues put together a comprehensive data set of cheetahs’ distribution and status, hoping to get a clearer picture about how cheetahs were really doing.

The findings were sobering. There appear to be only about 7,100 adult and adolescent cheetahs left in the wild, restricted to less than a tenth of their original range. On top of that, a full 77% of their current range actually falls outside of protected areas, which means the vast majority of the cheetahs’ range exposes them to a host of threats, from hunting or trafficking by humans to conflict and competition with humans.

“Establishing and maintaining protected areas (PAs) are key tools for biodiversity conservation,” the study authors pointed out. “However, this approach is insufficient for many species, particularly those that are wide-ranging and sparse.”

The scientists recommended that cheetahs be raised from “vulnerable” to “endangered” on the IUCN Red List.

In the meantime, conservationists, scientists and policymakers may have to shift their focus toward making those unprotected areas safer places for cheetahs to survive, rather than focusing all their efforts on the protected zones.

“For this shift to occur, new policy, management, and financial tools are needed that promote coexistence between people and wildlife outside and adjacent to PAs,” the authors wrote. “This innovation will require concerted action from governments and effective cross-sectoral engagement across the conservation and economic development communities.”

Doing so could provide a model for dealing with other threatened species – although getting there will present a new and complicated set of challenges, the scientists said.

“Securing sustainable solutions for wildlife and people will not be easy, particularly where threatened species may share their range with marginalised and vulnerable communities and where human development challenges are substantial,” the authors wrote. “However, unless this transformation is achieved, the future of wide-ranging and highly threatened species, such as cheetah, is in doubt.”