The membership of the committee comprised scientists, engineers, administrators, federal and state civil servants, economists, lawyers, bankers and industrialists, among others.

With the hindsight of history, they knew that it was engineering infrastructure that ignited the first industrial revolution in Europe and the United States from 1760 to 1840.

The Federal Government concurred with the recommendations of the 150-member committee and set up NASENI in 1992, with the late Prof. Gordian Ezekwe as the first Vice-Chairman and Chief Executive Officer.

Since Ezekwe left office in 1997, eminent engineers and scientists were appointed by the Federal Government as chief executive officers of NASENI.

The mission of NASENI is to establish and nurture appropriate and dynamic science and engineering infrastructure-base for achieving home-initiated and home-sustained industrialisation through the development of relevant processes, capital goods and equipment necessary for job creation and national economic well-being among others.

If NASENI has not performed as expected, the blame cannot be on the establishment alone, but on failure to provide the needful to enable it live up to expectation.

Prof. Mohammed Haruna, the current Executive Vice-Chairman of NASENI, alluded to this when he appeared before the Senate Joint Committee on Finance and National Planning to answer questions on the agency’s 2021 financial projections.

Haruna in his presentation lamented that the agency had never received one per cent remittance from the federation account as provided for by the 2004 National Assembly Act.

After listening to Haruna’s submission, the committee, led by Sen. Olamilekan Adeola, ordered the Accountant-General of the Federation to, from September this year, commence the disbursement of one per cent allocation from the federation account into the coffers of NASENI.

His words: “The Act setting up NASENI was the Act of the National Assembly and the Accountant-General of the Federation cannot be allowed to flout the law.

“Therefore, since the AGF is here, please ensure that the executive starts implementation of the law from September this year because NASENI has the potential to develop and industrialise the Nigerian economy through the core mandates given to it by the extant laws.”

The COVID-19 pandemic ravaging the world has shown the innovativeness and ingenuity of the engineers and scientists working with NASENI and other Nigerian institutions.

Dr Ogbonnaya Onu, the Minister of Science and Technology, announced recently that the Federal Government had commenced the local production of ventilators and disinfectant spraying devices to battle the ongoing coronavirus pandemic.

Onu spoke in Abuja when he launched the newly produced devices by NASENI.

He said the first consignment of the devices would “support breathing efforts of Nigerians who are already down with the pandemic.

“As its response to the COVID 19 disease, the agency has manufactured a set of disinfectant sprayer devices to assist in sanitising Nigerian cities, streets and the environment including ventilators,” he said.

Onu, represented by the Minister of State, Mohammed Abdullahi, said the Buhari administration was not resting on its oars to prevent Nigerians from dying as a result of COVID-19.

Hajiya Ramattu Aliyu, the Minister of State for the Federal Capital Territory, who inspected the COVID-19 equipment, said the fight against the disease ab initio was a challenge to the ingenuity of Nigerian scientists, engineers and all other fields of medicine to support the government to ward off the pandemic.

“Necessity is the mother of invention” the minister said, even as she commended the initiatives by NASENI.

She expressed confidence that the devices would help sanitise Nigeria environments when fully deployed.

According to Aliyu, it will be a thing of pride to deploy technologies and initiatives by Nigerian scientists and engineers to solve Nigeria problems, especially a pandemic like COVID-19, now that it seemed there was no particular nation in the world with the magic wand to assist others.

The minister commended the management of NASENI and the Federal Ministry of Science and Technology for the initiative to manufacture locally produced ventilators and disinfectant safety devices.

The minister also said that the intervention would not only save the country from further depletion of scarce foreign reserves but also the feat marked the opportunity for Nigeria intellectual community to once again pride itself to have used science, technology and innovation to solve Nigeria health challenge.

The minister said inter alia, after the inspection: “I think this development of NASENI interventions for the fight against COVID-19 is really an achievement that had come with a very great delight.

“The innovations not only could safely disinfect persons totally even with their own clothes on, but also clear evidence that Nigeria is getting somewhere.

“It is a testimony that we are not only locked-down to cry helplessly for outside world’s help as a nation, but this is a worthy response to the challenge by our very brilliant scientists and knowledgeable people to go back to the drawing board to proffer solutions to societal problems with what they have acquired in school, various trainings and technologies experiences.

“Rome was not built in a day, God willing the very best of our own people would come out this time around.

“God willing Nigeria will come out with a breakthrough that the world would celebrate soon.

“Nigeria too would come out with our own vaccines and not all the time we would have to be looking up to other nations to save us, rather we shall save ourselves as Nigerians.

“I am surprised at what I am seeing and also I am impressed by the ingenuity demonstrated by scientists and engineers in NASENI.”

Prof. Mohammed Haruna, Executive Vice-Chairman of NASENI who spoke, said that  “given the right support and proper funding, NASENI has the capacity to roll out 40 ventilators per week and also produce various safety disinfectant devices for COVID-19.”

Besides NASENI, Nigeria’s tertiary institutions are not left out in the quest to boost engineering infrastructure to solve contemporary problems, including the ravaging COVID-19.

The Vice-Chancellor of UNN, Prof Charles Igwe, who spoke at the launching said that the machine was an improvement over the manual hand cleaning machine that dispenses detergent and water.

“This machine is different from what we have seen before, it performs four functions at a time without the user making any physical contact,” Igwe said, after using the machine to clean his hands and measure his temperature.

He challenged the Faculty of Engineering and other faculties in the university to come up with more fabrications, products and designs that would have a direct impact on the society.

“We should go beyond writing research papers and engage in the fabrication of machines, equipment and designs that will solve the numerous problems in our society,” he said.

Igwe congratulated the Dean of Faculty of Engineering, Prof. Emeka Obe and his team for the feat.

Obe, while explaining the processes that led to the manufacturing of the machine, said that it was produced within four weeks by the Auto Service Centre of the faculty.

“The production cost, estimated at over N300,000, was contributed by the staff in the service centre,’’ the dean said.

He appealed for sponsorship to enable the faculty to mass produce the machine which he believed would simplify the process of monitoring.

Unarguably, the developments at NASENI and other Nigeria’s engineering research centres are indicative of the innovativeness and ingenuity of Nigerian engineers and scientists.

What is required to boost infrastructure that will promote national growth and prosperity is adequate funding. Government and other stakeholders should do the needful. 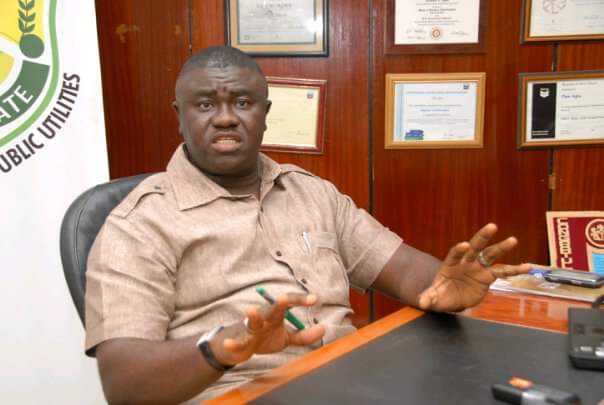 The Federal Government has said that the country needs data to understand climate challenges in ...