May 2, 2018 Comments Off on Bonn talks: Finance for climate action turning a taboo subject for rich countries 995 Views

Africa continues to suffer enormous social and economic losses in billions of dollars as a result of climate change impacts. 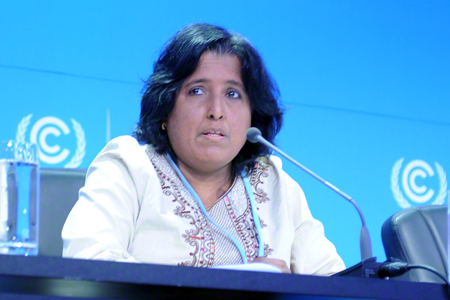 A vulnerable continent that is burning and flooding at the same time needs finance to be able to achieve mitigation, adaptation and technology goals.

But without a clear roadmap for delivering $100 billion per year by 2020, as pledged by developed countries since 2009, developing countries are hindered in their ability to carry out their own climate actions.

Negotiators from the world’s governments are gathering in Bonn, Germany from April 30 to May 10 for three simultaneous meetings under the United Nations Framework Convention on Climate Change (UNFCCC).

Ironically, the United States, which has signalled it will not want to be a party to the Paris Agreement when implementation starts in 2020, is sitting and negotiating as a party.

“Our worry is that the world will once again be pressured to accommodate the United States and this is really very unfair because the concessions are already made in the Paris Agreement,” said Meena Raman of the Third World Network. “The solutions for addressing the climate challenge have to be fair and have to ensure that once again the poor and the planet are not sacrificed.”

Climate finance has become a sticking point in the climate talks since the withdrawal of $2 billion by the U.S. under Trump’s administration.

And it is increasingly becoming a taboo to discuss climate finance with other developed countries, observed Augustine Njamnshi of the Pan African Climate Justice Alliance (PACJA).

“When finance becomes a taboo in this discussion, then there is no good faith in the discussions,” he said. “You want to sit here and tell nice stories when whole families are being swept by floods in West Africa?”

The conditional Nationally Determined Contributions (NDCs) from developing countries in implementing the Paris Agreement will cost more than $4.3 trillion to be achieved.

“Africa strongly supports the Adaptation Fund to serve the Paris Agreement. However, we are dismayed with the shifting of goal posts by our partners who intend to delay the realisation of actual financing of full costs of adaptation in Africa,” said Mithika Mwenda, Secretary General of PACJA at a press conference. “We urge our partners not to further delay the decision which is key in providing adaptation support to Africa.”

UN climate chief, Patricia Espinosa, has outlined three important goals to accomplish by the end of 2018 – building on the pre-2020 agenda, which charts the efforts of nations up to the official beginning of the Paris deal; unleashing the potential of the Paris deal by completing the operating manual; and building more ambition into countries national pledges.

But African civil society is demanding the rich world offers more detail on its commitments to climate finance without any delay in the Paris Rulebook beyond COP24.

“The effective ambition of developing countries depends on the provision of means of implementation by developed countries,” said PACJA in a statement. “We strongly urge our African governments to rethink critically on the progress of climate talks as any position that contradicts that real climate change implications to Africa then will shift the burden of climate change to African countries.”