Agriculture is the mainstay of most developing country economies, which are the most vulnerable to climate change impacts through extreme weather events such as drought, floods, landslides, storm surge, and soil erosion, affecting their predominantly rain-fed agricultural productivity. 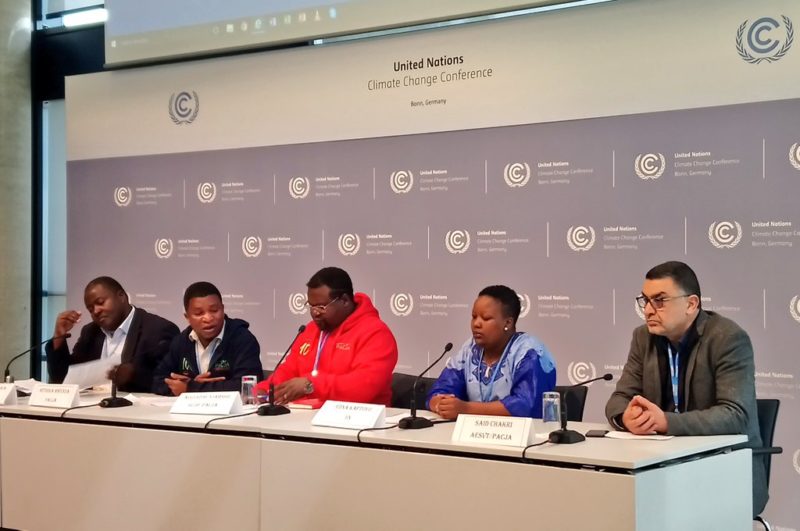 Representatives of civil society groups at the conference in Bonn

In consideration of the vulnerability of their agricultural systems to climate change, developing party negotiators have been pushing for it to be considered as a stand-alone work programme at the negotiating table.

And the push finally paid off at COP23 where decision 4/CP.23 on the “Koronivia joint work on agriculture” was adopted, paving way for issues related to agriculture to be addressed, taking into consideration the vulnerabilities of agriculture to climate change and approaches to addressing food security.

However, while this was a milestone, African civil society groups still want more ambition on agriculture considering its importance to their countries in relation to adaptation, as most countries depend on agriculture for livelihood.

“Noting the significance of agriculture in Africa, the decision on agriculture during UNFCCC COP23 was a big milestone,” said Mithika Mwenda, Pan African Climate Justice Alliance (PACJA) Secretary General. “We caution our African governments however to urgently ensure that there is a joint work-plan for agriculture in ensuring that it receives the required means of implementation.”

According to Mithika, further attention should be paid to the type of agriculture being promoted, saying Africa is not interested in industrial agriculture as practiced by developed countries but rather, promoting resilience of smallholder farmers.

“Our interest is to promote resilience to agriculture, the context in Africa is how do we support that smallholder farmer, that pastoralist whose cows are dying due to drought every time, so we are talking about; how do we now change that, so it’s important that we look at it from this context,” explained Mwenda at the on-going SB48 Climate Talks in Bonn.

In fact, the African civil society is linking agriculture to loss and damage, another long-standing issue that developing parties have been pushing at the negotiating table.

The argument is that developing countries and Africa, in particular, continues to suffer enormous economic losses in billions of dollars as a result of climate change impacts. Coupled with un-costed social losses due to climate induced displacement of persons triggering conflicts, the African group is dismayed to keep hearing that the answer to loss and damage is insurance – a concept which they believe is a far-fetched dream in Africa.

“Insurance works out in developed countries but not in developing countries especially in Africa, where the concept is hardly understood,” said Richard Kimbowa of Uganda Coalition for Sustainable Development.

Kimbowa says Africa “needs a predictable and easy-to-understand financing approach for loss and damage,” adding that severity of climate change impacts are not the “normal adapt and move on.”

He explained that it is for this reason that the loss and damage mechanism is being pushed to address such losses that have become more severe for communities to easily cope.

Closely connected to agriculture and loss and damage, is gender. It is worth noting that there is considerable progress that has been made in terms of gender policies that support activities on adaptation, mitigation, finance, technology development and transfer, including capacity building, under the convention.

“Off course, one of the decisions made at the highest level is that we have the gender national focal point persons but, so far, only 22 states have put forward national gender focal point persons to the UNFCCC, so we urged countries to see the importance of gender in the climate processes,” said Edna Kaptoyo of the Indigenous Information Network.

The call is for the Parties to increase their efforts in ensuring that women are represented in all aspects of the convention process, to ensure that gender mainstreaming is achieved in all processes, and activities of the convention.

Overall, African civil society are demanding more ambition on means of implementation, which they believe is key to the attainment of the set targets in the Paris Agreement.

This, they say, is in consideration that effective ambition of developing countries depends on the provision of means of implementation by developed countries, without which there would be no predictable pathway for implementation of the Paris Agreement.

Therefore, the next 10 days will see a lot of lobbying and activism from African CSOs as they push for Africa’s climate change and development agenda.