October 1, 2020 Comments Off on Bayelsa pledges to tackle flooding, other environmental challenges 629 Views

The Bayelsa State Government has expressed readiness to tackle perennial flooding, oil pollution and other environmental problems in the state.

Commissioner for Environment, Mr Iselema Gbaranbiri, made the assertion in an interview in Yenagoa, the state capital, on Thursday, October 1, 2020.

Gbaranbiri said he embarked on tour of communities shortly after assumption of duty three weeks ago in line with the state government’s desire to alleviate the sufferings posed by environmental challenges.

He said the ministry was in discussions with foreign partners to find lasting solutions to environmental challenges facing the state.

“My visit to some communities of the state, a few days after my assumption of office was to show the premium and the prosperity the government led by Gov. Douye Diri places on the Environment and people of the state.

“We’ve started discussions with an U.S.-based organisation, Worldwide Energy on partnership on our environmental challenges,” the commissioner said.

According to him, government will be convening an environment summit for practical solutions to the issues.

The commissioner decried the activities of sand dredgers in some communities.

“If urgent measures are not taken, some of the adversely affected communities may soon go into extinction due to uncontrolled sand dredging,’’ he said.

He said the government had developed a policy on recycling of solid wastes by private sector operators with a view to converting wastes to wealth.

According to him, this will assist in engaging the unemployed and creating jobs while caring for the environment.

He warned those involved in illegal oil bunkering and vandalism to desist from the acts, noting that oil theft and vandalism had graver economic and social implications.

The commissioner said plans were underway to inaugurate experts to find lasting solutions to the perennial flooding in Yenagoa.

According to him, the government intends to construct well planned channels to drain the waters into the major rivers across the state for a free onward flow into the ocean. 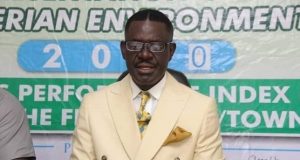 Centre for Peace and Environmental Justice (CEPEJ), an NGO, has urged stakeholders in the oil ...